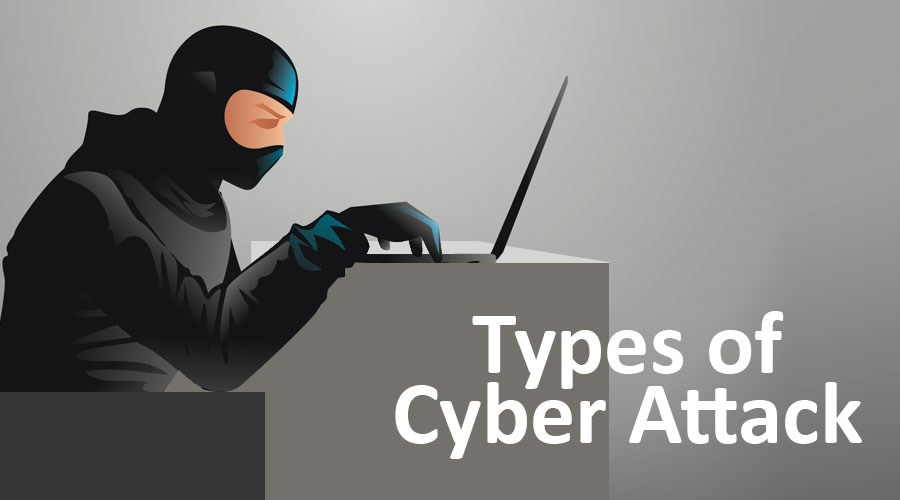 Introduction to Types of Cyber Attack

In the contemporary period, the facility of communication between devices is growing day by day. With the exponential growth on the Internet, the urge to protect things in public interface also has to be secured. The system that is online must have to be protected against attacks that can lead to compromise it, we call such an attack a cyber attack. The organization or enterprises are much prone to get attacked due to the lucrative information it has stored in their systems. The good thing about the current market is, it has enough numbers of professionals to protect the enterprises from the attack, but the dynamic technologies demand the professionals be ready to play best in defense.

What is a Cyber Attack?

Ransomware attack – Ransomware attack may be defined as the kind of cyber attack in which all the files of the system get encrypted and the hacker demands the organization to pay if they want to regain access to those files. Once the system is attacked successfully using this mode of attack, the only option remains is to pay the hacker which could cost the organization too much. It could be protected using the best defense system and keeping the system assessment frequent.

Man In Middle(MitM) attack – In this attack, the hackers try to catch the information while it is transmitted on the Internet. They try to sniff it and then study the information very carefully to check if it can help to breach the system. To protect your system from this attack, the communication from your device to the server should be encrypted. For instance, if you want to make the client and server communication secure, you can opt for the SSL service. The data which is encrypted using a secure sockets layer is less prone to this kind of attack.

Denial of service attack – It may be defined as the type of cyber attack where a host sends too much requested to the target server so that it could be crashed. The server that is not able to handle that many requests stop working for a while and not allow any user to work with it since everything is restored. In order to protect the server from this attack, the load balancer is used. The role of the load balancer is to support the server while it starts getting too many requests that it cannot handle alone. The extended form of this attack is DDOS(Distributed Denial Of Service) in which so many hosts sends a request to the target server where each host sends enough requests to crash the target.

Cross-site scripting attack – Cross-site scripting attack is the kind of cyber attack in which the  JavaScript is used to exploit the web application. The web application which is vulnerable to this kind of attack could be detected manually by trying to fill and submit the text fields and check if they are running proper check or just letting the script to be run without any sanitization. The severity level of this attack is high enough to get some useful information to the hacker. To fight against this attack, the application has to be developed in a manner that it should always check the values submitted by the used instead before processing it.

Phishing attack – It is a very common kind of attack that falls under the category of social engineering. In this attack, the hacker sends the authenticated user a URL of the webpage that looks exactly the same to the legitimate website and tricks the user to submit their credentials. The credentials that were used by the hacker to get full access to the system and make their desired changes. Some of the websites have developed the system to protect their system from phishing attacks, but one must have to be very careful before submitting their credentials anywhere.

The cyberattack is very common these days and all the organizations that are managing their public interface web application are the best platform for the attacker to showcase their skills to get some fame or monetary benefit. On one hand where it is true that the system as being attacked regularly, there are several measures that have to be considered seriously to protect the systems from getting beached.

There is a various application available in the market that is based on artificial intelligence and ample power to detect the vulnerability existing in any of the systems. The regular checks in the network make it very secure and the attacker will find it not that easy to be broken. The domain of cybersecurity is very vast and one has to be up to date in order to stay strong against the attacks. Every day the organizations are moving ahead in terms of cyber protection and behind that, the cyber professionals play a vital role and also getting good opportunities these days.

This has been a guide to Types of Cyber Attack. Here we discuss the introduction, what is a cyber attack? and types of attacks with their proper explanation. You can also go through our other suggested articles to learn more –