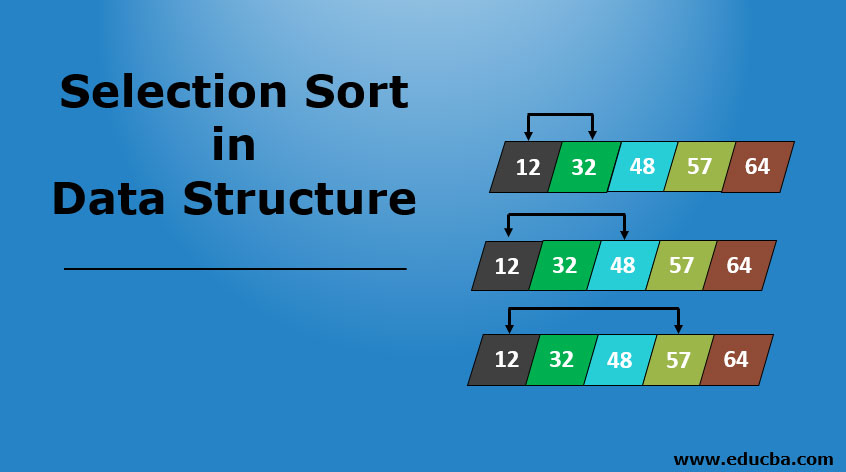 Selection sort is one of the sorting algorithms which arrange the data in ascending order. What selection sort does is that it searches for the lowest value element in the array and then brings it to the first position. Later, it finds the lowest value element from the remaining array, and after searching such an element, it brings it to the second position. Likewise, the algorithm goes on sorting the array finally ending up with the sorted array. Here we will discuss the algorithm and implementation of selection sort in data structure with steps.

The program code to implement selection sort is as given below. This program can be implemented in any programming language of our choice. We implemented the program in C programming. Go through the program and each of the coding elements, including variables, statements, and loops to understand how these elements function.

We tested the above program with multiple inputs, and the program worked correctly. Click on the Run option and pass the required input to validate the program. Let’s go through the various inputs that we passed into and the results that we got.

In this case, we passed five different two digits numbers. While passing the elements, ensure that they are separated by space or enter. E.g. if we intend to pass three numbers 23, 45, and 87 then pass them as 23 45 87 and not as 234587 or else the compiler will consider it a single element. The following screenshot shows this.

In this case, we tested the program by passing an array containing eight elements. The array has elements present in the descending order. When executed, the program worked correctly giving the array sorted in ascending order of the numeric elements. Let’s go through the following programming output.

In this case, we passed nine different numbers, as mentioned earlier, while passing numbers separate them with space. We must pass a specified number of elements only. As shown in the below screenshot, we got the input array sorted in the ascending order. So, this shows that our algorithm has worked correctly.

How the Selection Sort Algorithm Works?

To understand how the algorithm works, we are considering an array that we passed in the second input example described above. The array consists of eight elements present in descending order. These eight numeric elements are 98, 93, 87, 64, 57, 48, 32, and 12. The steps followed by the selection sort algorithm to sort these elements in ascending order are described below.

Step 1: Initially, the input array looks like as shown:

Step 3: Now, the first element remains intact, and all the operations happen with the rest of the array elements. The process works the same as in the above step. From the remaining array, the lowest element is brought to the second position. So, here 32 will come to the second position and 93 will go to the position of 32. The array after swapping looks like as shown below.

Step 4: The next smallest element in the remaining array is 48. Now, 48 gets swapped with 87, and after the positions of these two elements are changed, 48 comes to the third position, and the array looks like as shown in the below screenshot.

Step 5: If we see the array now, we find that it almost looks as if it has got sorted. In the remaining array now we have only two elements left which are 64 and 57. Had 57 been at 64’s position, the selection sort would have given us the ascendingly sorted array in the above step itself. However, now, the position of these two elements must be changed. So, selection sort brings 57 at the position of 64, the former numeric element being lower than the latter. After the swapping takes place, the array looks like as shown below.

This is a guide to Selection Sort in Data Structure. Here we discuss the introduction, how it works, the program, and the algorithm for selection in the data structure. You can also go through our other suggested articles to learn more –