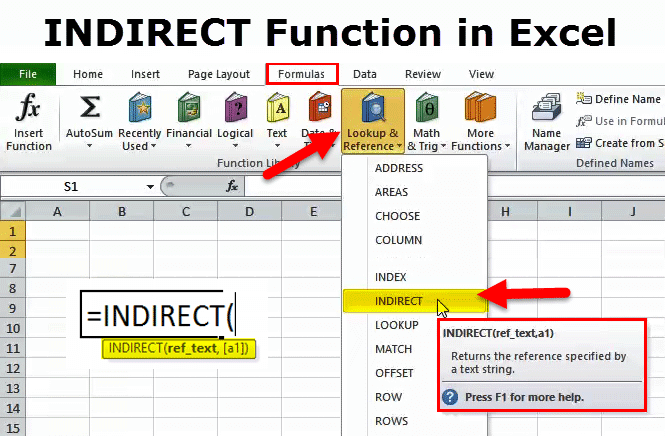 An INDIRECT function consists of two arguments. One is Ref_Text which is a mandatory argument, and the second one is [a1].

Note: If the last argument is omitted by default, excel will take TRUE as the argument.

How to Use the INDIRECT Function in Excel?

The below table shows the sales amount of different sales managers across 4 regions. In cell H4, we need to get the total of the region, which is mentioned in cell G4.

A combination of INDIRECT & Named Ranges is invaluable in this kind of context. Named Range will define the range of cells in a single name.

Step 1: Create a named range for each region. Go to the Formula tab and then click on Name Manager. 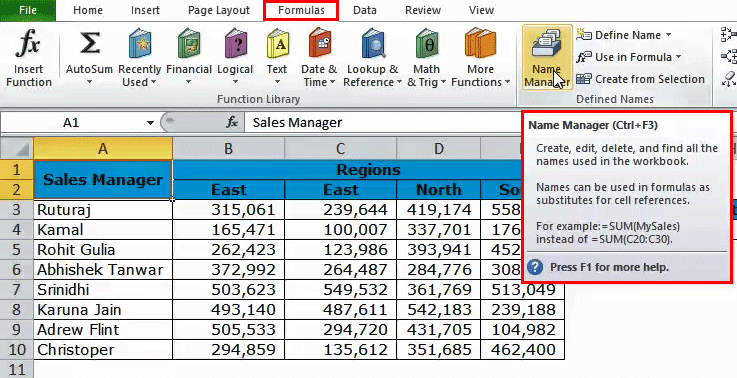 A New Name dialog box appears. Give the name as East.

Note: Repeat this task for each region. Give the region name to each name manager. 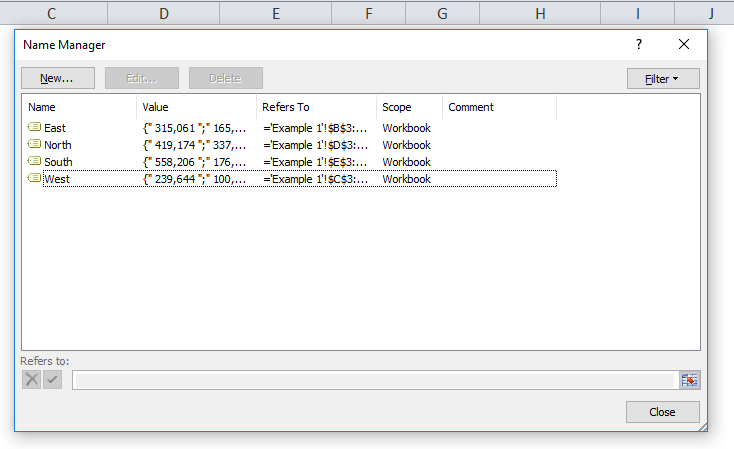 Step 2: Now apply the INDIRECT function along with the SUM function to get the total in cell H4.

Note: Change the Region name in cell G4 to get the total of each region.

Use the previous sales amount data of different sales managers across 4 regions. In cell H7, we need to get the average total of the region, which is mentioned in cell G7.

Now apply the INDIRECT function along with an AVERAGE function to get the total in cell H4.

This example will look into the R1C1 style reference with INDIRECT to return the last cell value. Here we used the COUNTA function to get the last column number. 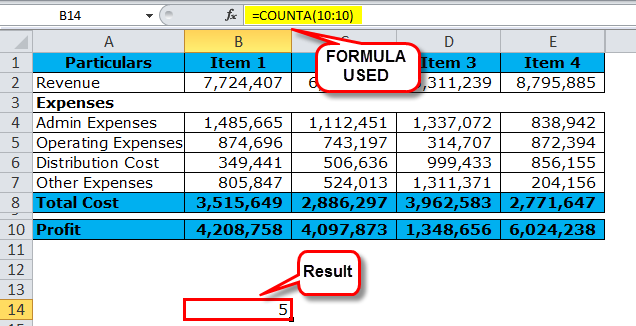 In the above formula, we have concatenated R10 (Row 10) with C10 by using the COUNTA function. COUNTA will return the value 5 (last column number). A combination of both these will give “R10C5”,, i.e. Indirect will value Row 10 and Column 5.

The FALSE part of the argument will request for an R1C1 style of the cell reference.

As the Item numbers keep increases, this function will always give the last item’s profit value.

The table below applies the VLOOKUP function in cell B15 to get the sales value based on cells B13 & B14. 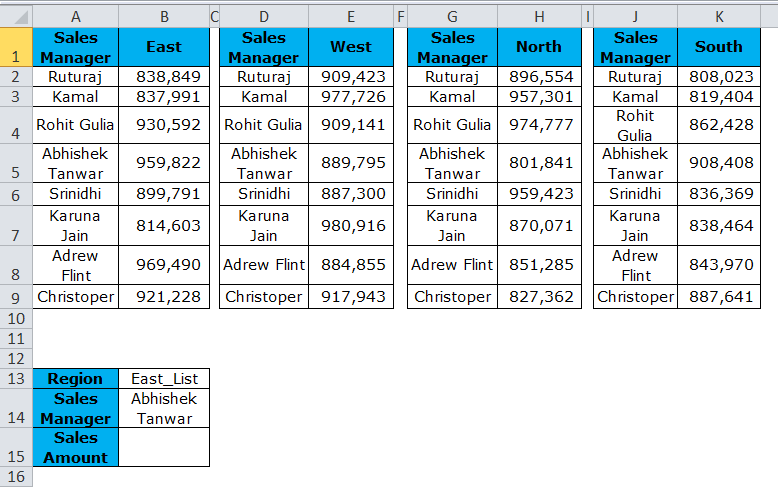 Steps involved in before applying Vlookup. 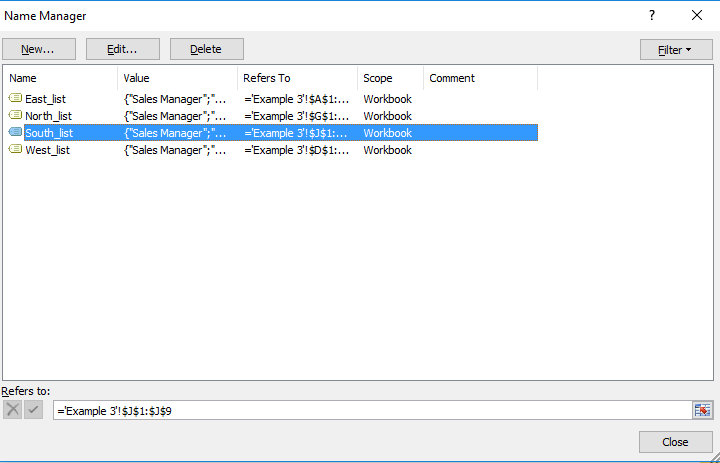 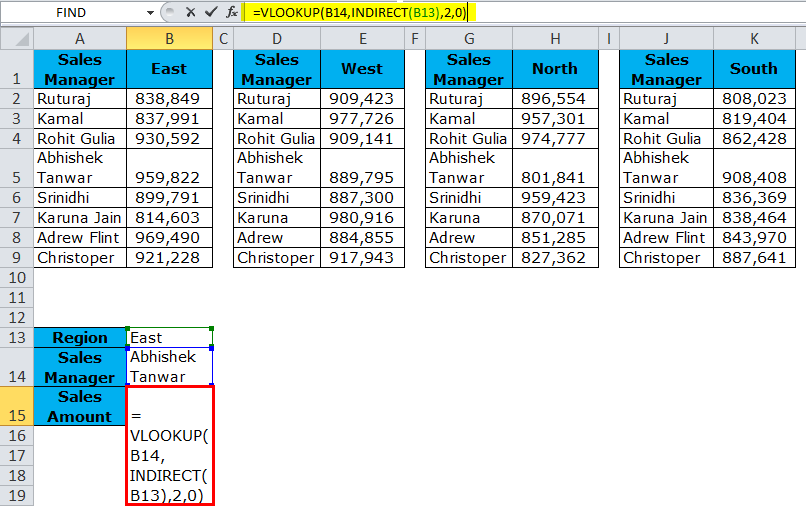 Since we have defined a range list with East_List, West_List, North_List, South_List, what the INDIRECT function will do is it will give a reference to that particular region list. Therefore, Vlookup will consider that as a table range and give the respective sales manager the result.

From the drop-down list, change the play with different regions & different sales managers.

An INDIRECT function can also retrieve the cell value from another worksheet. This example will give an explanation to this.

Below images will show different sheets in a single window. 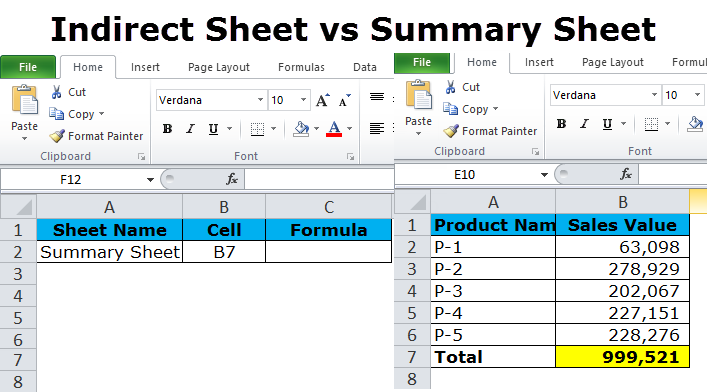 Note: INDIRECT Function is not the most often used formula. But it could be a lethal weapon in extreme cases to save a lot of time and automate the cell value. Try to use it regularly, and you will get a hang on it.

This has been a guide to INDIRECT. Here we discuss the INDIRECT Formula and how to use the INDIRECT function along with practical examples and downloadable excel templates. You may also have a look at these other lookup and reference functions in excel-