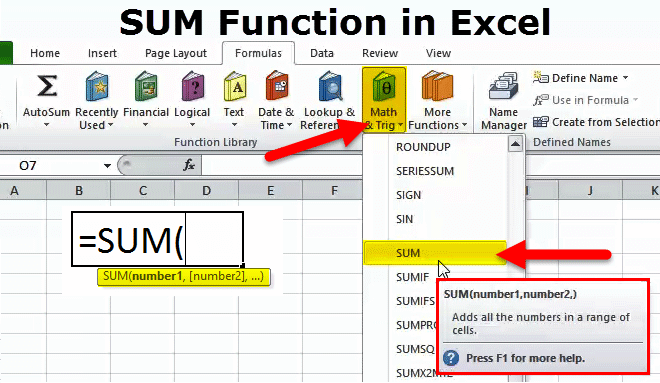 SUM in Excel (Table of Contents)

The Formula for the SUM function is as follows:

WHERE ‘num1’, ‘num2’ and ‘num_n’ denotes numeric values or numbers which you wish to add

How to Use the SUM Function in Excel?

This SUM is very simple easy to use. Let us now see how to use the SUM Function with the help of some examples.

In the excel sheet, go to the ‘Math & Trig’ option under the Formulas Section in the Menu Bar, a drop-down menu will open up, in that select SUM, fill up the argument for an output.

Column C contains quarterly sales values, here we have to simply specify the first and last cell in a range of cells to be added up. 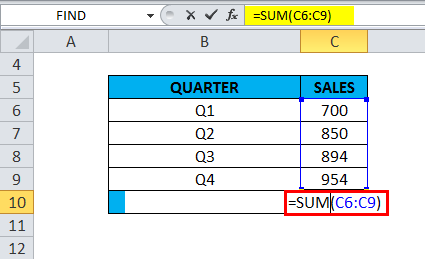 It returns the total quarterly sales value as 3398 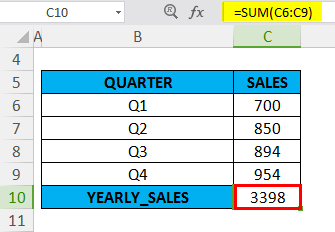 SUM formula is applied in cell “C15” i.e. =SUM(B15,B16), Here We have to select the cells that contain the values we want to add together. In the argument, cell references ‘B15’ and ‘B16’ needs to added & is separated by a comma

The SUM function returns the value 6

In this example, an Excel sheet with the cell references ‘B21’, ‘B22’ and ‘B23’, contains the decimal values 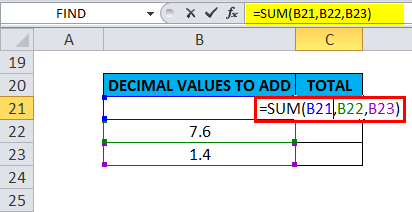 The SUM function returns the value 17.2 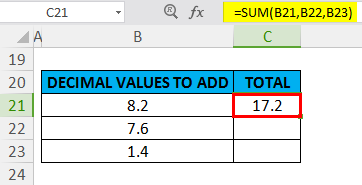 The SUM function returns the value 5

Example #5- More than one range of cells

In the earlier examples of the SUM Function, we have only added up to one range at a time

In the below-mentioned example, will add up several or multiple ranges of cells at once. All the cells in all the ranges are added together to give a grand total

In the excel sheet, company quarterly sales data is present in each column. There are four quarters sales data

Here, we need to find out the total sales from four-quarter sales data. we have to simply specify the first and last cell in a range of cells to be added up for each quarter or columns

In the SUM formula, we need to specify four separate ranges in the argument & is separated by comma i.e.

In a range of cell, it contains sales data between cell F20 to F24, I need to apply auto sum function for that range 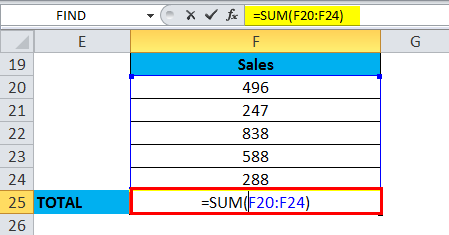 In a cell “F25”, click “Alt + =” Excel SUM formula will be appearing in the active cell along with cell reference. Then we need to press the Enter key to complete SUM function 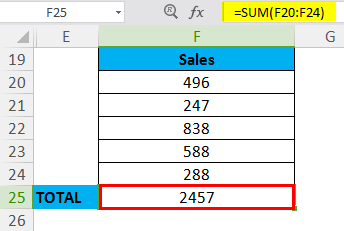 This has been a guide to SUM Function. Here we discuss the SUM Formula and how to use SUM along with practical examples and downloadable excel templates. You can also go through our other suggested articles –