What is Java Inheritance? 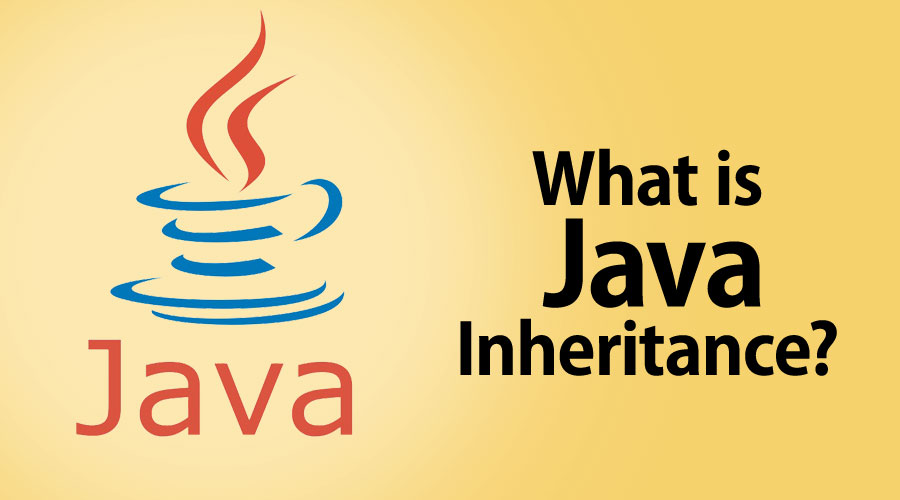 A subclass is a class that comes from another class. A subclass follows the condition and behavior of all their ancestors. The concept of superclass identifies a class’s direct ancestor and all their ascendant classes.

What is Java Inheritance?

That leads to the query, “Where will it all start?” The top-most class, the derived class, is an Object class described in java.lang. The object is a root structure of classes.

The below figure shows those two types of classes: 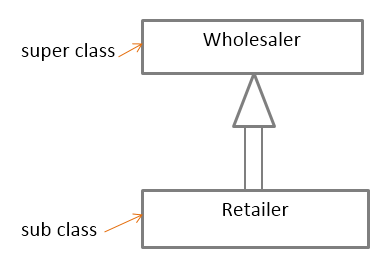 Every class inherits directly from the Object class 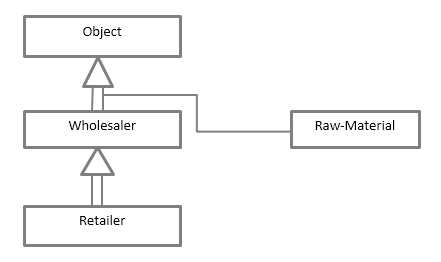 In the above diagram

The extended keyword shows the parent class that the subclass is usually inherited and cannot be applied as identifiers.

In public class, Raw-Material no needs to extend the keyword; it is directly accessing the Object class.

Understanding Java Inheritance with an example

Inheritance describes the is-a relationship among a Superclass as well as a Subclass. Extends and implements key terms prefer to express inheritance in Java.

Different types are as per given below. 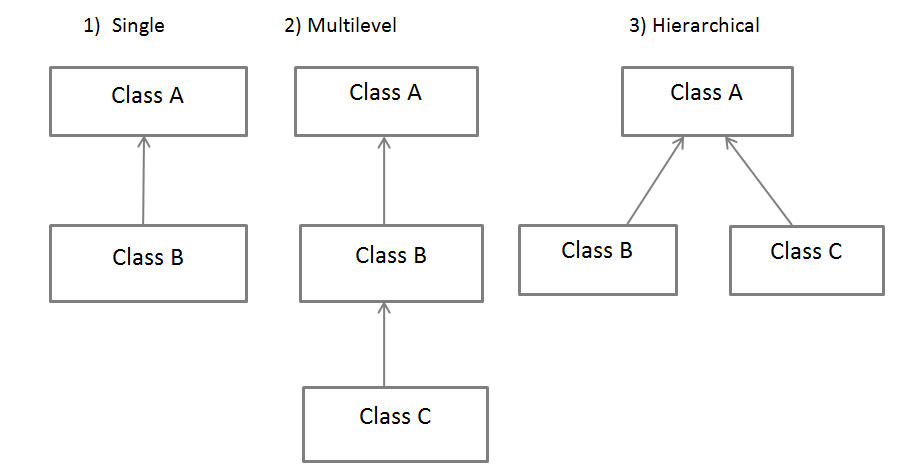 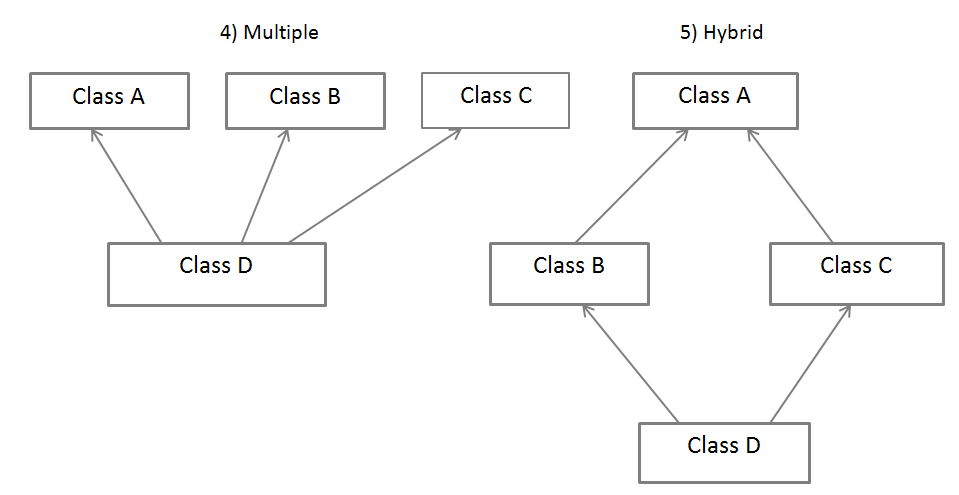 If a class extends an additional class, such a form of inheritance is called single-level inheritance.

Class B has extended class A, so class B uses the method displayA() of class A because it is its own method. 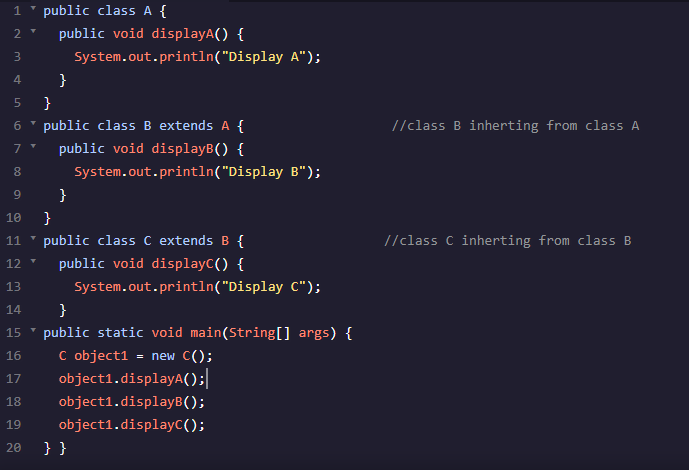 Class A is extended by simply class B. Then class B is by itself extended by class C, which provides class C with direct access to the method displayA() and displayB() of class A and as well B by simply getting at these an object of class C (without having to generate objects of class A and B).

When a couple of classes inherit the same class, this is known as hierarchical inheritance. For example, classes B and C extend the same class A. 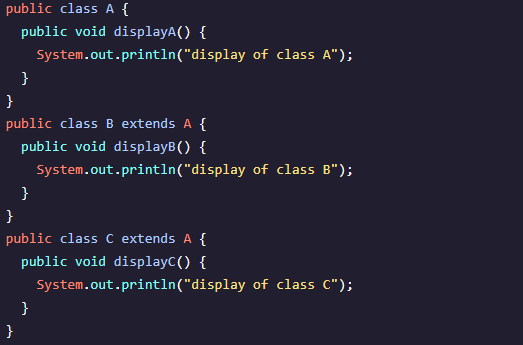 The syntax for Multiple Inheritance

Note: Multiple Inheritance is not supported in java.

However, multiple inheritances in Java may be accomplished by using interfaces. Regardless of the many quantities of interfaces in a class with an exact method, there is no indication of ambiguity since methods within an interface are often abstract.

The other way is to use interfaces. Interfaces will start becoming important.

An interface specifies the form of its methods but does not give any implementation details; therefore, you can think of it much like the declaration of a class.

We can use these two interfaces with the implements keyword: 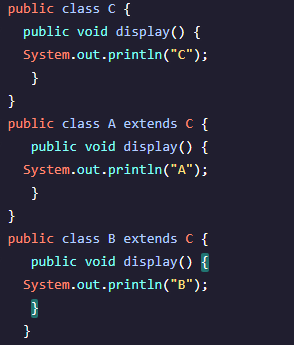 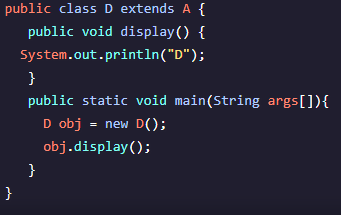 You can prevent the class from being a subclass by declaring the entire class final below.

If you try to execute this code:

To prevent method overriding and to prevent subclassing. There is another use for final in Java; you can use it to declare constants.

As per the below code:

If you try to execute this code:

Can’t assign a value to a final variable: a 1 error generated

The top java inheritance companies include:

One of the main features of inheritance is used to decrease the amount of duplicate code in an application form by sharing ordinary code between many subclasses. Where equal code can be obtained in two related classes, the hierarchy can usually be refactored to transfer the ordinary code to a mutual superclass. This will result in a superior organization of code and smaller, easier compilation units.

Why should we use it?

Inheritance is a practical programming concept, but it may be simple to use inappropriately. Usually, interfaces are effective and more efficient.

Inheritance is the best choice when:

It is an OOP (object-oriented programming) concept. The primary purpose of inheritance is to create a new part of your project’s code reusable, possibly adding or eliminating features. A child class could inherit or override methods chosen from the parent class; it is the methods from without exchanging the parent class. This can include its own new methods, which is usually not found in the child class.

Who is the right audience for learning Java Inheritance technologies?

When thinking about what should be done with it, several developers think of building:

Android is the most effective mobile operating system in today’s competitive market, with more than 1.5 million new devices activated daily. Android training offers you hands-on experience in creating and constructing easy to complex Android apps, ensuring you are proficient in acquiring your dream IT job. You could have an excellent history in programming, but Android training will benefit you and enhance your abilities.

Android is growing, so when you learn the fundamental principles as well as features, your skill set will grow correct in addition to it. Developers can make games and apps for Android users and spread them through an open world. Android training is amongst the most intelligent facts a developer can accomplish, so it has many benefits.

You can hear much about the Internet of Things (IoT). The IoT is all around, from sensors in enormous industrial machinery to smart-house devices like digital security cameras. Did you know the popular Nest thermostat will depend on a remarkable combination of Java and AI? A few smart vending machines are Java-dependent, working with software to track inventory, temperature, humidity, and region. Furthermore, several wearable technology applications are designed in Java Inheritance.

Nowadays, big data analysis is at the core of one of the most exciting uses of technology. Research studies in several key industries are applying innovative data analysis techniques to learn new patterns in large volumes of data also to figure out complex processes better.

Java is among the most prominent and essentially used programming languages on the globe of Information Technology. Furthermore, Java is a fundamental programming language that a fresher can quickly learn. As per the report by Oracle, Java runs on over 3 Billion devices..!

Java is an evergreen programming language. Almost all known companies, including IBM, Infosys, CTS, and TCS, apply Java as their ideal Programming Language.

Conclusion – What is Java Inheritance

It is a powerful weapon of Java that can help to succeed in the most suitable language. It can minimize code duplication and reduce bugs. With the code set in the parent class, you can no longer prefer to write similar code for many child classes with the characteristics. Inheritance in Java executes code reusability.

This is a guide to What is Java Inheritance?  Here we have discussed the basic concept, use, need, career growth, and advantages of Java Inheritance. You can also go through our other suggested articles to learn more –