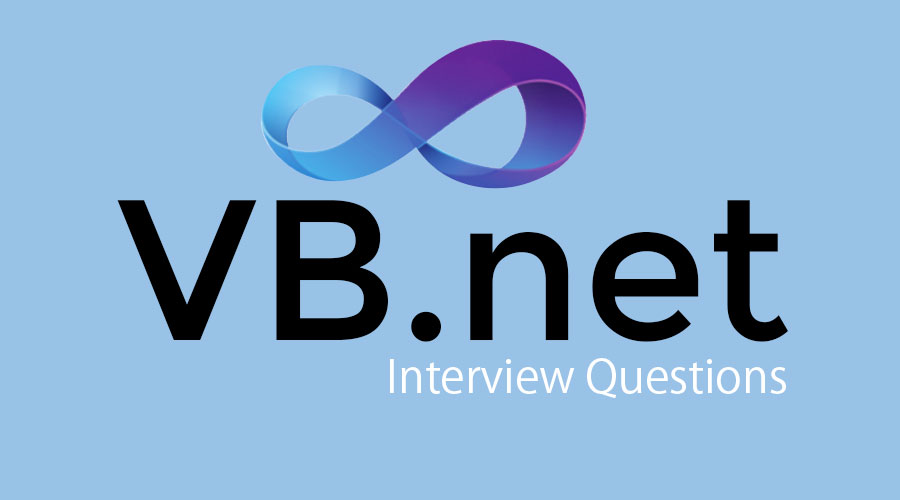 Visual Basic (VB.NET) is an object-oriented computer programming language implemented on the .NET Framework. VB.NET is used to develop Windows applications, Web applications, Web services.  It is an evolution of classic Visual Basic language, it is not backward-compatible with VB6, and any code written in the old version does not compile under VB.NET. VB.NET has complete support for object-oriented concepts. It is also possible to run VB.NET programs on Mono, the open-source alternative to .NET, not only under Windows but even Linux or Mac OSX.

Components and Advantages of VB.Net

Following are some of the components and advantages of a the.Net framework:

Below is the list of  Top VB.NET Interview Questions that are asked in an interview. These top questions are divided into two parts which are as follows:

2. Explain Metadata, namespace, which namespace is used for accessing the data, What is JIT?

Answer:
Metadata is termed as “Data about the content of the data” and it is found in the catalog of libraries. Practically, it is used to analyzed data of database can be used for some other purpose also.
A namespace is an organized way of representing Class, Structures, and interfaces present in the .NET language. Namespaces are a hierarchically structured index of a class library, available to all .NET Languages.

It stands for Just in Time compiler which is used as a part of the runtime execution environment. There are three types of JIT and they are:

Let us move to the next VB.NET Interview Questions.

3. What is an assembly, its type, its use and what is a strong name in .NET assembly?

There are two types of assembly:-

Strong Name is an important feature of.Net and it is used to identify shared assembly uniquely.
Strong Name has solved the problem of creating a different object with the same name and it can be assigned with the help of Sn.exe. This is the most common VB.NET Interview Questions which is asked in an interview.

Answer:
.Net generally allows implicit conversion of any data types. In order to avoid data loss during data type conversion,
option strict keyword is used and it ensures compile-time notification of these types of conversions.

Option Explicit is the keyword used in a file to explicitly declare all variables using declare keywords like Public, Dim, Private, or Protected.
If an undeclared variable name persists, an error occurs at compile time.

INTERNAL keyword is one of the access specifiers which will be visible in a given assembly
In a DLL file. This forms a single binary component and it is visible throughout the assembly.

Answer:
The jagged array is an array of arrays. Each entry in the array is another array that can hold any number of items. This is the frequently asked VB.NET Interview Questions in an interview.

7. What is Garbage Collection in VB.net?

Answer:
System.string class is non-updatable and it will create a new string object instead of updating the same.
But updating in the same string object is possible for the StringBuilder class. So, the operation of a string builder is faster and efficient than the string class.

Let us move to the next VB.NET Interview Questions.

9. Difference between int and int32?

Answer:
Int32 represents 32-bit signed integer whereas it is not a keyword used in VB.Net.

Answer:
Hashtable is set to be items with key and value pairs. Keys are referred to as indexes and a quick search can be performed for values by searching through the keys.

This has been a guide to List Of VB.NET Interview Questions. Here we have discussed top 10 VB.NET interview questions with detailed answers that are most often asked in interviews. You may also look at the following SEO articles to learn more –