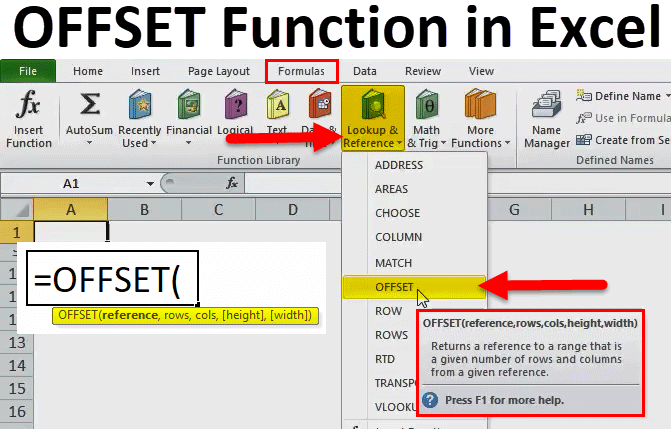 Introduction to OFFSET in Excel

Below is the OFFSET Formula in Excel:

OFFSET Function in Excel consist of the following arguments:

How to Use the OFFSET Function in Excel?

The Offset formula returns a cell reference based on a starting point, rows and columns which we specify. We can see it in given below example:

The formula tells Excel to consider cell A1 for starting point (reference), then move 3 rows down (rows) and 1 column to the left (columns argument). After this, the OFFSET formula returns the value in cell B4.

The pic on the left shows that the route of function and the screenshot on the right demonstrates how we can use the OFFSET formula on a real-time basis data. The difference between the two formulas is that the second (on the right) includes a cell reference (D1) in the row’s argument. But since cell D1 contains number 1, and exactly the same number appears in the rows argument of the first formula, both would return an identical result – the value in B2.

As we know that the OFFSET Function can also be used with the other function of Excel, hence in this example we will see with the SUM Function. 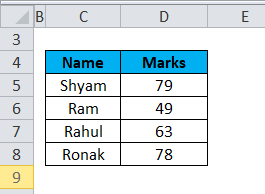 In the above pic, suppose we have to find out the sum of marks then we can also use the OFFSET function.

The formula is below: 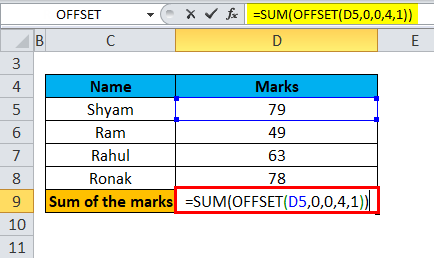 So, in above formula D5 is the first cell where the data begins which is a reference as starting cell. After that the rows and column value is 0, so we can put it as 0,0. Then there is 4 which means 4 rows below the reference for which Excel needs to calculate the sum and then, at last, it is 1, it means there is 1 column as width.

We can refer the above pic to co-relate the explained example.

And below is the result: 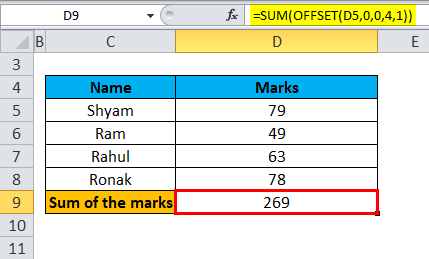 Just we have to press Enter after entering a formula in the required cell and then we have the result.

The Offset formula returns the sum of values in a 1-row by a 3-column range that is 3 rows below and 1 column to the right of cell A1, i.e. the total of values in cells B4:D4.

As we can see the total of 36+63+82 of highlighted Mar is equals to 181, which came as a result in G2 after applying sum and Offset formula. (highlighted in yellow)

Use of OFFSET Function in Excel

As we have seen that what the OFFSET function actually does with the help of above example, we may have questions that Why to bother sung OFFSET formula that is a bit complex, why not simply use a direct reference like sum or B4:D4?

The OFFSET Function in Excel is very good for below:

Sometimes, we do not know the exact or actual address of the range, we only know from where it starts from a certain cell. In this case, we can use the OFFSET Function, which is easy to go.

The references like the above example B1:C4 are static, it means they always refer to a given or fixed range. But in some case, the tasks are easier to perform with dynamic ranges. It especially helps when we work with changing data. For example, we could have a spreadsheet where new row or column is inserted or added every day/week/month, in this case, the OFFSET function will help.

Limitations and Alternatives of the OFFSET Function in Excel

As each and every formula in Excel has its own limitations and alternatives, we have seen how and when to use the OFFSET Function in Excel.

Below are the critical limitations of the OFFSET function in Excel:

It means that whenever there is a change in the source data, the formula will be recalculated for the entire set, which keeps Excel busy for a longer time. If there is a small spreadsheet then it will not affect that much but if there are a number of spreadsheets then Excel may take time to recalculate.

As we know the references returned by Offset function are dynamic or changing and may contain a big formula, which may find tricky to correct or edit as per requirement.

Alternatives of the OFFSET Function in Excel:

The INDEX function in Excel may also be used to create a dynamic range of references. It is not exactly the same as OFFSET. But like OFFSET, the INDEX function is not that much volatile, hence it won’t slow down the Excel which is a limitation for OFFSET.

We can also use the INDIRECT function to create a dynamic range of references from many sources like cell values, text and the named ranges.

This has been a guide to OFFSET in Excel. Here we discuss the OFFSET Formula in Excel and How to use the OFFSET Function in Excel along with practical examples and downloadable excel template. You can also go through our other suggested articles –