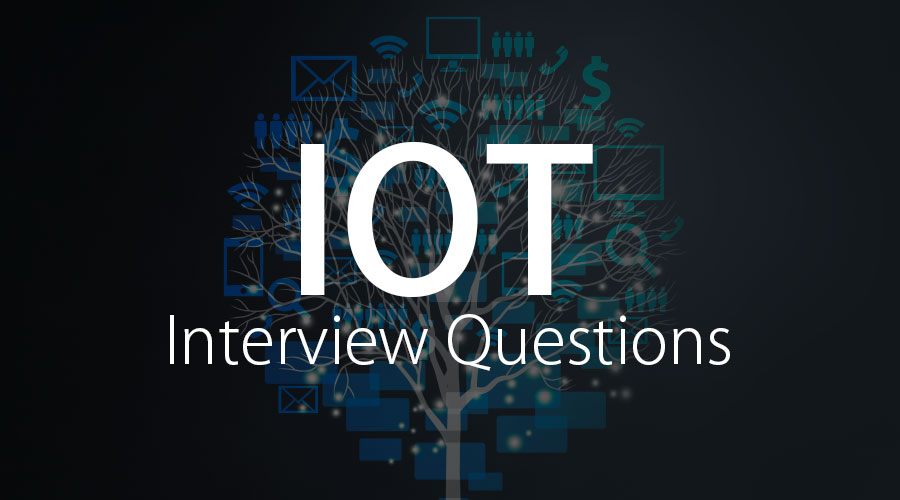 IoT (Internet of Things) is an advanced automation and analytics systems which exploits networking, big data, sensing, and Artificial intelligence technology to give a complete system for a product or service. IoT systems allow users to achieve deeper automation, integration, and analysis within a system. It exploits recent advances in software, falling hardware prices and modern attitudes toward technology.

Allows IOT devices to remotely control over the Internet, thus it creates opportunities to connect directly and integrate the physical world to the computer-based systems using internet and sensors.

The major benefits for IoT are:

Q1. What are the main parts of IoT systems?

Q2. What are security concerns related to IoT?

Answer:
This is the common IoT Interview Questions asked in an interview. Data security and privacy are major concerns related to IoT. These devices are vulnerable to hacking and cloud endpoints could be used by hackers to attack servers. Software developers and device designers have to ensure adequate security and privacy measures.

Q4. Explain the basic architecture of the IoT network.

The IoT hardware system can be constructed using Micro-Controller Units. Choice of Micro-controller depends on the system on chip resources, the power required and interfaces needed as per different sensors and memory requirements.

To finalize the IoT hardware architecture following aspects are required to study:

Nokia originally introduced this protocol as wibree in 2006. Additionally, known as Bluetooth smart this protocol presents the same range coverage with a good deal of decreased strength intake because of the unique Bluetooth. It has comparable bandwidth with narrow spacing utilized by ZigBee. Low electricity latency and decrease complexity makeable greater appropriate to include into low-cost microcontrollers.

Let us now have a look at the advanced Interview Questions and Answers.

Q6. What is the top 5 Machine to Machine (M2M) applications in the world?

Answer:
They are as follows:

Q7. How might Internet Address (IPv6) affect the development and implementation of the Internet of Things?

Answer:
This is the most popular IoT Interview Questions asked in an interview. A barrier to the improvement of IoT is the technical boundaries of the version of the network protocol(IP) that is used most widely. IP is the set of rules that computers use to ship and receive statistics via the internet, including a specific address that every connected device or item should have to speak. Model four (ipv4) is presently in widest use. It can accommodate about four billion addresses and its miles near saturation, with few new addresses available in many parts of the sector.

Version 6 (ipv6) allows for a big increase within the wide variety IP addresses. With ipv4, the maximum number of particular addresses, 4.2 billion, is not sufficient to provide even one deal with for every of the 7.3 billion human beings on earth. Ipv6, in an evaluation, will accommodate over 1038 addresses extra than a thousand billion trillion per man or woman.

Q8. What is the difference between a wireless sensor network (WSN) and the Internet of Things(IoT) network?

Answer:
WSN: Wi-Fi sensor community is the foundation of IoT packages. WSN is a network of motes, fashioned to look at, to take a look at or to monitor bodily parameters of desired utility.

IoT: IoT is a community of bodily objects managed and monitored over the internet. Now just as win, in its application, you will stumble upon the monitoring of physical parameters. But preferred results are little different. IoT is about M2M, it’s far greater than bringing smartness into daily gadgets.

e.g. device hooked in your thermostat monitors surrounding temperature and adjust it to maximum favored placing for.

Q9. What is meant by a smart city regarding the Internet of Things?

Answer:
As with IoT and different popular era terms, there is no established consensus definition or set of standards for characterizing what a smart metropolis is. Precise characterizations vary widely, however in fashionable they involve the use of IoT and related technologies to improve energy, transportation, governance, and other municipal offerings for certain desires which includes sustainability or advanced great of lifestyles.

Q10. What is Bluegiga APX4 protocol for an Internet of Things?

Answer:
Bluegiga and wireless together may be used without interference as they are compliable to coexistence protocols. The bluegiga apx4 supports both Bluetooth and Wi-Fi and is based on a 450mhz arm9 processor.