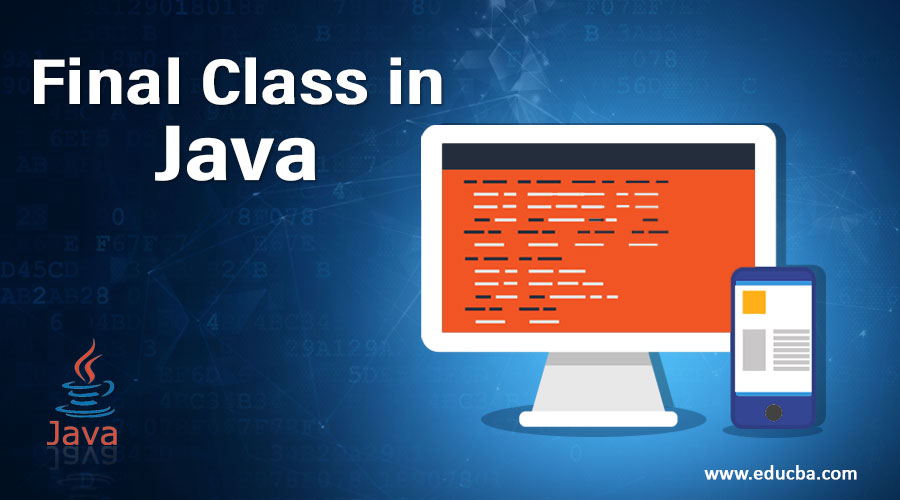 Introduction to Final Class in Java

Sometimes It is best practice to use the final class for security purposes, As some classes perform security-related things like authentication, authorization. In such a scenario, strings, methods inside of the class should not be modified in the whole life cycle of the application than making class as final is a better practice.

Making class Final improves the efficiency of the application.

The above-given class with the final word is a final class. If we are going to extend this final class with another then it will produce errors such as “error: cannot inherit from final Student” as given in the below screenshot.

How does Final Class work in Java?

When declaring a class with the final keyword, It enables JVM to make assumptions & optimization. As final is the reserved keyword of java and once added to any class it means reference for that class is not allowed to be changed. The compiler will check if any referencing is taking place again then it will produce an error.

If a class is declared as final then all methods of that class implicitly get declared as final. Final is a modifier in java, final can be applied to a variable, method or classes. Once the modifier was added to the class all variables & methods of that class would be immutable implicitly. Making class immutable provides several benefits such as It is read-only & can not be safely shared in the multiple threads without any synchronization.

Examples of Final Class in Java

Given are the following examples of Final class in java:

In the below-given program, we can see inheritance is not allowed for the HeavyVehicle class because it is a final class

Now we will move to the next class where we create an instance of the final class to use its method. Output for the given program after skipping the inheritance process is given below

In this program, the HeavyVehicle class is declared as a final class so it can not be extended in the other class so explicitly passing its reference to the Vehicle class method.

In this example, the final class inherits the other class i.e. Student but no other classes can extend the Info class because it is a final class.

This is a guide to Final Class in Java. Here we discuss how does Final Class work in Java? along with the respective examples. You can also go through our other related articles to learn more–