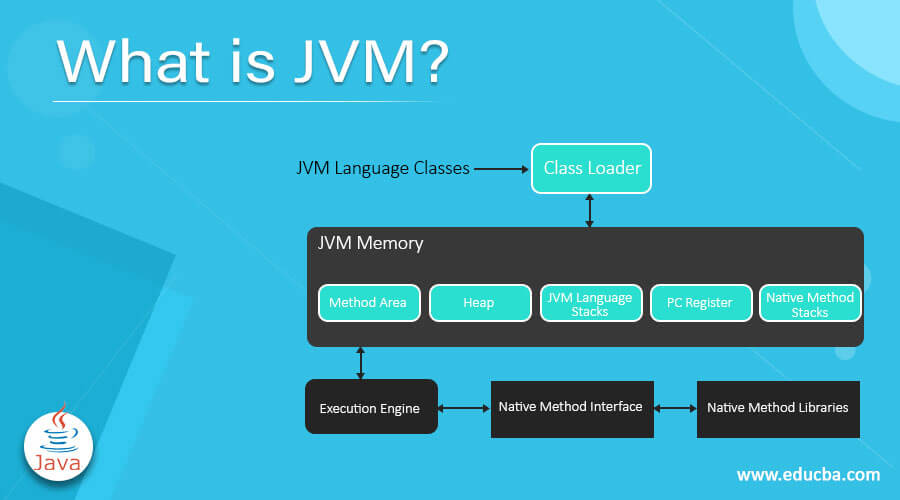 Java Virtual Machine (JVM) is a powerful engine that offers a Java Software or application runtime environment. Java bytecode is converted into the language of your machine. JVM’s a Java Run Environmental (JRE) portion. The compiler produces machine code for a particular system in other programming languages. Bytecode is an intermediate language between the host and the Java source.

Java is known as platform-independent due to the Java Virtual Machine. When a submission is done into different computers with the different operating systems having JVM, the bytecode is interpreted into machine-level language by JVM. To be precise, JVM programs are written in C Programming Language, while JVM is independent of the operating system. It is a key component of Java Architecture.

What does it do?

The crucial operations which JVM performs are as follows:

Let’s get some key insights about the internal architecture of JVM which comprises of:

It is a subsystem of JVM used to load class files. While running the java program it first gets loaded by the classloader. The three classloaders which Java includes are as follows:

a. Bootstrap ClassLoader: It’s the superclass of Extension classloader. It assists in loading the rt.jar files that carry all the class files.

C. System/Application ClassLoader: It is the child of the Extension classloader also known as Application classloader. The class files from the classpath can be extracted through it. The Classpath, which is set to the current directory, by default can be changed by using ‘-cp’ or ‘-classpath’ switch.

The pre-class structures like field and method data, runtime constant pool, and the code for methods are stored in the

Class (Method) Area. It is a memory that is created on JVM startup and is shared among all Threads like Heap.

The objects are assigned through this useful runtime data area. It is a memory place storing objects along with its instance variables. Whenever an object is created in Java, it goes into the heap – the area of memory.

Along with storing frames, Java Stack holds variables and partial results. It also plays a pivotal role in method, invocation, and return. Every individual thread consists of its private JVM stack, created at the same time as thread. Whenever a method escalates, a new frame is generated and is shattered when the method invocation gets completed.

The PC register contains the JVM instruction address at the time of its execution. Keeping track of instructions, it has value for every instruction which is undefined for the native methods.

The native procedures used in the applications are part of the Native Method Stack. These methods are written in languages other than Java. Associated with each thread, JVM implementations can’t rely on conventional stacks and cannot load native methods. To be precise, it is similar to stack but used for native methods.

Being the key aspect of JVM, it communicates with its various memory areas. This includes:

a. Garbage Collector: This plays a vital role in the JVM’s dynamic memory management system. The memory which is occupied and no longer referenced by any of the reachable Java objects is released through the Garbage Collector.

b. Interpreter: It executes the instructions after reading the bytecode stream.

c. Just-In-Time (JIT) compiler: Enabling performance enhancement, JIT compiler compiles parts of the bytecode with similar functionality at the same time. It helps in reducing the amount of time needed for the compilation process.

The applications scripted in other languages i.e. C, C++, Assembly, etc. can be connected to, through an interface delivered by JNI. JNI framework is used by Java to interact with OS libraries or to send output to the Console.

What is the use of JVM?

The JVM has two primary functions: to allow Java programs to run on any device or operating system (known as the “Write once, run anywhere” principle), and to manage and optimize program memory.

Java Programs are aptly executed through JVM. Bytecode – an intermediate language is used to compile Java programs and then executed through JVM. Every individual program which is being compiled into bytecode can be performed by any platform fueled by JVM. This enables Java software more effective as well as compatible as per the various computing platforms are concerned. The JVM has a few notable advantages and disadvantages that any developer should weigh carefully before investing in Java development.

Through JVM’s security knacks, the programmers can effectively write high-end secured Java programs. It empowers the Operating System resources to identify the malicious software and also helps in its prevention accordingly.

Java programs which run on a JVM are likely to offer slower execution as compared to the programs that are written in C++. This is due to the code optimization which excessively relies on different system-specific features. Also, the Java bytecode cannot be optimized for a specific hardware set, as it is system-neutral.

Correct is the program, which performs effectively and meets a user’s expectation to the fullest. JVM’s in-built features enable it to operate correctly and free of errors.

Why should we use JVM?

In spite of having Java syntactical code, JVM can run on various different language programs. Few of the reasons why it is so widely used and why to use it across different platforms are listed below:

It uses heap memory: Heap memory is a core component that is used for dynamic memory allocation for defining classes and object initialization and since JVM supports heap memory, it has wide acceptance.

Providing security for Remote code location: JVM framework is designed in such a manner that remote application is easily executed. This theory is followed for executing the Java Applet.

The fact that JVM works on multiple operating systems, gives it a thumbs-up in the technology domain. Using it on Windows, Linux, and other OS’s, it is enabled to transform bytecode regardless of the hardware and the OS that is to be executed. In addition, its ability to offer security to the host computer by securing their data and program is another reason why JVM has been so successful in the past and continues to be dominant in the future.

This has been a guide to What is a JVM(Java Virtual Machine). Here we discuss the basic concepts with the list of Architecture and uses of JVM. You can also go through our other suggested articles to learn more –