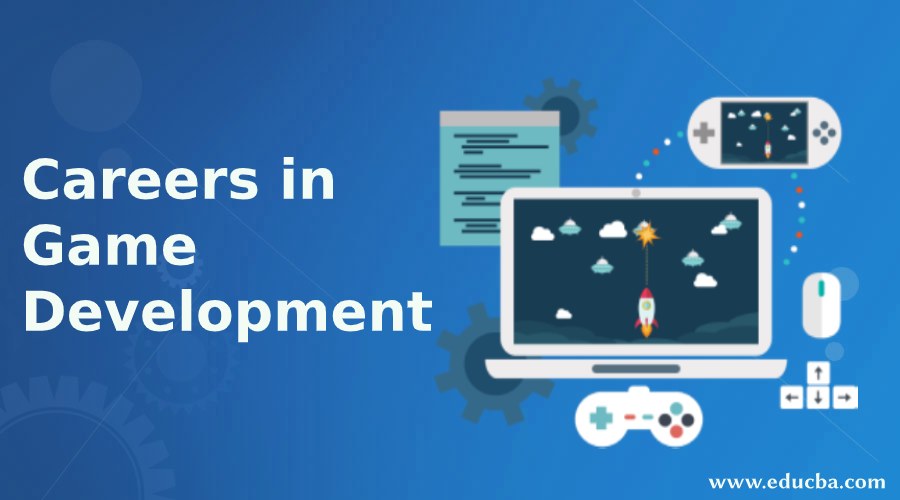 Introduction to Careers in Game Development

In this Topic, we are going to learn about Careers in Game Development. There would not be a child that has not played any games in the history of man. But were you one of those who invented a new game every day to play with your friends? If you did invent games, were you popular? You may just have a basic understanding of game design, which combined with formal training, would make you a game designer, a professional who designs games.

On the other hand, if you were good at making your friend’s game work, you can be in-game development; Just kidding. It is made up of a lot of different things, and today, we will tell you about them.

Broadly speaking, a game is made of these things – a premise or story, gameplay mechanics, and visual or sensory aids. For a video game, this translates to the game’s engine and code and artwork, including visual and sounds, and its story or goal.

Video game development was pioneered by computer science graduates, the first one being Pong, a tennis-like game invented at the AT&T Labs. However, it is not necessary to have a degree in computer science. If you are a competent programmer, you can apply for programming positions, without any reservation. The industry is more oriented in looking at your capabilities than paper credentials.

Yet, if you are targeting a particular line of work in the video game industry, and are not an extraordinary talent, you would be well advised to go for formal training based on the line of work you prefer, and trust me when I say; there is something for everyone in this industry.

Leaving the lawyers, accountants, and salespeople, specific talent needed in the video game industry includes professionals in 2D and 3D graphics, animation, sound engineering, game programming, as well as musicians, actors, martial arts choreographers, voice artists, production managers and so on. Each of these disciplines has its own learning path, and you have to choose appropriately according to your need.

You can start as an independent game developer, or as part of a video game studio. The independent path is just like starting out on your own in any other business – full of difficulties and requiring exceptional perseverance, more than even talent.

Try it only if you have a really good financial backup for at least a year or two so that you can get at least one full game released, depending on your game’s scale and complexity, and the parts you can build with your capabilities. For the things you cannot cover, you will need help from other people, and you do have choices for taking this help in different ways. You can use pre-existing game engines to cut the cost and time on developing your own. You can also look for pre-built code and artwork from various marketplaces and platforms like GitHub. While developing your game, you also have to promote it, building an audience before it is released. Most indie developers do this on their own, a few have enough funds to cover the expenses for a marketing team or representative. If you score a hit with your first game, you may have a shot at a career as an indie developer.

The easier and more sustainable path is to look for a job at a studio. It allows you to work in one specialization and have prospects that are not tied to anything except your quality of work.

In the technical teams, you will either begin as a junior programmer or a junior artist and can rise to lead a team or project over the course of time, depending on the quality of your work and available vacancies or opportunities.

Some positions are above this hierarchy, but those are for decision-makers and usually not accessed through the above route. These include directors, producers, game designers, and the studio’s board of directors, at the top of the chain.

Starting salaries vary by line of work and location, and the conditions in the local industry, but on average, video game programmers make more than artists.

For India, as indicated by a search result on Glassdoor.com, salaries for game programmers were between Rs 3-4 lakh for small to medium scale companies, and around Rs 5-6 lakh per annum for major studios.

The video game industry has grown in multiples in the last twenty years, and as technology makes further advances, more and more platforms are gaining ground. At the beginning of the 21st century, PC and console games were the only show in town. Handheld consoles and mobile games were a very small part of the industry. These two segments have gained a very significant audience over the years, as the technology behind the platforms has progressed. Today, the whole industry is valued at over US $100 Billion and is poised for robust growth. Augmented and virtual reality is also being developed as new, more engaging platforms, and when ready with the right hardware platforms, will give birth to a whole new subset of the industry.

This means that there are growing opportunities for artists and professionals who want to pursue careers in the game development industry, and the subsets of specializations will grow along with new platforms.

The video game industry is a hard place to begin a career, but very rewarding to people who are determined, hardworking and talented, whether they are in technical or non-technical lines.

Considering the growth prospects of the industry, it can be said without a doubt that it is a good place to look for a job if you want specialized professional careers in Game Development, and are focused, hardworking and talented at what you want to pursue in the industry.

This has been a guide to Careers in Game Development. Here we have discussed the Introduction, Education, Career Path, Job Positions, Salary, Career Outlook. You may also look at the following articles to learn more –