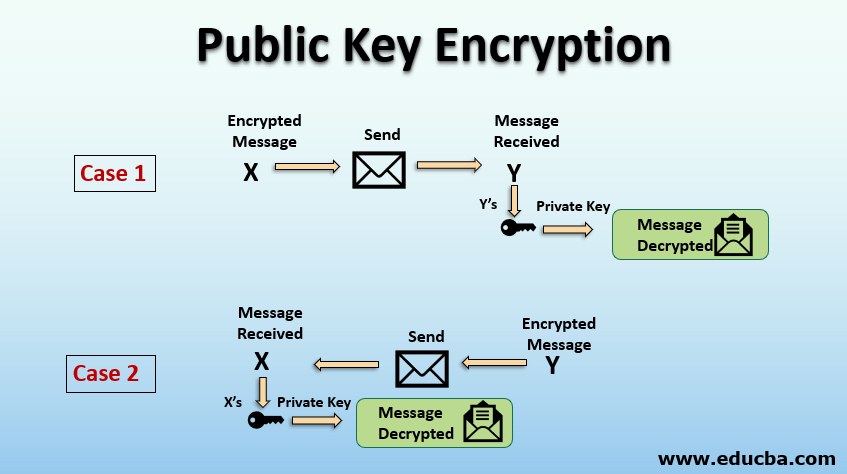 Let’s assume that you want to communicate with friends over the internet, to start the communication securely; you need to obtain both public and private key. The private key is a secret key; you should keep it as a secret. If the private key is disposed to another party, there is a chance of attack through the third party.

If X wants to communicate with Y securely, both X and Y should have a public key and private key.

How does Public Key Encryption Work?

Working of Public Key Encryption is explained below:

When X wants to communicate with Y, X uses Y’s public key to encrypt the message; this is possible because Y shares her public key to X.

When Y wants to communicate with X, Y uses X’s public key to encrypt the message. This is possible because X shares her public key with Y.

Following are the components of the public key encryption:

The following are the Algorithms of public-key encryption.

RSA is the most popular public-key encryption algorithm. RSA algorithm is based on mathematical computation were identifying and multiplying a large prime number is easy but difficult to factor their factor. The private and public keys used in the RSA are large prime numbers.

Note: In the RSA algorithm, selecting and generating a public key and the private key is a critical task.

This is a guide to Public Key Encryption. Here we discuss public-key encryption, its components, and how does it work, along with examples. You may also look at the following articles to learn more –