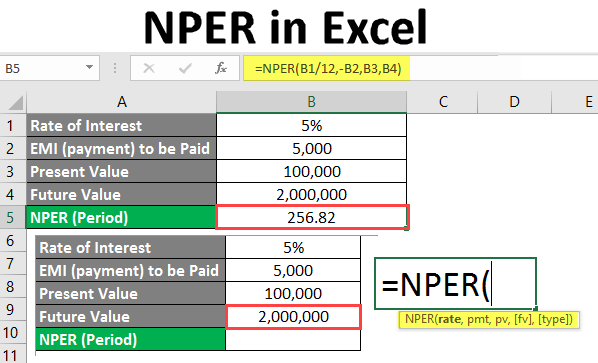 Introduction to NPER in Excel

NPER function in Excel is used for finding out how many numbers of payments a customer needs to make for the borrowed loan or invested amount. And those numbers of payments (NPER) will be based on a fixed amount to be paid on the current rate of interest. This also has the option of whether payment will be made at the start of the month or end of the month.

An argument in NPER Formula

How to Use Excel NPER in Excel?

Mr Akshay has taken a loan of 1,50,000 for higher studies. He agreed to pay the amount with a rate of interest of 10.28% per annum and is able to make a payment of 10,000 per month. However, he is not so sure when he can clear the loan amount. We will help him out to find this out with the help of the NPER function in Microsoft Excel.

In cell B1, but the value of the Loan Amount.

In cell B3, the value of Monthly EMI that Mr. Akshay can pay on behalf of his Loan Amount.

We need to find out the period under which Mr. Akshay can pay this amount with a monthly EMI of 10,000 and a rate of interest of 10.28% per annum. This value we need to calculate in cell B4.

In cell B4, start typing the formula of NPER.

Mention B2/12 as the first argument for the NPER formula. As a given Rate of Interest is per year, we need to break it down to the interest rate per month because we are paying the amount per month.

Now, the next argument is the amount to be paid at each period; since Mr. Akshay is ready to pay the EMI amount of 10,000 per month (Cell B3), you will mention it as the next argument in the formula. However, please note that this amount is a cash outflow (amount which is going to be deducted from Mr Akshay’s account). Therefore, you need to mention it as a negative amount.

Please note that in this formula, we have not included fv (future value of the loan) and type (whether the EMI is being paid at the start of the month or at the end of the month) as these are the optional arguments.

In cell B1 of the Excel sheet, input the Annual Rate of Interest.

In cell B2, mention the payment amount Mr. Sandeep is ready to pay every month.

In cell B3, add the present value of the investment which Mr. Sandeep is about to make.

In cell B4, the future value will take place. The value which Mr. Sandeep wants is a lumpsum amount at the time of his retirement.

In cell B5, start typing the NPER Formula. 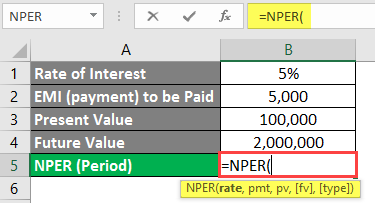 Put B1/12 as a first argument under NPER Formula. As the given rate of interest is per annum, you need to divide it by 12 in order to get a monthly rate of interest (because Mr. Sandeep is paying installments monthly). 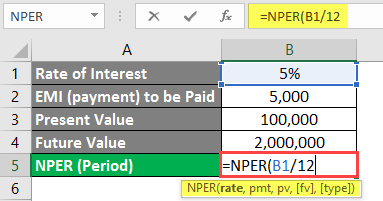 Mention -B2 as the next argument in this formula. As the value 5,000 is going to be debited from Mr. Sandeep’s account (outgoing amount), we need to mention the negative sign for the same.

The next argument would be the Present Value of the Investment, which is in cell B3.

Lastly, mention B4 as an argument that represents the Future Value of Investment.

Press the Enter key, and you will get the value of the number of months; Mr. Sandeep has to make an investment in order to get 20,00,000 as a final amount when he retires.

Things to Remember About NPER in Excel

This is a guide to NPER in Excel. Here we discuss how to use NPER in Excel along with practical examples and a downloadable excel template. You can also go through our other suggested articles –