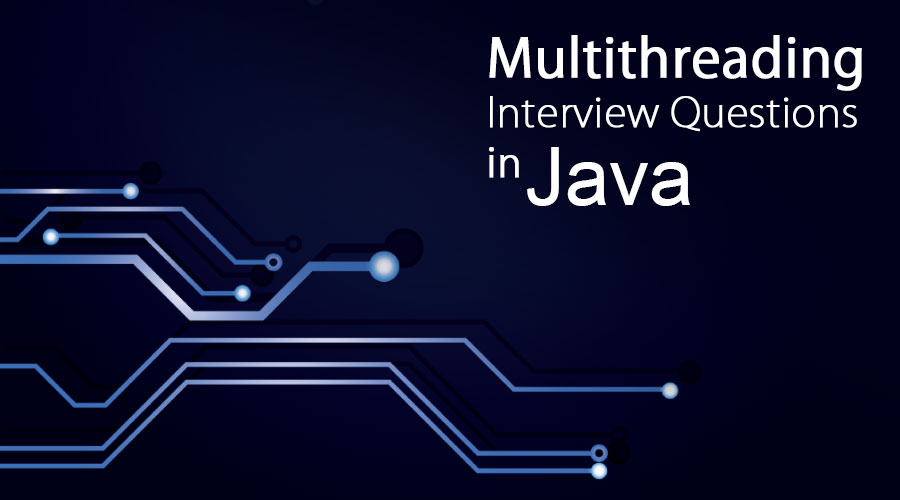 Introduction to Multithreading Interview Questions and Answers in Java

Answer:
The states of the thread are also referred to as Lifecycle of a Thread. The below are the different states of Thread:

Q2. What is the thread in java?

Answer:
The thread refers to a small unit which takes less time to get it executed. It mainly independent of the path of execution. It is one of the ways to take advantage of multiple CPU available in the machine. With help of multiple threads, the process of CPU task becomes faster. Java is being majorly used for providing the support to multithreading.

Let us move to the next multithreading Interview Questions in Java.

Q3. Explain the difference between thread and process in JAVA?

Answer:
The thread is the smallest task of execution within the process. The process is a self-contained execution environment having more than one thread or multiple threads. Threads are the subdivision of process. The thread is having direct access to the data segment of the process whereas the process is having own copy of the data segment. Thread mainly shared the address which is created by the process and process is having their own address. The thread can be easily created and process creation needs a lot of things to do. The thread can easily communicate with other threads whereas process can easily communicate to child process but interprocess communication is difficult. The thread is having its own stack whereas process shares the memory resources like heap memory etc. In the thread, if any change has been done it will affect all the threads but in the process, it does not affect other processes.

Answer:
This is the common multithreading Interview Questions in Java asked in an interview. Several responsibilities normally need to follow by a multithreading tester in current IT industry.

Java Memory model is having a certain set of rules to follow for Java programs to behave in a certain manner across all multiple memory architecture, CPU and operating system which plays an important role in multithreading. Java memory model helps in to distinguish the changes done in one of the thread and that change should be visible to other threads also. In this model, there is a program order rule, which says that each action in thread happens before every action in the thread that comes later in program order.

Q5. Explain the use of Volatile variable in Java Multithreading?

Answer:
Volatile keyword or variable is used to ensure that shared or instance variables are constantly updated whenever changes made by multiple threads. It is a special modifier that can be used with instance variables only. This keyword cannot be used with methods. If the field in java is declared as volatile, then Java memory model ensures that all threads should have consistent value for that variable. The value of the volatile variable will always read from the main memory. It also reduces the risk of memory consistency errors. Java volatile variable that is an object reference can be null. The volatile keyword needs to be used if the variable is being used across multiple threads.

Let us now have a look at the advanced multithreading Interview Questions and Answers in Java.

Answer:
The race condition occurred when there is a race between multiple threads. This race condition is mainly caused due to some programming bugs or errors. The thread which needs to be executed at very first lost the race and then executed the second and some change in the behavior of code that referred as non-deterministic bugs. It becomes one of the difficult bugs to find out and reproduce because of the random nature of threads.

Answer:
The fork-join framework is introduced in JDK7. It is a powerful tool for Java developer to take advantage of multiple processors of today’s world servers. It is being mainly designed for work that can be divided into smaller pieces. The main goal is to use the available processing power to raise the application performance. It mainly used the work-stealing algorithm.

Let us move to the next multithreading Interview Questions in Java.

Q8. Explain thread pool and its use in Java?

Q9. How the data can be shared between the thread?

Answer:
This is the most popular multithreading Interview Questions in Java asked in an interview. Some popular test cases in the current IT industry.

The data can be shared between threads with help of using the shared object or concurrent data structure like Blocking queue. It mainly follows the producer-consumer pattern using wait and notifies methods that involve sharing object between the two threads.

Q10. How threads distributed in stack and heap memory?

Answer:
In Java, each thread has its own stack which is used to store local variables, method parameter, and call stack. Heap memory is common memory which is being shared by all the threads.