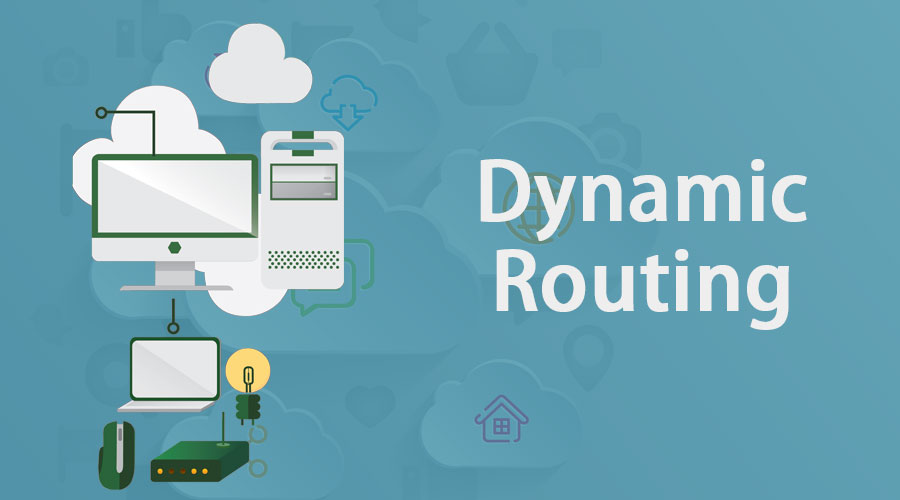 What is Dynamic Routing?

Dynamic Routing is a network routing procedure, which facilitates the routers to pick and choose the routing paths depending on the logical changes happening in the network structure in the real-time. This is opposite to the typical traditional static network routing. This is an automated routing technique that requires very less administration and supervision. Various protocols used in this routing method are Open Shortest Path First (OSPF), Routing Information Protocol (RIP), Border Gateway Protocol (BGP), and Enhanced Interior Gateway Routing Protocol (EIGRP).

What Can You Do With Dynamic Routing?

Dynamic routing protocol working is explained as under :

Dynamic routing is considered easy to configure on large networks and also it is more intuitive than static routing at a selection of the best route, detection of the route changes and also a discovery of the remote networks.

But, since the routers always share updates, they always consume bandwidth more than it consumes in static routing. The routers CPUs, as well as RAM, also face loads which are added as a result of protocols of routing. At last, dynamic routing is considered to be less secure than static routing.

There exist many interior gateway routing protocols, that is, IGP. These are the protocols that could be used within the network. These protocols are supported by every router and operating system of the server like Windows 2003 Server or Linux too. Some of the protocols are explained as under :

It is a very famous dynamic routing protocol that is being used in today’s world. OSPF is also an open protocol to ensure that any router or even server operating system is able to run this protocol. It selects the best route by making use of cost as its metric. It is also considered as a complete-featured routing protocol and also it can be complex, however, it can also scale to any size in the network.

It is considered as a proprietary protocol for Cisco. Just for your information, just the Cisco devices make use of EIGRP. It is a completed-featured protocol just like OSPF. It has got some amazing features, but until you make sure that you are going to have a Cisco network, the use of open protocol (OSPF) is recommended. EIGRP has replaced IGRP which was its predecessor. The metric that is needed to select the best route through EIGRP is calculated by the use of a formula that takes into account bandwidth, reliability, delay of the link and also load.

RIP is considered a protocol that is an open-source. Version 2 of it is the latest one that you should be using today since it provides VLSM, that is, Variable Length Subnet Mask support. It is simplest as well as the easiest protocol of routing to configure, although it also has got lesser features as compared to OSPF. It is restricted to routing for the network having less than 15 hops. This protocol works quite well for a small network that doesn’t think of expanding largely. Another great feature about it is that it is generally supported by the smallest routers and also the firewalls.

BGP is considered as the routing protocol of the Internet. It is also Exterior Gateway Protocol, that is, EGP which means that BGP is used by routers making decisions of routing on the Internet. If your home has got a connection to the Internet then you don’t really need BGP or even need to run it. In case the router has got more than one dedicated connection to, you might require running. It is a path-vector protocol which implies that it can select the best route as compared to other routing protocols. BGP makes use of the “AS-PATH” as the routing metric and also it selects the route which has got the shortest path through the entire Internet.

Thus, we can conclude that the routing protocols are just a set of languages that router makes use of to communicate the routing information along with other routers. The main benefit of using routing protocol is its ability to get adapted to changing the network topology.

This has been a guide to Dynamic Routing. Here we discuss the concepts, advantages and what we can do with dynamic routing. You can also go through our other suggested articles to learn more –