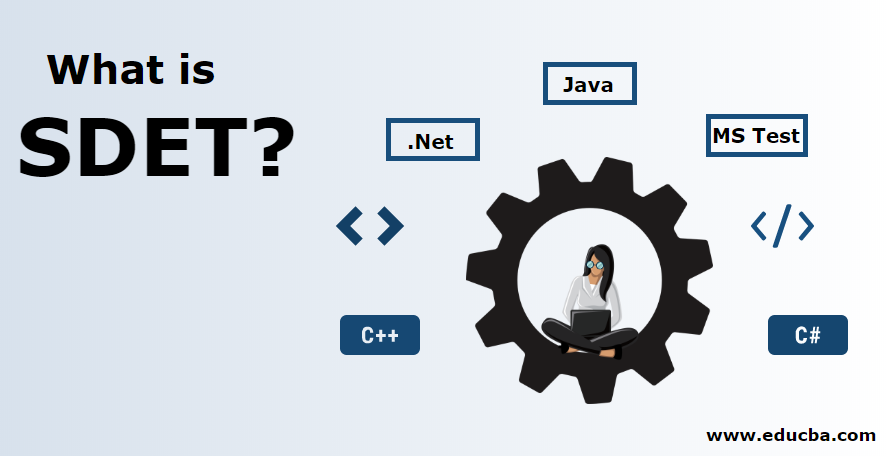 SDET or Software Development Engineer in Test, is a role in the software development process, where the person will be occupied in both the application development and the application testing processes. As the person needs to be a multi-talented one, it is essential to keep he/ she in the entire development and testing procedures. This role needs to have extensive knowledge of the end-to-end functionality of the entire application, including the updates of the current requirement specifications. Additionally, it is crucial to hold the technical understanding on the platform, programming language & DevOps measures, along with the testing concepts required for that particular application.

It is otherwise called as Software Development Engineer in Test, is a work job inside Software Testing and Quality Assurance Domain. The term was initially utilized by Microsoft and afterwards Google with a perspective on substituting daily and repeated the manual testing task with automation.

Throughout the years, an always-increasing number of companies are employing these professionals as it’s a significant job in Agile and DevOps. In any case, it’s a demanding job to fill. Technology advances in all respects rapidly and analyzers need to get familiar with a ton to remain in the game. In the DevOps universe testing is how the job of an analyzer has changed in the most recent decade, thus making the lack of exceptional testers.

How does SDET make working so easy?

While it’s significant that SDETs be proficient programmers, the best SDETs are efficient testers also. On the off chance that the most beautifully crafted software test code is not enough to check the expected actions, at that point it’s useless. This kind of script will quite often report success since it’s not really approving anything or if nothing else not what it ought to be.

What can you do with SDET?

Being a technical software tester with an emphasis on creating test scripts that are automated is precisely an SDET’s additional responsibility. Ordinarily, they are a piece of an agile group and work close to developers to assist automate Acceptance Criteria in consumer narratives.

Just as taking part in regular QA exercises, they can compose anything from automated tests integration, API tests as well as UI automation tests. Likewise, SDETs could assist audit unit tests which are composed of the developers.

In this advanced age of competition, when organizations are hoping to display their digital capability, the job of an SDET (Software Development Engineer in Test) is increasingly growing popularity among them. Broadly it is determined through Microsoft and it’s experiencing, as it can be observed with the rising demand of SDET by numerous organizations across several technologies and domains for a role in the ecosystem of the project. This job is anticipated to be a substantial necessity in the short to the long period of the lifecycle of software development with its noticeable expanding as more projects understand their advantages. Any developer or SET with a flawless programming foundation and a propensity for quality can join the campaign and make profitable contributions.

Why it is Important?

Essentially, the SDET is a tester of software with skill on the code writing. Dividing it to evaluate ie it effectively creates a piece of software for the software developer, an SDET can compose a code to test it. It’s an advancement from an automation tester who builds a structure and executes it to discover an issue. SDET, who are relied upon to be capable in any event one programming language, broadens it past the conventional extension by including unit tests and parts of white box testing.

Why should we use SDET?

With the progression of time, an unmistakable pattern or inclination toward the SDET will be seen over the business. The unmistakable advantage of having testers with great information in compositional structure and coding models is apparent as far as coverage of code and higher situations of a break in the code.

Why do we need SDET?

Today organizations are seeking down a specialist who can take part in software development. Meanwhile, he should similarly manage the testing of the developed software. That is the reason hiring SDET helps them as they can work for growing high-performance code or managing the testing structure.

Following are some significant non-technical abilities for an SDET:

An SDET must have superb written and verbal conversation ability. Testing materials such as plans, test strategies, test cases, bug reports produced should be simple to read and understand.

An SDET work is extremely demanding, particularly amid the code release. A software tester should proficiently oversee outstanding task at hand, have high profitability, time the management aptitudes.

To turn into a great software development engineer in Test, you should have a dignified demeanor. These professionals should be ready to redesign your specialized aptitudes with evolving innovations. Your frame of mind ought to have some dimension of autonomy. In this way, you can take responsibility for tasks allotted without a lot of supervision.

To appreciate accomplishment in any IT proficient expert, you should have a critical level of enthusiasm for it. An SDET ought to have the enthusiasm for testing, advancement, and planning.

Below given are a few skills in technical aspect expected from SDET:

Who are the Right Audience for Learning SDET Technologies?

There is a pattern among organizations to adopt new innovative technologies and methods. In this way, SDET programming experts are exceedingly on interest. Anyone with apt knowledge of technology and enthusiasm for testing is the right person to further their career in this direction.

How this technology will help you in Career Growth?

By opting to become an SDET your career progress in standard CMMI level 5 organization will seem like the below-mentioned following but will differ from organization to organization:

Hardly any individuals see the job of the SDET is a unique succession of testing for the days to come, where it’s more probable it will coincide with other conventional and time-tested procedures.

An SDET expert is a blend of an engineer just as a tester who has experience in project management. This across the board sort of range of abilities make the SDET employments additionally difficult and exceptionally demanding in the present market.

This is a guide to What is SDET?. Here we discuss the basic concept, advantages, required skills of SDET. You may also look at the following article to learn more –