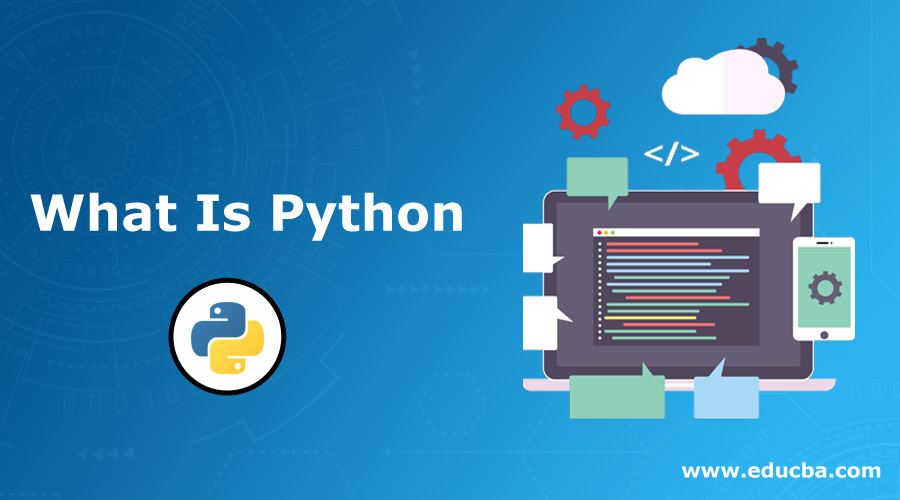 It is a programming language developed by Guido van Rossum, which is interpreted, offers high-level features, and incorporates characteristics of a general-purpose programming language. Its structure is based on garbage-collection and dynamic typing, supporting multiple programming paradigms such as object-oriented, functional, and procedural programming. These technical aspects render it a dynamic character and allow programmers to leverage it for small as well as large-scale real projects.

As per the above answer, we can see that we have used two keywords while defining it. So, let’s first understand the meaning of those first two keywords.

As you can see, I have used the keyword class above, so what does class mean?

How does Python make working so easy? / Why do we need it?

The reason why it makes working so easy is because of its simple syntax and readability of code. Unlike other programming languages like C, it has much readable and concise syntax, making it easy for beginners to master the concepts and reach an advanced level. For example, even if you want to print your name, you have to write around 7 lines of code in C#, but with python, that can be done in one line only, making a huge difference and giving an advantage over other languages.

Let us discussed a few companies which are actually using this:

Google has been a supporter of python for a long time. Even if scripts were written for Google in Perl or bash, they were re-written in Python because it is easy to write, deploy and maintain. It is now official Google’s server-side language, the other being C++ and Java.

Facebook also uses Python to a great extent making it the third most popular language at the social media giant, just behind C++ and PHP. Facebook has published numerous open-source projects written for Python 3.

In 2016, the Instagram Engineering team announced that they were running the world‘s largest Django Framework, which is written in Python. Instagram’s team has invested time and resource in keeping their python development viable (approx 800 million monthly active users).

The huge crowdsource questions and answer platform use Python because of its ease of writing and readability.

It uses mainly for data analysis for recommending and suggesting users with shows and movies. The main reason for using it is an extremely active development community.

The above companies are some of the big companies using Python.

What can you do with Python? /Where should we use it?

So, now the bigger question is what we can do with it or rather where can we use it?

The answer to this question is that it can be used almost everywhere. Here are a few areas where you can use it:

Since it is an Object-Oriented Programming Language So, like other Object-Oriented Language, It can be used for Web Development, and also, it’s easy to syntax and has better readability. Django and Flask are the two most popular Python Web Framework.

We can use this for scientific development as it has a SciPy library, a numerical computation library numPy, and it also has Matplotlib, which has a 2D plotting library for visualization. It can install the MATLAB Engine API so that it can interact with MATLAB as a computational engine. It is also a highly extensible language. It can use a web front end which means it is a web framework like Django, and flask can use Python as an API with a web front end.

It is one of the most important features or area which swings the meter in favor of Python. It can be used to create machine learning algorithms as it can use a sci-kit library. We can build all types of models, such as Linear Regression, Random Forest, and many more even libraries like tensor flow, making it easy to create deep learning models. The popularity of this has risen multifold due to its use in Machine Learning and AI.

The below screenshot shows how a Jupyter Notebook looks.

So the highlighted box that you see is called a cell. Here we write the code or instructions that we want the kernel to execute.

After writing the code, you can press the play button on the toolbar to run the specific cell. It is very simple.

1. Example, if we have to add two numbers, a and b, its syntax is as follows:

The screenshot below shows the same in Jupyter: 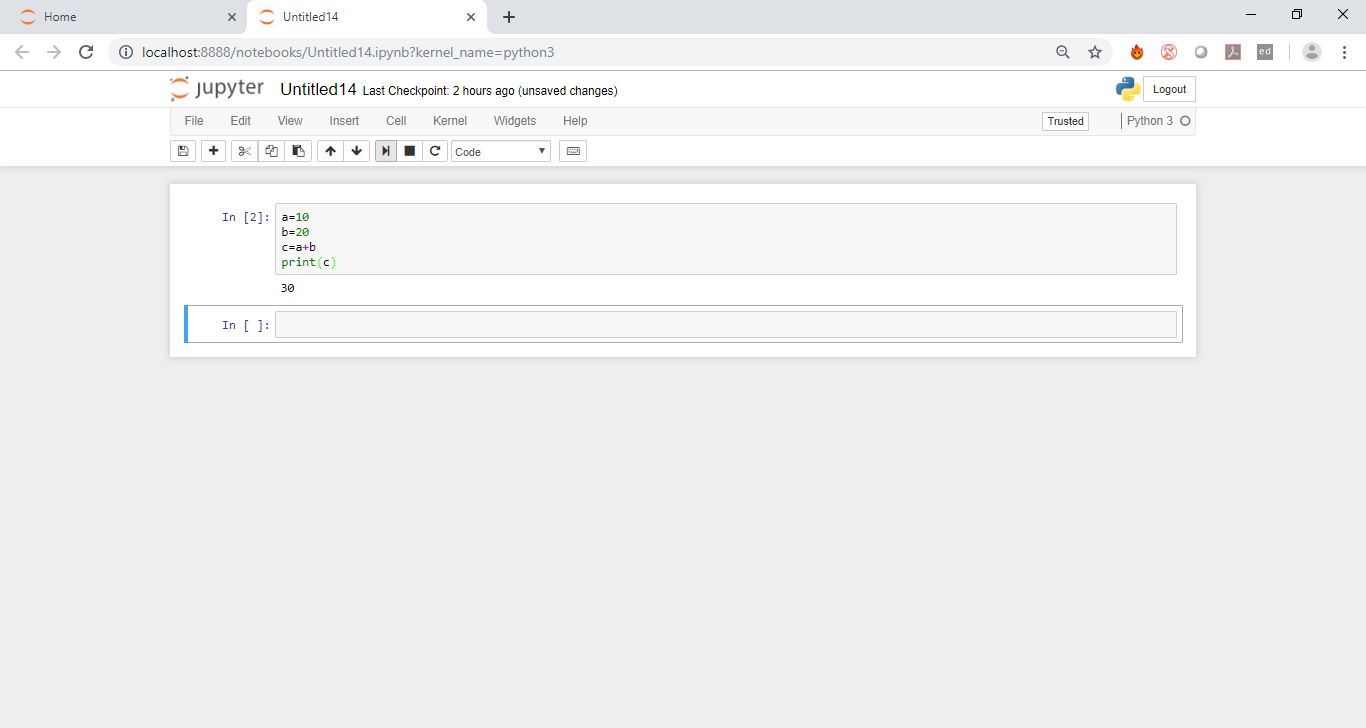 2. For mathematical and numerical computations, we can import libraries like numpy and pandas libraries for working on datasets. The syntax for that is:

Below is the screenshot for the same: 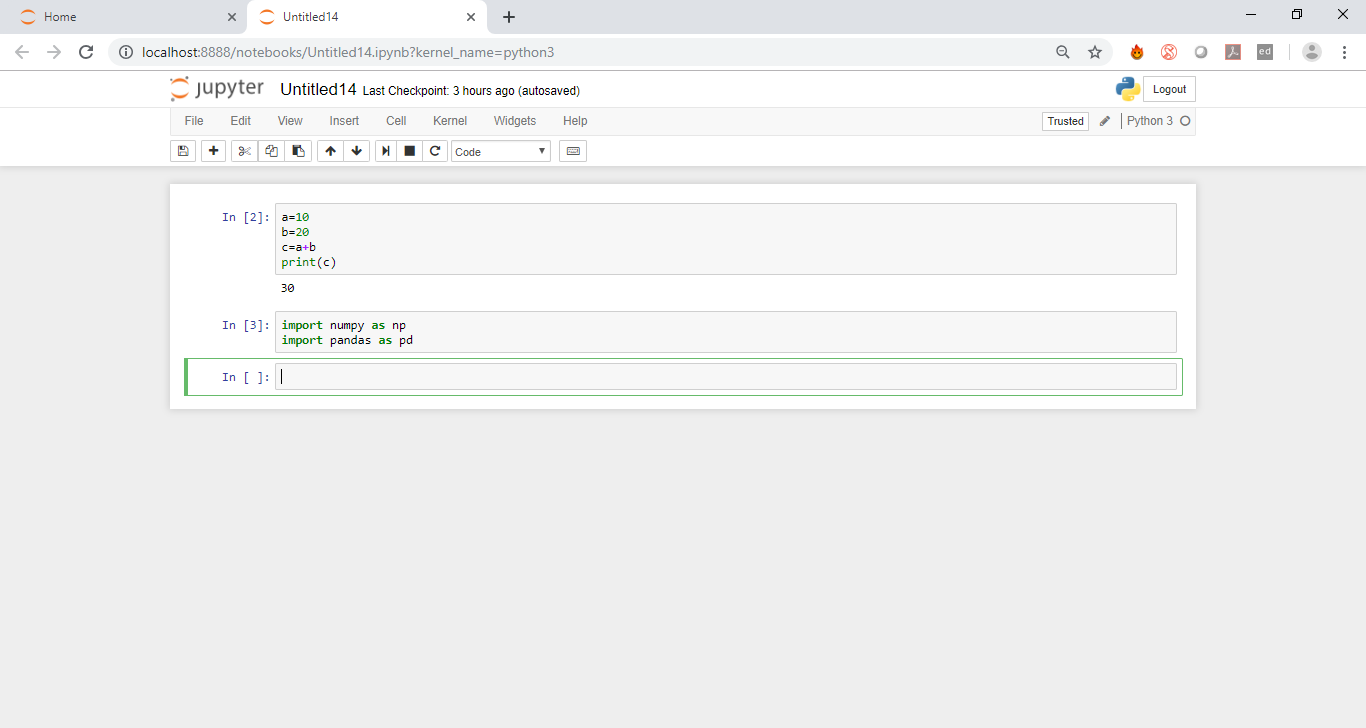 3. Next, we can see how to build functions. Just like other languages, we can also build methods then call them later on in the program. The following example is to show how to create a Fibonacci series function for the first 100 numbers

We can call the function by using fib(100)

Here is the Screenshot of the above code 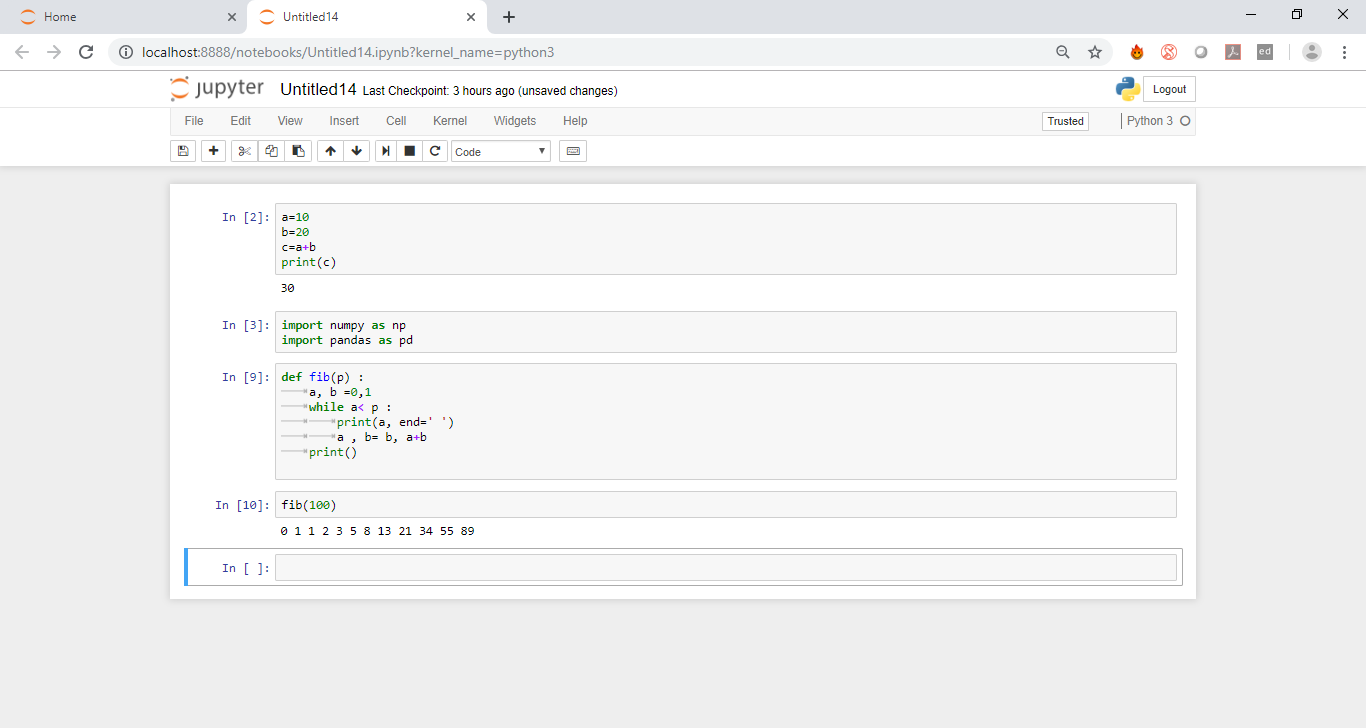 4. Next, we will see how to create conditional flows like if and if-else as there are very important for any programming language. Here is the sample code to create a conditional flow, and we are going to take input from a user using the input statement:

In the above code, a sum is used to store the sum of all the numbers after each iteration, and the range(10) means it will start from 0 till 9, not include 10. The answer should come to 45.

6. We also have a while loop. In the below example, we are going to print I as long as it is less than 10, so here, if we see it, we do not know exactly the number of iterations. So, we also called the while loop has an entry controlled loop.

The skills required for a good developer is the same as any other developer. The person should have a good knowledge of OOPs(Object Oriented Programming) concepts so that he can play with an object in python, and then only he can use the full potential of Python. He should have good knowledge of those frameworks like Django and Flask, depending on your technology stack. The person should also have a basic understanding of front-end technologies like HTML, CSS, and JavaScript. There should be familiarity with event-driven programming in Python. A basic understanding of the database is required as database knowledge helps in writing proper queries.

The unique feature that makes it stand ahead of other languages is its use in analytics, data science, and AI. To be good in those fields using python, one must have good mathematical knowledge, especially in statistics a; good domain knowledge also helps in choosing the right model for fitting it into the right kind of data.

There are numerous advantages. Few are mentioned below:

Its scope for now and the future is enormous. Almost every company is using it in some way or other in their business. It has a scope in Web Development, Data Science, Data Analysis, AI, Machine Learning. The scope of Python in Data Science/Analysis is much more as compared to other programming languages.

Who is the right audience for learning Python technologies?

The right Audience for this is anybody with an appetite to learn and having a basic knowledge of OOPS. Freshers, especially from streams other than computer science, will find the much easy to understand that, for example, C++.

Learning this language gives you an extra advantage in your carrier. It is a versatile language, and its preferred use in scientific and numerical computations and data analysis and machine learning gives it an edge over others.

To conclude, I would say though this was created in 1990, It is very much in use today, and its use is going to further increase, especially in data analysis/data science and machine learning.

This has been a guide to What is Python?. Here we discussed the basic concept, working, required skills, top python companies, along with advantages and scope. You can also go through our other suggested articles to learn more –