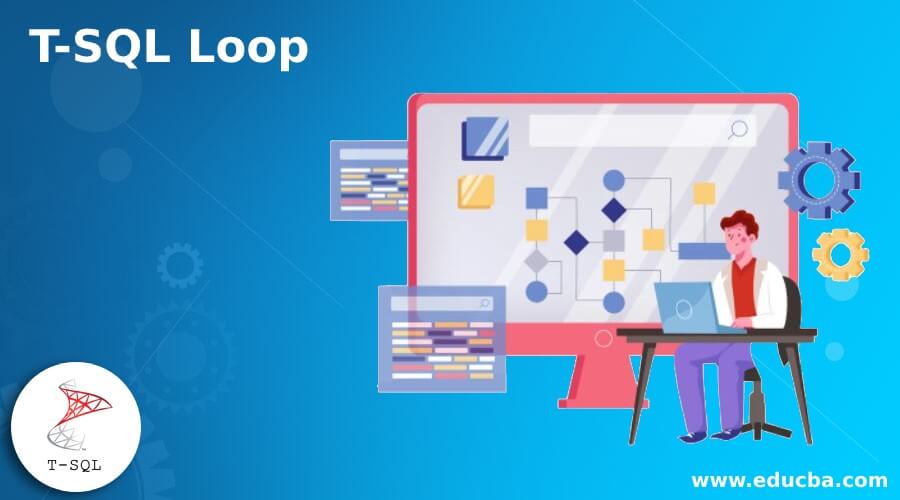 What is T-SQL Loop?

The T-SQL can execute the ‘WHILE’ loop by authorizing us to duplicate the specific code while the loop condition detains; if we want another loop, then we can re-produce them with the help of the WHILE loop, so loops can be frequently used in which queries can perform most of the task. Still, sometimes loops can be instrumental and can make our life easier.

Usually, there are three types of loops:

Let us see the T-SQL server loops, in which let’s consider we have a WHILE loop at allocation.

From the above statement, we conclude that when the WHILE loop conditions are true, then BEGIN—END block has been implemented, and if we are discussing the SQL server loop, then we can say that we have an attachment and we can able to make use of them in the WHILE loop.

Let us see the above by using the example:

In the above example, we have stated the variable as @i and placed the value that is 1; if the surviving value of the variable is <=10, then we can enter it into the looping body, and statements have been executed whenever we try to enter into the body, it will increment @i by 1, in this way we can say that the value of variable @i will be ten at some places and that can stop the loop for running over and over again.

Different examples are mentioned below:

By utilizing BREAK and CONTINUE statements using nested IF…ELSE and WHILE.

In this example, we have tried to use the BREAK and CONTINUE keyword, and also we have used the nested IF…ELSE and WHILE statement, BREAK statement has been utilized in the T-SQL WHILE loop to instantly terminate the surviving iteration loop if there are various conditions, generally IF…ELSE statement has been used to verify whether the conditions have occurred or not. The CONTINUE keyword can be utilized in a T-SQL statement with a WHILE loop in which it can stop the surviving iteration of the loop when there is a specific code available. Then the new iteration will begin, and if we want to write even numbers only then WHILE loop has been used, we can use the CONTINUE statement to control such conditions. 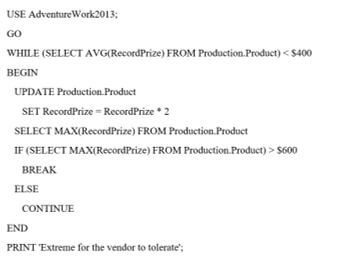 By utilizing WHILE in the cursor. 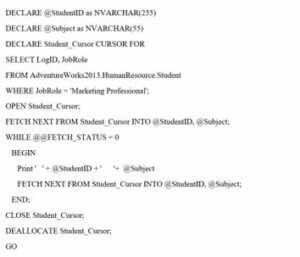 In the above example, we have tried to utilize the @@FETCH_STATUS to manage the activities in the WHILE loop.

In this article, we conclude that the WHILE loops can be used for placing conditional statements so they can have a body of the statement; if we have to execute a statement, then the loop can be used, we have also seen the definition of T-SQL, T-SQL server loop, and examples related T-SQL loop.

This is a guide to T-SQL Loop. Here we discuss the introduction, T-SQL server loop, and examples for better understanding. You may also have a look at the following articles to learn more –