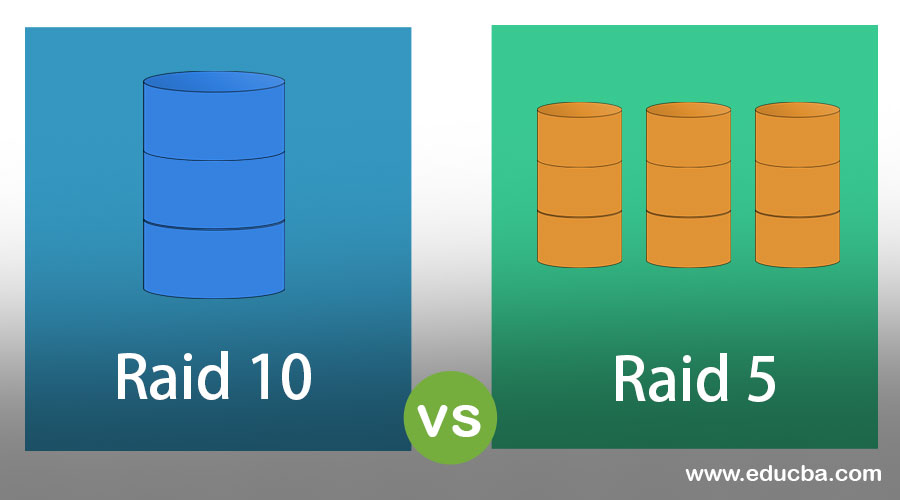 Difference Between Raid 10 vs Raid 5

In this article, we will see an outline on Raid 10 vs Raid 5. RAID stands for Redundant Array of Independent Disks. It stores the same data on different places on various disks so that the data is protected from drive failure. The term RAID was coined by David Patterson, Garth A. Gibson and Randy Katz in 1987. There are standard RAID levels in computer storage. Various Raid levels protect data and are an upgrade from the previous one. Fault tolerance is done in Raid level 5 and data is distributed in multiple disks, whereas Raid 10 combines disk mirroring and disk striping for safe and secure data.  Raid 5 takes some time to build the configuration.

Head to Head Comparison between Raid 10 vs Raid 5 (Infographics)

Below are the top 17  comparisons between Raid 10 vs Raid 5:

Key differences between Raid 10 vs Raid 5

Let us discuss some key differences between Raid 10 vs Raid 5 in the following points:

Comparison Table of Raid 10 vs Raid 5

The table below summarizes the comparisons between Raid 10 vs Raid 5:

Most Raid levels provide protection and recovery of data but do not protect data from losing from the user. There are also software errors and malware attacks from which Raid cannot protect the data. Raid is not a replacement for a backup plan. We can say that Raid is a building block to protect heavy data loss.