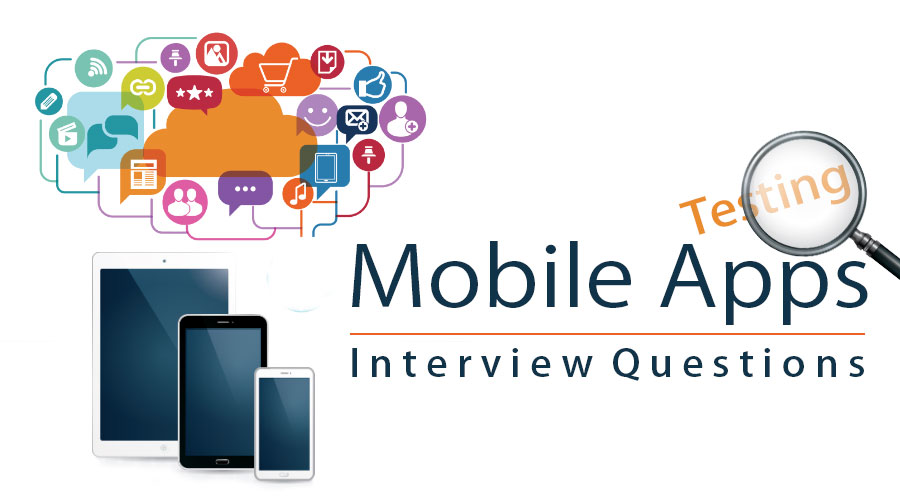 These top interview questions are divided into two parts are as follows:

This first part covers the basic Interview Questions and Answers.

Q1. What are the different types of testing for Mobile applications?

Answer:
This is the common Mobile application testing Interview Questions asked in an interview. The few challenges for testing the mobile applications are like scripting, compatibility, Device availability, an application must be downloadable generally from an app store, a variety of mobile devices, application to pick the call, mobile network operators, the way of testing.

Q4. What is the difference between the emulator and simulator?

Answer:
An emulator is a software, which is used to test mobile applications without the handset. A simulator is referred to as electronic network simulation equipment for mobile phones and it helps in connecting networks without roaming service and can make voice calls, data and SMS.

Q5. Explain the bugs that are mainly found in Mobile testing?

Answer:
The bugs are critical, major, minor and block. The critical bug is the one when the phone system crashes while testing the particular feature in the mobile handset. A major issue is the one when the particular feature not able to perform its functions as expected. A minor issue is like the interface is not as required or like some label or button not at its place. Block bug means while performing any functionality, the phone hangs up or not able to do anything on the device and need to reboot the device only.

Q6. On what basis the testing automation tool would be used to test the mobile app on the device?

Answer:
To do mobile testing with automation tool and that tool should have the following things:

Q7. What are the advantages of automation testing?

Answer:
The advantages of automation testing in regression testing. It helps in saving time as in regression testing, a lot of test cases need to be done again and again. So, automation testing will run the scripts to test the same functionality again and again. Load and performance testing can be done through or the best possible way as it requires simulation of thousands of concurrent users and devices, which can be possible through tools only. These tools are like load runner. Complex tests have multiple components that need to be tested at once. The other main advantage is availability. The test cases can be run any time as per the requirement. The same thing can be reused means tests or scripts can be used for other devices or applications as well. The most important is reliability as it is performed with help of tools or the scripts. In Manual testing, there can be issues due to human error but it is not possible in automation testing. Test automation has become an integral part of mobile application development.

Let us move to the next Mobile application testing Interview Questions.

Q8. What can be considered to test mobile app development through black box technique?

Answer:
The following things should be considered:

Q9. What is the difference between priority and severity?

Answer:
This is the popular Mobile application testing Interview Questions asked in an interview. Priority refers that how important functionality is and needs to be fixed earlier or later. Severity refers to the consequence of bug or issue in the application means how serious that issue is. Priority is being termed in the following sequence P1, P2, P3, P4, and P5. P1 is referred to as Critical, P2 is medium, and P3 is Low and so on. Severity is termed as Sev5, Sev4, Sev3 and so on. Sev5 is the highest one.

Q10. What are the different tools that are used for Mobile application testing?