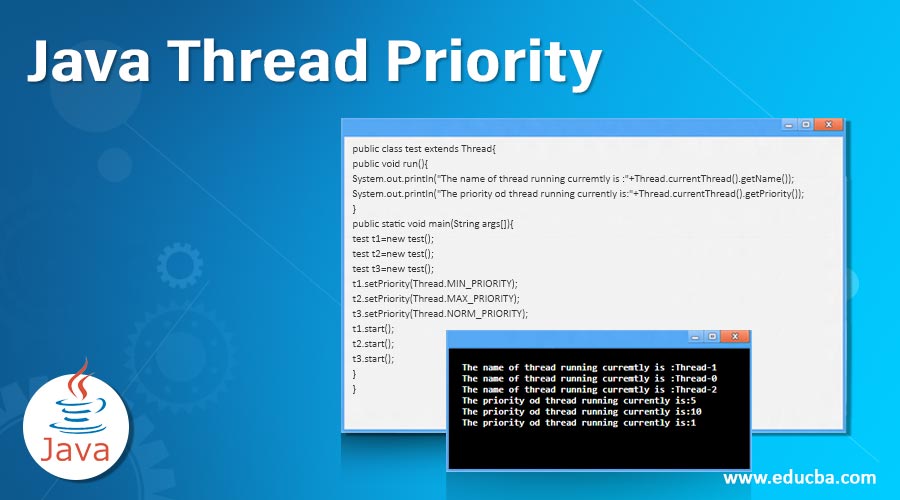 Termed as the “smallest unit of processing”, Thread is a light weight subprocess assigned with some work that needs to be performed. Threads share the same memory slot assigned to them and are independent of each other, thus promotes multitasking. But when multiple threads are running on the shared memory slot, then there is bound to happen a competition on the resource. To avoid this competition so that high throughput can be achieved, a concept of prioritizing threads was introduced. It has a big significance when multiple tasks are running on the same system. The “thread scheduler does the work of assigning executing threads as per the priority”.

JVM (JAVA virtual machine) makes the decision on prioritising thread by default or by the programmer explicitly. The priority degree ranges between 1 to 10, 10 being assigned when we want to give thread the highest priority. Context switch changes help in the transition from thread 1 to thread 2 and so on as per the priority order.

Note: There may be a chance that two or more threads are assigned with the same priority, then their execution depends upon the operating system. For example, Windows use a round-robin algorithm to handle this case.

Some functions associated with getting and setting the priority are:

Following are the examples of java thread priority are:

Below are some examples demonstrating the thread priority concept using the above already defined variables and ready-made functions available in JAVA.

Below is an example of user-defined priority definition and printing.

Note: The priority should strictly fall under the range of 1 to 10. In case the priority lies out of this range, then the compiler throws the below error. I got this error when 13 was given a priority in the place of 9 while setting a priority of thread t2 using the setPriority () function.

There are many advantages associated with multithreading and the assigning the priority to thread listed below:

This is one of the widely used and efficient ways to operate multiple tasks in the same system. Since threads share the memory, this memory-efficient way as well. We can get multiple threads running in the system, but that may confuse the processor upon which one to choose first. This issue was solved with the help of assigning priorities to the thread. The thread keeps on running until it finishes or is interrupted by a thread of higher priority. This functionality works closely with the operating system. Preparing word documents along with internet surfing with music was not so efficient until the advent of the magical concept of multi-threading.

This is a guide to Java Thread Priority. Here we also discuss the introduction and variables of java thread priority along with different examples and its code implementation. You may also have a look at the following articles to learn more –