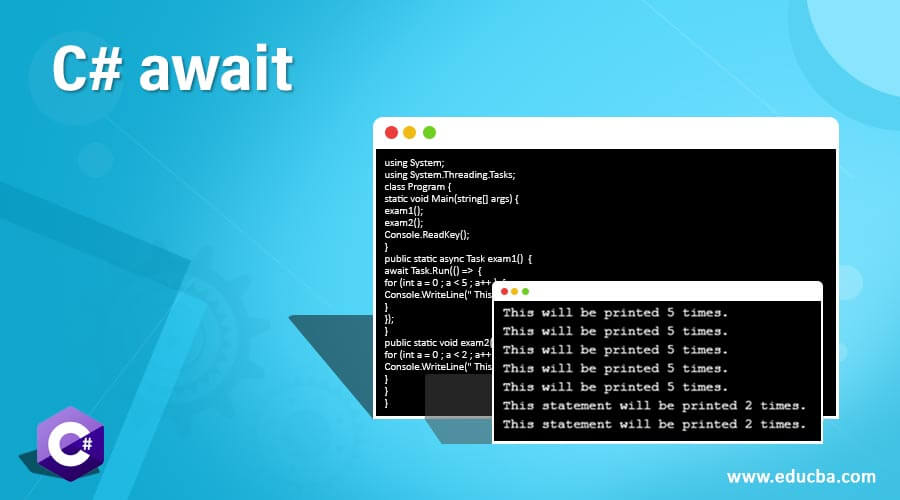 The await keyword in C# programming language is used to suspend all async methods enclosed until the point where the operations presented by the asynchronous method are completed. In order or a developer to call multiple functions in an asynchronous way, async and await are highly used and recommended. It is possible to inherit almost all features of asynchronous programming with just simple implementation of await function along with async. Let us now move on to understanding the standard syntax to implement the await keyword.

The standard syntax for await keyword is simple, it includes the keyword followed by the function or method. The syntax is as follows:

Here, we have the syntax starting with the await keyword, followed by a function, which could be any function over the program. The freedom is to call and pass await keyword to any method class or functions within the syntax.

How await Keyword Works in C#?

As expected, the output is the statement printed twice. For our next example, we will have two different methods which are in no way dependent and we will call them through the main method. The code for the program is as follows:

Code Explanation: For our first example, we have two different methods which are totally independent and we have called these methods from the main method of the program. Starting with the required system files, we have our class program with the main method, the main method within which we call the two methods that are to be declared. Our first method exam1 is initiated, with the await keyword followed by a lambda function and for a statement to print an output statement. Then we have our second method exam2, which has a for a statement, which will print the output statement for a number of times.

As expected, the output statements are as mentioned in the code, moving on, we will implement the await keyword with another example where we will have three methods and few print statements. 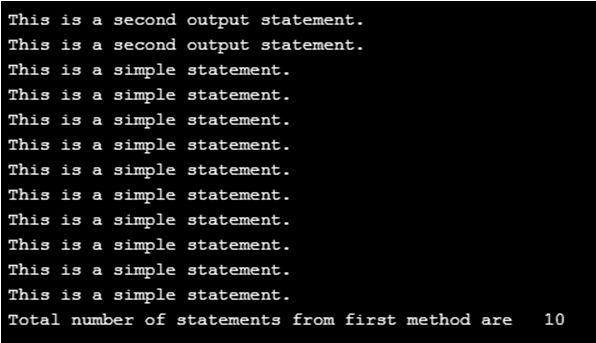 Code Explanation: for our third example, we have three different methods and we call these methods from the main method. With our main method, we call the callMethod, which has has a task to call for the exam1 method and so the exam1 is executed. As per the program, here the exam1 method will not be executed first as it has the await keyword, so it will move to the next method which is exam1 and the exam2 method will be executed, which is a statement, printed twice as mentioned in the for a loop. Then our exam1 method will be printed followed by the exam3, the exam3 method is a single statement. Totally, a 13 output statement will be printed. The last statement will be printing the number of times we print the statement from the exam1 method. As explained the total number of 13 print statements, simple execution of await keyword with multiple methods.

This is a guide to C# await. Here we also discuss the introduction to C# await, how await keyword works  along with different examples. You may also have a look at the following articles to learn more –