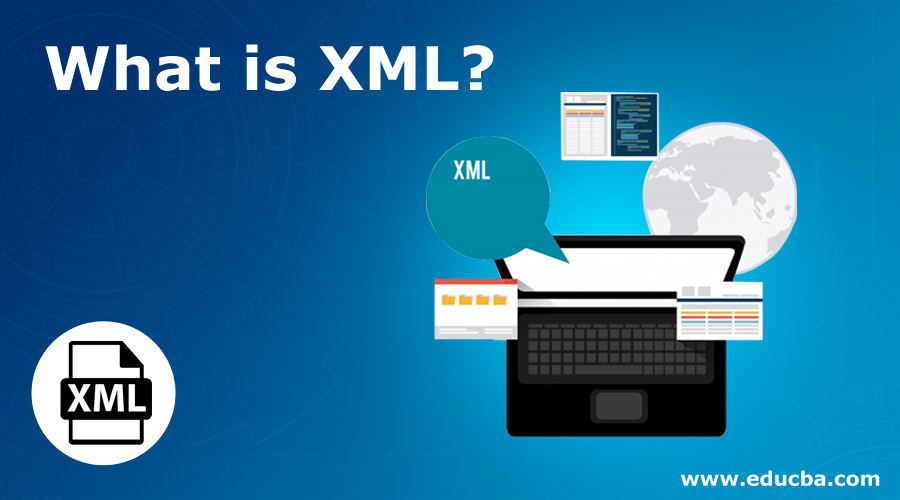 XML can be expanded as ‘Extensible Markup Language’ that is text based language used for defining markup documents to publish on the web. It can contain data and its formatting details as a common data, and XML can be used for its significant features data storing capacity, holding public standards, and being extensible compared to other Markup language. This language was formed from extracting the properties of SGML, that is, Standard Generalized Markup Language.

There are several important features of XML that make it very useful in several spheres of technologies. They are stated as below:

There are several uses of it like simplifying the creation of HTML documents, reloading databases and many others.

They are described as below:

Below is a sample XML piece with a markup appearance:

How does XML make working so easy?

Writing XML documents are easy as compared to other markup languages. There are no predefined rules to follow and authors can create their own tags and rules to serve their needs. In this way, XML is very flexible in terms of developing the document. It can also be put in a backend of any web application to maintain the style sheets. These style sheets can be updated by updating the XML documents.

Due to its simple nature XML is being used by all leading companies like Xerox, Microsoft, Google, Facebook, Ford Motors and many others.

What can you do with XML?

XML is used for storage and transportation of data and information. It is purely a document based technology independent of any specialized software or hardware requirement. XML is also a self-descriptive language. Being self-descriptive, it contains sender information, receiver information, a heading, and a message body. Information in an XML document can be added anytime extending the content of the document making XML extensible. It also simplifies several things like data sharing, data transport, platform changes, and data availability. Moreover, XML is a W3C recommendation.

It can also have a declaration as shown below. Here the XML version and encoding define the character encoding used in the document. A sample declaration is given below:

There are few rules for syntax as defined below:

XML element is closed with either a start or with an end element like <element>….</element> or in simple  clause like <element/>.

XML allows nesting of statements but they should not overlap each other. It means an end tag of an element must have the same name as that of the most recent unmatched start tag.

A single XML document has only one root element like below.

The XML element is always case sensitive which means that the start and end elements have to be in the same case.

An attribute is a single property of an element which uses a name-value pair. There may be multiple attributes for an element. Below is an example:

There are few syntax rules defined for attributes as defined below:

Below given are two types of references:

In entity reference, there is a name defined between the start and end delimiters. Any kind of predefined string like text or mark up can be used as a name.

The character references have references containing hash mark (“#”) followed by a number. The number refers to the Unicode of a character.

The names of attributes and elements are case sensitive meaning the start and end attributes should be in the same case. All the character encoding problems can be avoided by saving the document in Unicode UTF-8 or UTF-16 format. This causes all the blanks, tabs, line breaks between the attributes and elements to be ignored. There is some XML reserved syntax which cannot be used directly. There are some replacement entities that are used to avoid this scenario.

Below are the advantages of XML:

1. The document standard is an International standard and is maintained by W3C, the organization that is responsible for maintaining web standards. XML documents are not particular to any vendor nor tied to any single application or organization. There are a lot of varieties of document writer that are available in the market. Some of them are often proprietary and works with the software allocated for that particular type of document. However, XML documents can be created in any editor and can be edited on a different editor thus making it independent of a particular assigned editor. Even Notepad text editor can be used to create XML documents although it is not recommended.

2. XML tags or XML elements are used to define the structure of an XML document. Once document structure is defined after that processes can be selected like style sheets to manipulate the content and reuse them after manipulation. With content being separated from display we can use a single source content in many different contexts. Unlike HTML, XML does not have a fixed number of tag or elements thus allowing the designer to design a document having tags that are meaningful. XML allows designers to create markup language according to the needs. Even new elements can be defined as per requirement giving the designer the ability to make custom elements is a unique feature offered by XML.

3. They provide a feature of reuse of the contents thereby allowing the different organizations to save much money and effort along with making the authors more efficient. Once content is created that can be used in several other documents. XML documents are often manipulated to adjust the needs of different users. Different style sheets can be applied to an XML document to manipulate the content which is appropriate for some particular users or to output different types of documents.

4. The separation of content and format is allowed by XML. A separate style sheet is maintained where the formatting of the XML document is done. Thus, because of this independence, easy updating and maintenance of the document are possible when needed. Also, it is easy for maintaining a consistent stylesheet for all documents when the content is separated from the formatting.

5. It is very useful when publishing a document in more than one language or multiple languages originating from the same source. The override of translations also can be reduced if the content is stored in XML source files. Thus, when publishing the documents in several languages can be done with just a single click. The formatting is automatically applied when publishing the source XML files.

Why should we use XML?

There are many purposes of using XML like, to transport the data in a structured format from a source point to any destination and many others. The tags used in XML are for ensuring the structure of the data. The combination of tags and texts are used to store information. The text is surrounded by tags which are written following pre-defined rules and contains meaningful information about the enclosed text. Thus, it is very easy to store information and transport them very easily.

Why do we need XML?

The need for it is vast as it is used for outsourcing the data primarily. HTML documents use XML to store the data as a backend. It stores the data in a plain text format and it is independent of the platform which can be imported or exported or simply move from one place to another without any problem.

Who is the Right Audience for learning XML Technologies?

Though it is pretty easy to learn a pre-requisite knowledge of XSLT, XQuery and XPath will be good to have for an audience wanting to learn. Apart from these, knowledge of HTML is also a good thing to have.

How this technology will help you in Career Growth?

It is such a technology that is used almost used in all the companies using basic data and web operations. The opportunity of having a good salary is also evident from the uses and advantages offered by it.

XML is a standard representation of web information which is supported by lots of generic tools and also it is a notation for hierarchically structured text. It is the encoding for upper-level-languages such as RDF for defining information about documents and for OWL to define ontologies. It is also a fundamental building block of the Semantic Web initiative.

This has been a guide to What is XML. Here we discuss the understanding, working, scope, skills, and advantages of XML. You can also go through our other suggested articles to learn more –