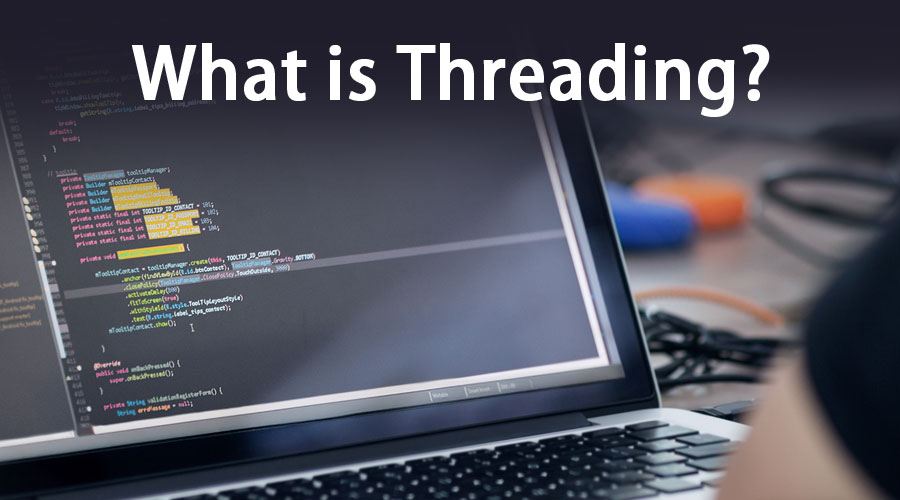 It is a lightweight process that executes code sequence and all the data supporting structures such as opened resources, memory map, stack, etc. In case you want to run the code in parallel, making programming easy. It takes benefit from the architectures of multi-CPU. It can also run multiple processes or multiple threads within one process.

In computer language, It is precise for the implementation of a thread. For a program, a thread is a way to break itself within more than two parts concurrently while running the tasks. There is a difference between processes of each operating system with another, although, usually a thread consists within a process and they are distinct in the very process share similar resources in the meantime diverse processes in the same multitasking operating systems cannot do.

It has an autonomous flow controlling that functions within a similar address as other autonomous flow controls inside a process. Conventionally, process and thread the attributes are arranged into an individual entity known as the processes. Furthermore, at times, the threads are referred to as light processes; either the essence of the word thread is at times somewhat changed.

In conventional systems process of a single thread consists set of characteristics, and in systems of multithreaded systems, their features are split among the threads and processes.

How does Threading make working so easy?

The working is made easier through threading programs, particularly of multithread. Significant enhancements of threads programming are parallel programming techniques are simpler to execute, and multi-threaded programs give excellent performance. However, the threads have few constraints and cannot be utilized for a few specific goals, which still needs multi-processed programs.

What can you do with Threading?

The process consists of more than one thread, and all these threads share the opened resources; memory map in the same process have their stacks. It has more benefits than drawbacks. One uses the process to run a program independent at the equivalent time, not having particularly written to operate with one another. Utilizing these processes provides you preferable security for the unintended interference within tasks which can be either errors in programming or something malicious, so chrome only processes per tab rather than using threads. Moreover, Chrome uses more memory than Firefox when more tabs are opened. You can save memory by the use of threads, and multiple things are shared through.

Why are threads important in programming?

It makes the programming easy as the threads interact through sharing variables with proper synchronization. Few programs permit you to pick out either threads or processes; for instance, it is an Apache webserver an open-source. Apache generates by default a new process for each client to service specifically to them. Although, you can alter the configuration to use threads alternatively. By utilizing threads, you can make it run fast, reducing the memory used in high loads; however, it opens up the chances of security issues. For example, in case there is a bug in Apache, then an attacker might locate it and might be able to access all other information.

Why should we use Threading?

They are perfectly befitted entities for modular programming as they provide easier data sharing as all threads inside a process share similar address space and robust synchronization abilities such as condition variables and mutexes. Programs are usually fashioned as numerous different components communicate with one another to create an aspired outcome or service. A program can be executed as both a complex or single entity that executes multiple uses amongst the program’s distinct portions. The further simplistic answer comprises of executing numerous entities as every entity is performing their part of the program and sharing resources with other entities.

The scope is wide as numerous programming languages support it in some capacity. Several executions of C++ and C support it along with enabling a path to the threading native APIs of the operating system. Few higher level generally cross-platform programming languages like dot net framework, Java and Python. They uncover to developers during the abstraction of the platform-specific differentiation in threading executions in the runtime. Numerous other programming languages and language extensions, including striving to abstract the concept of concurrency and threading from the developer completely. Few languages, however, are devised for sequential parallelism rather, without needing threads or concurrency.

Through the utilization of various entities, the program can be divided as per its different undertakings, respectively having a correlated entity. These entities don’t require to comprehend anything regarding the program’s different sections besides while they give and receive data reciprocally. In certain circumstances, they should coordinate with each other to assure data integrity. It helps you perform these tasks as entities in the program.

Every programmer’s career depends on the performance of the codes; especially, it’s great if they run smoothly and faster. It will assist you while creating programs or low-latency APIs that break down through billions of data points; speed is a gigantic aspect. It will help you achieve that goal.

Even with its limitations have great use within several programming languages that can help you to perform multiple processes. It is majorly used as a child process to smoothen the process, sharing the same address space and maximum data with all other threads running in the same process. As far as each user can understand, the program seems to be running just for him.

This has been a guide to What is Threading?. Here we discussed the basic concept, working, scope, need, along with career growth and advantages of Threading. You can also go through our other suggested articles to learn more –