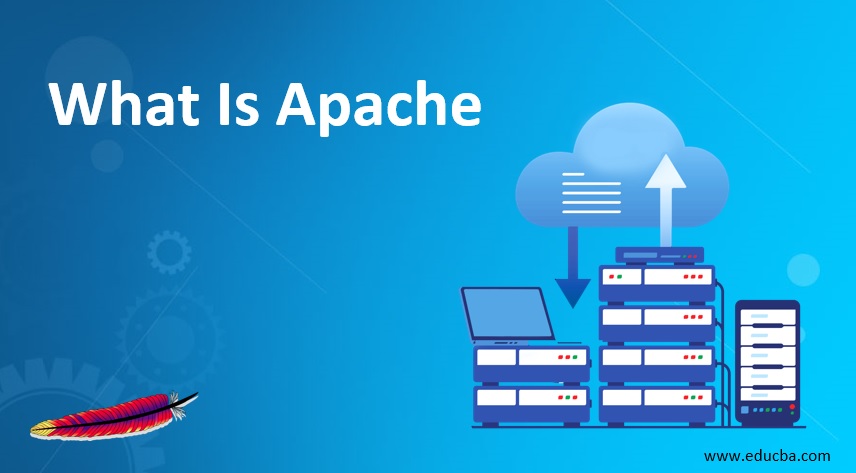 An open-source cross-platform server used with web services that allow users to serve web content on the internet that is developed and maintained by Apache Software Foundation is called the Apache server. Files from web server or database servers are stored on a physical server to use it when needed. Web server stores files from the internet and acts between physical servers and client machines to give content based on user requests and deliver it to the web service. The connection between servers and browsers is established and Apache works in both Windows and UNIX to deliver the files.

It is easier to use and mostly, this Server is good to use for the deployment of several web applications. It enables most of the complex functionalities to be implemented easily and reduces the development time and resource utilization by providing existing functionalities. Projects or libraries can be added as dependencies or jars into the projects and can be used based on the software application’s functionalities and requirements.

Apache Projects Foundation has a lot of subsets in it. It has divided its software development projects into several groups or areas called top-level projects which were also called the Project Management Committee previously. These are all called sub-projects. It has the necessary intellectual property rights to develop and distribute its projects when it has Licensed. There are different categories and sub-projects under each project.

What can you do with Apache?

There are several advantages which are described below:

Why should we use Apache?

It should be used with many software applications in order to utilize the existing open source and free libraries efficiently and effectively. It supports server-side and CGI model and also with several other HTTP compatibilities etc. It has a lot of common requirement jars with utility functions which are highly essential. For example, there are Apache Utils and Commons which are the jars mostly used for doing common utility functionalities, and these are mostly used in any automation or large projects like handling large data operations or file operations, etc.

The scope of this is very high in terms of compatibility and integration with several cross technologies and platforms in order to be used along with multiple technologies. It almost has all the types of technologies, programming languages, and frameworks used in the development of its own projects which are compatible with many external applications. The software or projects are available in the form of both the binary and source code versions on the Apache website. It can be used as its own internal server or along with any other web servers. It has a lot of scope in many projects and we can see almost all of the web projects having the dependencies as any one of the existing projects from Apache Software Foundation.

Why do we need this technology?

It is needed as a supporting software or libraries for developing any other custom applications or software for the specific requirements of an organization or company or business requirements. The time needed for the development of the common functionalities or known solutions for the known complex problems are already well identified and resolved in the form of existing projects.

These projects have a lot of sub-projects within them and it has a diverse number of technologies involved in the development of its open-source libraries. The technologies used in this project cover almost all types of technologies, frameworks, libraries, and interconnects with multiple numbers of cross-platform technologies or run time environments. These projects and their technologies are in very demand and especially related to the Big Data or Hadoop related projects are in high demand which will increase the opportunities of the aspirant in an easy manner. There are many top-level projects in Apache which are Spark, Kafka, Hadoop under the area of big data technologies that are having very good ratings and in high demand over the Apache Projects site.

It is one of the best open-source projects available in the market as of now. Almost all of the software applications or products use Apache projects or its subprojects in its software development lifecycle to utilize some standard tools which are opensource and were developed very efficiently. All the projects are well developed by a group of community developers who are highly skilled and efficient in developing applications. The developers involved in developing these projects are from the open-source developer community and even top companies also sponsor the development or maintenance of these projects resulting in stable maintenance with timely releases or bug fixes etc.

This has been a guide on What is Apache. Here we have discussed the advantage, required skills, and subsets of Apache. You can also go through our other suggested articles to learn more –