What is After Effects? 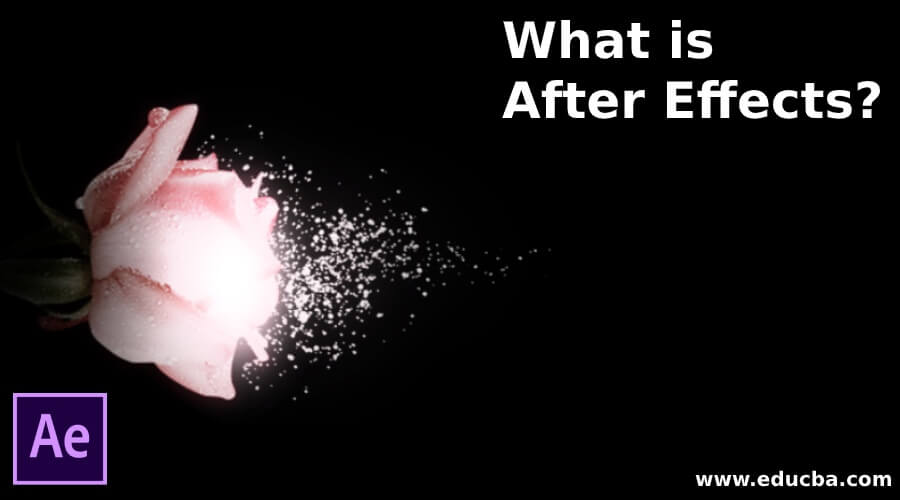 Overview of After Effects

After Effects is a commonly used program in the digital world of technology, the program is used for creating motion graphics, visual effects, and compositions. The program is created and developed by Adobe Systems. It is mostly used for giving effects to the videos and animations of movie clips after they are shot. The most basic use of Adobe After Effects is to edit and enhance the video’s quality and visuality. The program is also used in the post-production process of filmmaking by filmmaking studios and companies.

After Effects helps graphic designers and motion artists give animation to logos, cartoons, and objects with the help of a keyframing process. Adobe After Effects lets the user put their imagination and creative minds to reality and develop amazing visual effects and graphics. The program is specially designed in such a way that the files created do not get destroyed, and hence the program supports a non-linear editor.

How After Effects Makes Working so Easy?

After Effects supports tools and functions that make the working of the users easier and simpler. Although the program is not easy software for beginners, it has so many editing tools and features that make Adobe After Effects an important and attractive software. The program features Camera Tracking that helps the user to edit the original video and modify and add any text or video in between the original video clip. It also has Motion Graphics Animation that helps the user apply motion to still images and add them to any video clips; after Effects features a special feature called Expression that helps the user speed up the animation process by controlling the animation sequences using codes and lines as the value.

What are the Uses of After Effect?

After Effects is generally used to create compositions with the help of tools and features present in the program itself; with the help of the 360-composition editor, the users can edit and compose videos and work on the VR Videos as well. The program also features a visual keyboard shortcut editor. This editor helps the user to create keyboard shortcuts of their own, which helps them to modify and animate the videos more easily and speedily. After Effects features VR Composition Editor, VR Converter, VR Rotate Sphere, Data-Driven Animation, Enhanced 3D Pipeline, Text Input Improvements, and GPU Accelerated Effects. In addition to this, After Effects also supports an interactive Interface and an efficient workflow. The users can view the shortcuts on the keyboard user interface and edit them accordingly.

In addition to these features, the program also helps the user to create Nulls from the panel used for path making, and the special feature Expressions helps them to create Masks, Shapes, and Brush lines accordingly.

Advantages of After Effects

The program is specially created and designed to help the artists and editors create good quality videos and realistic effects and graphics. The program can edit and recreate any video sequence or clips or even add floating and motion texts to the videos. In simple words, the program helps the user to create professional projects and presentations easily.

The CC version of the program has many updated tools and upgraded functions that help the user. The user can now use the Refine Edge Tool, Refine Soft Matte, Mask Tracker, Content-Aware Fill, Modified Expressions Editor. Many such regular updates help the users and artists stay in coordination with the latest tools and techniques.

Why Should we Use After Effects?

After Effects is not an easy program to learn, but once practiced and learned the basics of the program, it can help the users to create many realistic projects. We should use the program as After Effects is the only program that is popular and demanding for its animation tools of Keying, Tracking, Compositing, and Animation. The program helps in the modification of audio and video simultaneously. It also helps the user in Media transcoding and editing.

The scope of After Effects is bright and good. This is the only program developed by Adobe Systems that gives the user the freedom to edit and recreate any video clip according to him with the help of composition techniques and methods. After Effects is presently used by every animator, graphic artists, motion graphics editor, and 3d artists as well, it is also used in the film making post-production process.

The program doesn’t demand any specific skills from the user in specific. Although, it is considered as an advantage if the user is aware of the animation process, such as using keyframes or adding and editing motion graphs. There are many tutorials available around the web to get in sync with the program and even master the same.

Almost all animation industries and companies presently use this digital technology. After Effects provides a platform for the user to study and gain knowledge on the post-production process of filmmaking, which the user can use to enhance their skills and later use as a career path. Not only film making, but it also teaches many aspects of the animation process and the techniques used in the same. The program is much in demand, and learning the same will help the user to create a career of their own choice.

Adobe After Effects is an efficient program loaded with powerful tools and features. It will help the user gain knowledge and learning; this program will help them master animation and motion graphics skills.

This is a guide to What is After Effects. Here we discuss the basic concept, scope, required skills, and career growth. You may also look at the following article to learn more –