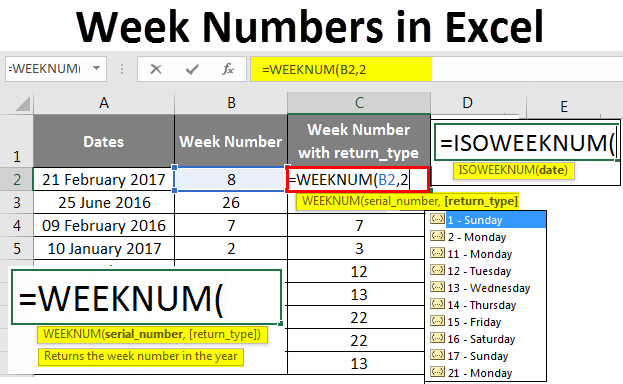 Syntax for WEEKNUM Function in;

The syntax for the excel WEEKNUM function, which outputs week number from a given date value, is as below:

When the above formula is entered on a date argument, Excel finds out the week number for that date and returns a number from 1 to 52 (as there are 52 weeks in a year).

How to use Week Number (WEEKNUM) Function in Excel?

Let’s understand how to use the Week Number Function in Excel by using some examples.

As you might have paid attention above, return_type is an optional argument and can be omitted. If omitted, Excel considers that the first week of the year starts on January 1st, and the last week (i.e. week number 52) will be December 31st.

What if you ignore the return_type? Is it OK? Will Excel still count the week number for a date?

The answer to all these questions is affirmative. Let’s see an example and have a practical understanding of the same.

Suppose we have data as shown in the image below, which has different dates in each cell. 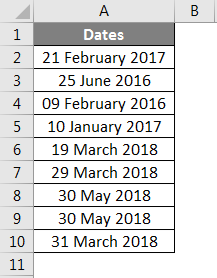 Put the formula =WEEKNUM(A2) in cell B2 and hit Enter.

Excel will return a week value for the date in cell A2. See the screenshot below for a better understanding:

Since we have omitted the return_type, Excel considered that the week starts from January 1st and it’s a week from Sunday to Sunday (Though 1st January 2017 was actually a Sunday, It becomes confusing when the 1st day of the year does not fall on Sunday). 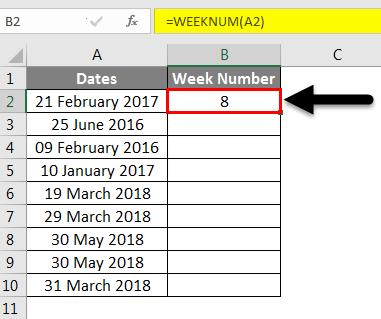 Let’s drag the formula for all the cells and see the values for the week number corresponding to every date value.

See the below example for your reference:

This was pretty simple till here, right?

In the previous section, we ran the function without providing the return_type. Which means, by default, the week starts on 1st January and assumes that it is Sunday.

But which may not be the case of our interest always. Our week might start on Monday, Tuesday etc., at the start of the year.

Therefore, the return_type is there.

return_type has the following list of values supported, and you can also see those when you use it under the WEEKNUM formula. 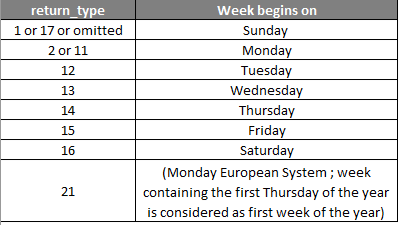 All the above values for argument are used under the WEEKNUM function.

Let’s play around with some of the return_type values and see the magic.

Suppose you wanted your week to be starting from Monday, then give return_type as 2 under the WEEKNUM formula and see if any change in week numbers.

See the below screenshot for your reference. 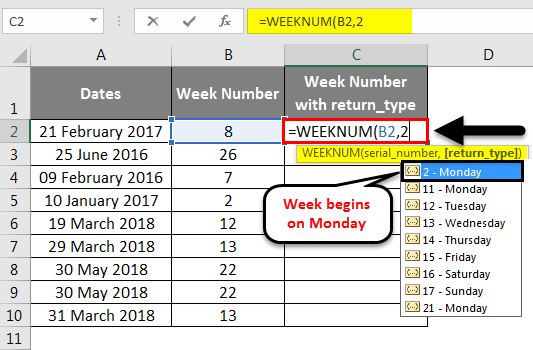 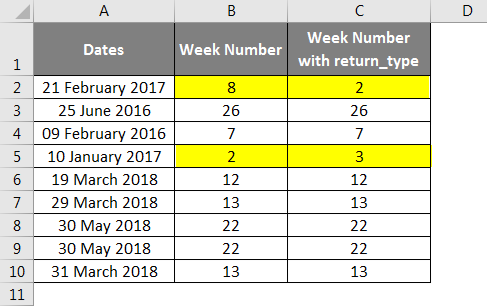 As you can see through highlighted cells, the week number values have changed when we have used return_type as Monday (i.e. 2). It happened because 1st January 2017 is falling on Sunday. So ideally week should have started from the date. But as we have provided the return_type as Monday, Excel considers that the week is about to start from the first Monday of 2017 (which is 2nd January 2017), and hence there is an increase in week value.

ISOWEEKNUM function allows you to find out the ISO week number of the week for a particular date. This function is as per the ISO standards, which says the week starts on Monday, and the week containing the first Thursday is considered as the first week of the year. This function will give you a week value from 1 to 52, specifying on which week the date value falls.

The syntax for ISO week is as above, where the argument named to date is required for the function to calculate the week number as per the ISO standards.

Let’s see some examples of this.

Suppose we have a date 1st January 2017, which is Sunday. The value the ISOWEEKNUM function gives is 52, which denotes the last week of 2016. Because the week starts on Monday under ISOWEEKNUM and the date is falling on Sunday.

As 2nd January 2017 falls on Monday, ISOWEEKNUM gives week value as one.

Now suppose a date 1st January 2015, which is a Thursday. ISOWEEKNUM considering it as the first week of the year, and the same you can see under output.

So, these were some of the examples on week numbers. I hope this article helps you get in the concept right. I will suggest having some more practice with different return_type values under the function to gets hands-on with it.

This has been a guide to Week Numbers in Excel. Here we discussed How to find week numbers and How to use the WEEKNUM and ISOWEEKNUM Function in Excel, along with practical examples and a downloadable excel template. You can also go through our other suggested articles –