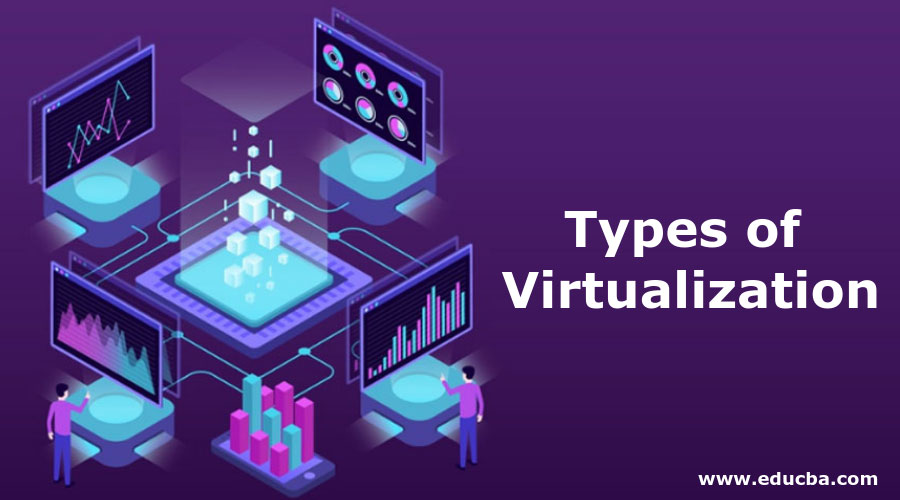 Introduction to Types of Virtualization

This kind of technology basically creates a virtual platform for the users with the help of software’s, wherein this platform can be visualized as a layer between primary (RAM, CPU, ROM, storage, etc) and secondary/virtual system and it also helps us in accessing these primary systems. It is because of this virtualization technology it has to lead us to cloud technology as we know it today as cloud computing, also virtualization has become an integral part of our daily life as we store most of our files in the cloud so we hardly use our desktop storage, it has also averted the fear of files getting corrupted by virus or system getting formatted.

Now let us look at how virtualization works by taking an example i.e. server virtualization. In this virtualization we use a software layer called hypervisor which we then integrate with our base i.e. the hardware, so for any guest user it would appear as if that person is using the actual hardware but in turn, he will be working on the hypervisor. This hypervisor also helps us in creating different systems on a single hardware and they all can work parallel in various operating systems.

Now that we have understood what is a virtualization and its significant role in our day to day activities, let us dig a bit deeper and look at what are the different ways/types we can do virtualization 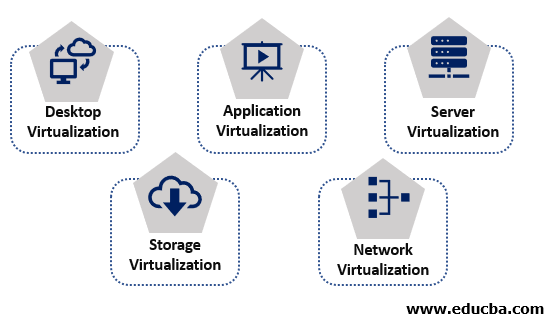 This type of virtualization also known as VDI (virtual desktop infrastructure) was in our operating system will be running like a virtual machine on a server along with other VD (virtual desktops). For the processing of these VD’s, we will be doing it in a data center with the help of physical servers. The multiple applications and operating systems that are being used by the end-user will be cached in the memory on the server. As of today couple of major virtualization vendors are Citrix and VMware Horizon, these vendors provide a very smooth performance on the virtual machine that the end-user would not realize he is working in one, and they are the widely used applications in the current industry.

In this type of virtualization we use software to make our application as a single executable file that can be run anywhere, this software will be segregated from our OS and we will run it in a sandbox. Application virtualization can further be divided into two categories they are:

A few examples of application virtualization are Xenapp, VM Thinapp, and Zenworks, etc.

In this type of virtualization, we aim to virtualize the server that we use, that is we will be running multiple VM’s (virtual machines) in a single physical server. Here the resource form this physical server will be shared among all the virtual servers that are being used. Some of the resources which are being shared majorly are CPU, Storage, ROM, and RAM, etc and we will be sharing them on the hypervisor (a layer of software between the base hardware and the virtual machines). These virtual machines are isolated and independent of each other and they are completely capable of running the different OS in different machines. Some of the competitive vendors that are available in the market who do this server virtualization are vsphere (VMware), Xenserver (Citrix) and Hyper-V (Microsoft), etc.

Storage virtualization basically combines/pools the storage that is available in various devices and keeps it as single storage. Identification of the available storage is done by leveraging the software and aggregates them to use it in a virtual system/environment. The software actually constantly monitors the various I/O requests from any virtual/physical system and it intercepts them and sends it to the appropriate location where the combined storages are maintained in a virtual environment. This technique of storage virtualization actually helps the administrator for any recovery or backup or archival of data in an effective and efficient manner by taking comparatively less time than the usual. Some of the advantages of this kind of virtualization are:

Here we will be using software to decouple the virtual network form the baseline and it will perform the functionality of a network. After we have started using this network virtualization then we will be using the physical network for the sole purpose to forward the packets and we will be doing the management work using the software. We basically collect the entire network and with the help of the routing table we will manage it in real-time and they are also independent of each other. One example of network virtualization is that VPN i.e. virtual private network with the help of this anybody can create a network for them virtually in the internet. If we are providing network virtualization (NV) to one system we will call it internal and if we are combining them in a virtual network we call it as external NV.

In this article, we did have an interesting look at what is virtualization, its functionality, and its types. It is also important for one to understand that our current market industry and our everyday day completely run on the virtual world. So it is necessary for us to have a good idea about it.

This is a guide to Types of Virtualization. Here we discuss the introduction, functionality and different types of virtualization in detail way. You may also look at the following articles to learn more –