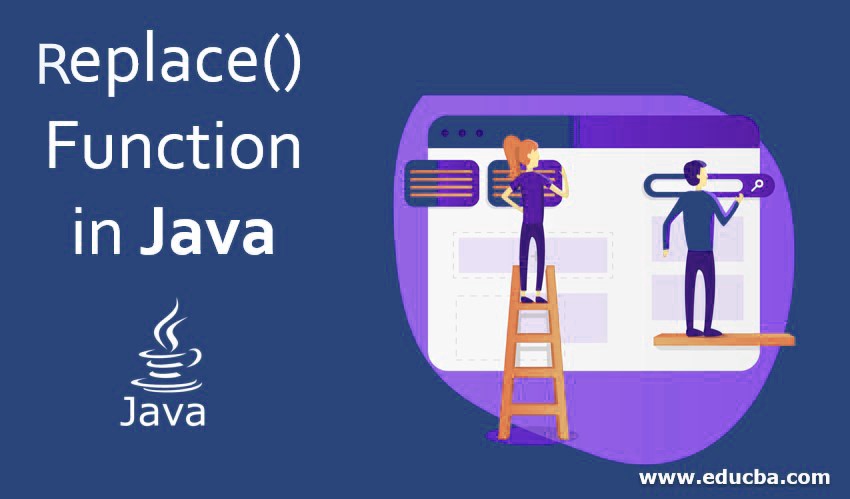 Introduction to Replace() Function in Java

There are some other variants of replace function as well like “replaceAll()”, “replaceFirst()” which use the regular expression to manipulate the string.

Here this function has an access modifier “public” allowing it to be used by other functions as well. String type designated that this function will have a return type of “string”. The input parameters are passed in the form of two-character variables named “oldcharacter” and “newcharacter”. These variables will be used to scan the character to be replaced and then logic in the function will work to replace this character with the new one sourcing from the “newcharacter” variable.

Return Value: This function returns a string with the old characters replaced with the new ones.

How Replace() Function Works in Java?

The internal code logic of replace () function is given below with an explanation.

Note: This is not a running code. It is a code logic on which replace function works.

Here the function named “replacefunction” is actually “replac” function in Java. This function will work only when the character to be replaced is different than the character which should be placed in the place of replaced value. In case in string “abcdecd”, “d’ should be replaced by “d” itself in that case the same string will be outputted rather than entering into unnecessary logic of this function. Once the control enters into a function then all necessary checks are done to find out the value which needs to change.

Below is the core logic to replace the particular character with a new one. Here while loops designate that till we do not reach the end of the string we have to keep control in this loop. Here variable to be replaced which is being carried forward from the start is parked in character variable “c”. The conditional statement is put then where if character “c” matched with the “oldcharacter” variable then the value of “c” should be changed with “newcharacter” otherwise “c” should be retained as it is.

Example of Replace() Function in Java

The below example demonstrates the working of replace function in JAVA language. It has got two parameters as input and returns a changed string after replacing the targeted character or character sequence from the input string.

public class test {
public static void main(String args[]) {
// In the below line a new string Str_new is being created. For this to implement a new string object is being introduced.
String Str_new = new String("dEmonsRating the functionality of REplacE function");
// Below code explains the use of replace function. This function returns a string as a return value.
// This returned value is being captured in print statement.
System.out.print("This is string after replacing all Rs with Ks : " );
System.out.println(Str_new.replace('R', 'K'));
// The below line will work the same as previous code line only with small changes made with input parametrs provided to this function.
System.out.print("This is string after replacing all E with U : " );
System.out.println(Str_new.replace('E', 'U'));
}
}

Hence replace() function is very useful when we need a clean way to replace anything from another in a string. It is extensively used in JAVA programming language for string manipulation purposes during logic building.

This is a guide to Replace() Function in Java. Here we discuss how to replace() function works in Java along with example and code implementation. You can also go through our other related articles to learn more –