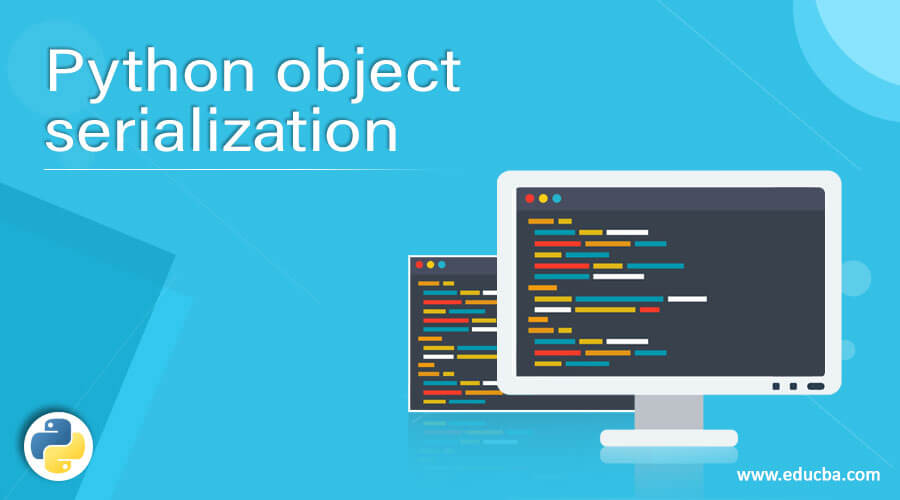 Python object serialization, when we define in the context of data storing and unpacking, is considered as a method. In which we can convert/translate a python data object into a byte format. This byte format is storable (either as a file or in a buffer memory). On top of that, you will be able to transmit, reformat, or restore it later as well via sockets. In serialization, a module named pickle from python allows you to serialize the python object, which can also be stored as a file to any location or inside the buffer memory for a temporary period.

Pickle to Serialize a python object

Pickle is a module developed under python which can convert a python object into a byte system string (which usually cannot be read by the user) which can later be saved as a file or into a buffer memory. Finally, it can also unpack the byte strings into the original python objects. There are two different methods for serialization and deserialization under the pickle module, as mentioned below:

You can check this by running the following piece of code in python:

The output for this code is as shown below, which gives you the protocol values for HIGHEST and DEFAULT protocol, respectively.

The HIGHEST and DEFAULT Protocol Values

Let us see some examples associated with object serialization, de-serialization in Python programming:

1. The pickle.dump() Method to Serialize a Python Object

Here, we have created a dictionary named “dic1”, which contains the information about the user accessing the web portal and the amount of purchase he has made.

We have defined a “file” object as well. This object will allow us to store the serialized bytes into a text file at a working directory with the name “serialized”.See the output below:

Here, no output is visible as the file is created and stored in the working directory. We Can see it as shown below: 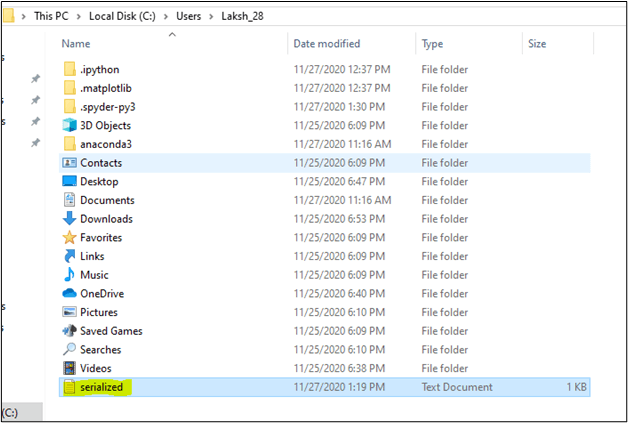 We can open this file in any text editor to see the output.

2. The pickle.load() Method to De-serialize the bytes into Python Object

The pickle.load() function will take a file that has serialized the python object into bytes and then convert it into the original python object. See the code below for a better realization.

Here, we have used the same file object we have created a serialization in the previous example. Then we have used the pickle.load() to read that file and convert it into the original python object that is a dictionary. See the output as shown below:

You can see the original dictionary that you get as an output in the console, as shown above, with the user information.

3. The pickle.dumps() Method to Serialize the Python Object

Now, we will use the pickle.dumps() method. Which allows us to serialize a python object into a byte-sized text object. However, the difference here is, this method doesn’t allow us to store the result into a file; rather, it allows the result to print out directly in the console. See an example below:

Here, we have used pickle.dumps() method with DEFAULT_PROTOCOL value to convert the object into bytes. See the output as shown below:

4. The pickle.loads() Method to convert open bytes into python objects

Let us do a reverse; we will use the byte code above to get the original dictionary under python using pickle.loads() method.

This code will generate the original dictionary with its components. See the output screenshot as shown below:

We will wrap this article here, but not before some conclusion points.

This is a guide to Python object serialization. Here we discuss the two different methods for serialization and deserialization under the pickle module. You may also look at the following articles to learn more –