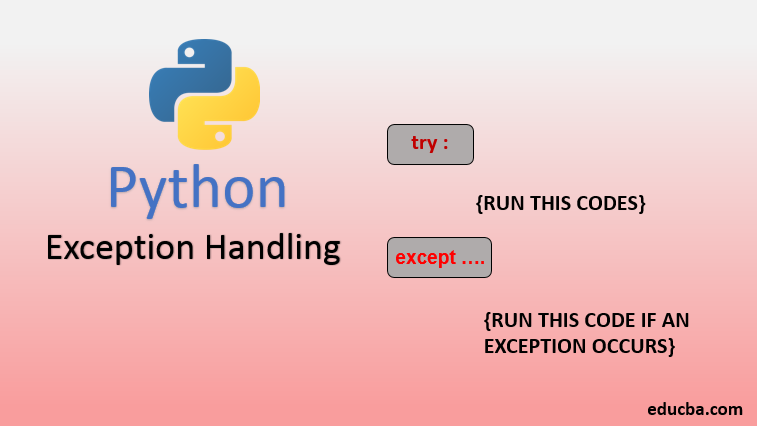 A mechanism provided by Python, like most other object-oriented programming languages, to deal with all possible errors that may generate during the execution of a program code, with the mechanism providing a robust and effective set of methods with every error being handled in the most appropriate manner, technically being facilitated by keywords such as try and except, is termed as Python Exception Handling.

Exception: All exceptions base class

StopIteration: when no object is pointed by the next method of the iterator this exception is raised

SystemExit: Hoisted through the sys.exit() function.

StandardError: Except StopIteration and SystemExit this acts as the base class for all built-in functions.

ArithmeticError: For all the numeric errors these exceptions act as the base class.

OverflowError: For a numeric type if the calculation exceeds the maximum possible value then this error is raised.

FloatingPointError: Failure of a float operation kicks this error

ZeroDivisionError: Raised when a divide by zero situation occurs in the code

AssertionError: When the assert statement fails then this error is triggered

AttributeError: When an assignment or an attribute reference fails then it raises this error

EOFErroR: Raised when no more input from any of the function and end of file is reached

KeyboardInterrupt: Raised when there is an interrupt to the program execution

LookupError: All lookup errors fall under this base class

IndexError: Raised when index not found

KeyError: Raised when the dictionary does not hold the mentioned key value

NameError: Raised for a missing identifier locally or globally in the program

UnboundLocalError: Raised when using a local variable without any value being assigned to it.

EnvironmentError: Base class for environment-oriented errors which occur outside python

IOError: Raised while an input/ output process be unsuccessful

SyntaxError: All python syntax oriented errors are handled by this exception

IndentationError: Improper indentation will lead to this kind of errors

SystemError: This occurs at a situation when the interpreter doesn’t work as expected, but this error does not make the python program to go out of execution

SystemExit: When sys.exit() function is used by the python interpreter then it leads to this exception. this makes the code abnormally terminate when not been handled properly.

TypeError: When an operation is invalid for a particular data type then this error is prompted

ValueError: When a function holds a valid type argument but an improper value is been specified for that type argument

RuntimeError: If any of the above categories are not satisfied then this error is raised

NotImplementedError: Raised while a nonfigurative method that wants to be put into practice in an inherited class is not in fact implemented. Put in order and managing these exceptions is a process carried out by the except block which is inserted at the end of every try block.

Below we will discuss the Exception Handling Process in Python

1. Except clause with Multiple Exceptions

try: Code block1
except(Exception1[, Exception2[,...ExceptionN]]]):
Executes when one among the exception happens
else: Executed when no exception is raised

2. Except clause with no exception

All the exceptions triggered from the try block are capable of being processed here.

try:
Code block1
except:
Executes if any type of exception happens
else:
If there is no exception then execute this block

3. Except clause with Arguments

Every programming language holds the process of raising an exception whenever it faces an unexpected set of situations and python is one among them which produces profound techniques for handling these exceptions which makes it a strong base meted programming language.

This has been a guide to Python Exception Handling. Here we discuss the standard exception list and process along with Syntax. You can also go through our other suggested articles to learn more –