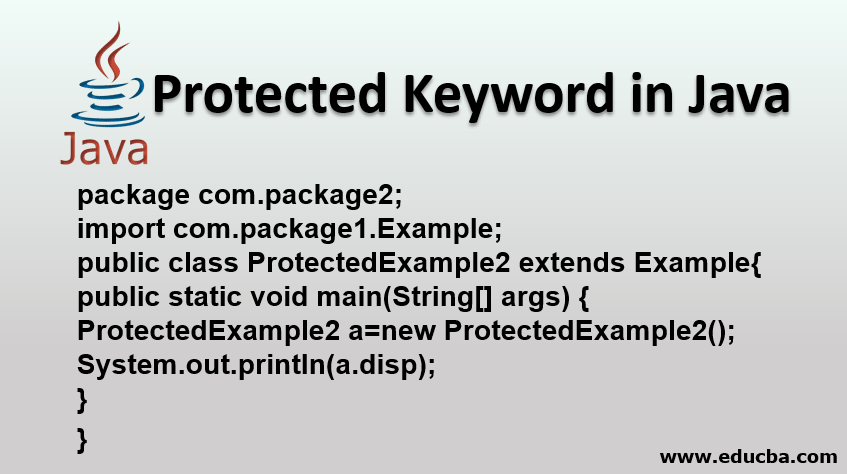 Overview of Protected Keyword in Java

Once a variable or a method is marked as protected, it can only be accessed by the below methods:

Protected keywords are like a combination of both public and private keywords since they were introduced to be able to access the variables outside the class (which is not possible in case of private keywords) but also maintaining that only certain methods can inherit the same.

Protected keywords are declared with the keyword prefixed to it as “protected”. We first declare the protected keyword in one of the class called “MyClass” as below:

Here the class “SubClass” extends “MyClass” and hence the protected keyword can be used here by creating an object of SubClass and by calling the variables.

Some of the restrictions on using protected keywords are:

Let us go through some examples where we can understand the concept of protected keywords better.

Here we try to call the keyword from the parent class of “package1”. “ProtectedExample2” is created in “package2” and the keyword “disp” is called here. But the code will not be able to access the keyword since the child class has not inherited its value from the main class and will throw an exception as shown.

In this example, we try to access the class “ProtectedExample5” which is protected. This causes a compilation error.

3. Displaying protected keyword from the same package but different class

5. Accessing a protected class by overriding to sub-class

Here the class is declared as protected inside the inherited class “Example5”. Also, a protected class called “Example” is declared outside the function but in the same package. When an object of “Example5” is created and the protected class “disp()” is called, we can observe that the overridden method is called instead of the outside class. This is because we shall not be able to import “com.package1” and it’s class “Example” since it is not visible and causes a compilation error.

The importance of protected keyword in java are:

As shown in the above examples, we choose protected keywords depending on the access level we require at the code level. They help greatly in cases where the same variable or class needs to be accessed from other inherited methods in the program. A parent-child relationship is always present between the parent class and its sub-classes which are using the protected keyword.

This is a guide to Protected Keywords in Java. Here we discuss the overview, different examples of protected keywords in java along with importance. You may also look at the following articles to learn more –