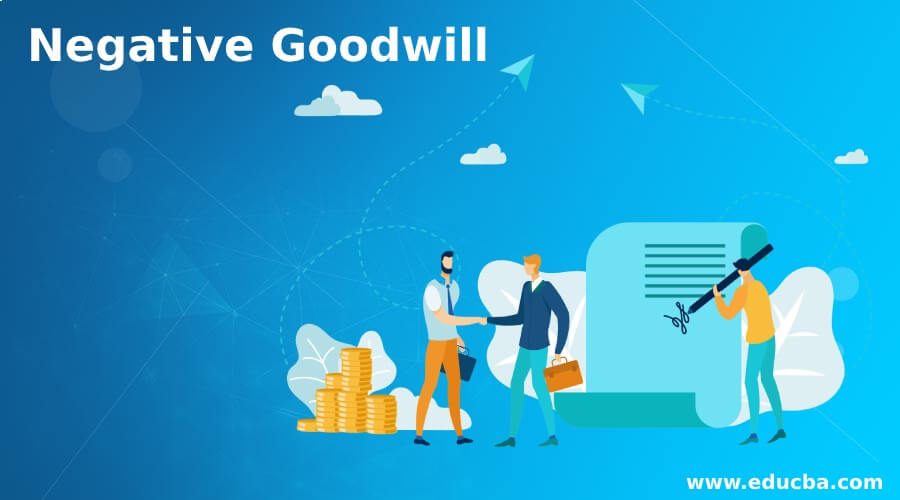 Negative goodwill can be defined as a term used in case where one company purchases or acquires another company(usually an bankrupt or a distressed company which is in immediate need of cash) at a price valuation which is lower than the fair market value of business and can be mathematically referred to as the difference in between sum value of money paid for acquisition reduced by fair market value of acquired company’s net assets.

Due to market conditions and huge debts, Mercedes decided to sell its business to Audi and wind up its business operation in purchase consideration of million $35,00,000 the asset allocation was as follows –

Net Assets Value is calculated using the formula given below:

Therefore, difference of $5,00,000 will be recorded as negative goodwill.

Different accounting GAAPs provide different treatments of bargain purchase value i.e. negative goodwill value. Under some GAAPs, the difference of net assets acquired and purchase price is allocated to toe cost of fixed assets(long term assets) except some assets. The value remaining after such allocation is been transferred to profit and loss A/c as an extraordinary gain. However, some GAAPs, directly recognize this difference in P&L A/c while other may recognize it as a capital gain which will be added to the capital reserve balance.

Negative Goodwill in the Balance Sheet

Here we discuss the negative goodwill in the balance sheet:

From the Acquiring Company’s Perspective

As per the prevailing US GAAP accounting guidelines, goodwill is recorded as an asset in the balance sheet of acquiring company whereas negative goodwill does not find place in Balance sheet as it gets reduced from the value of plant, property and equipment, intangible property value acquired. However, in case if after value of PPE and intangibles becomes zero, it gets recognized as an extraordinary gain in income statement.Accordingly, negative goodwill does not find any place balance sheet.

From the Sellers Prospective

Some of the advantages are:

Negative goodwill occurs when a firm is acquired at a bargained price usually when the owner of the company is in dire need of cash and thus is willing to sell its assets at the readily available value being offered irrespective of its original fair value in the market. Negative goodwill remains fruitful for the buyer and is recorded in the income statement of the buyer.

This is a guide to Negative Goodwill. Here we also discuss the definition and accounting for negative goodwill along with examples and advantages. You may also have a look at the following articles to learn more –