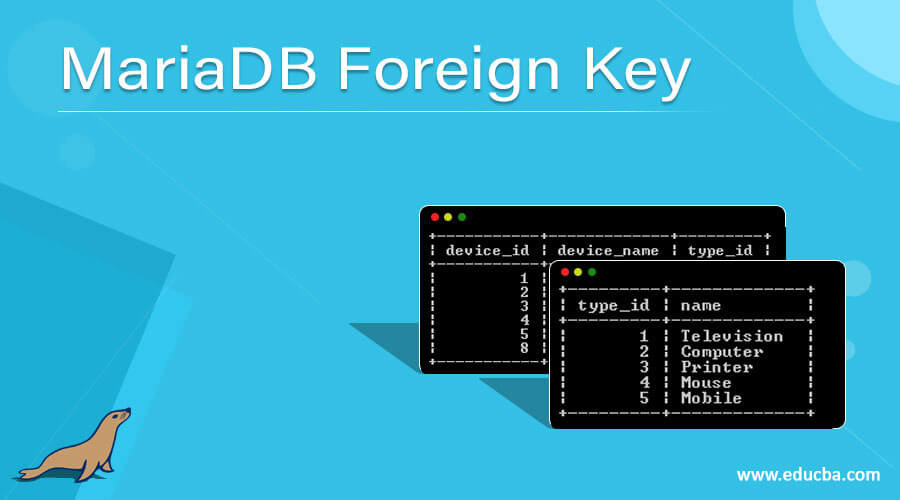 In above syntax first, we use create table statement after that we constraint name to specify the foreign key name, if we skip this constraint the MariaDB will use the default generated name. In the next part foreign key followed by a foreign name with a list of column names separated by a comma within parentheses. After that, we specify the parent name with the column list after the reference keyword as shown above syntax. Finally, we determine how foreign key maintains referential integrity between two tables that is the child and parent table by using on delete and on update clauses.

How does foreign key work in MariaDB?

On delete no action: This is the default parameter in foreign keys. If any existing referencing key is deleted then the transaction fails at the end of query. The key will be updated by using an update clause.

On update no action: This is a default parameter in foreign key. If any existing key is updated from the parent table then the transaction fails at the end of the query. The foreign key we can delete by using the delete clause.

Let’s see how foreign keys work in MariaDB with help of different examples as follows.

There are two ways to create foreign keys or we can say to add foreign in the table as follows.

1. Create foreign keys at the time of table creation.

In the above example, we use a create table statement. Here we created table name as device_type with a different attributes such as device_id, device_name, and type_id with different data types as well as here we define foreign key name as fk_de_type as shown in above statement type_id is a reference of device table that means (type_id). The result of the above statement we illustrate by using the following snapshot.

Now we insert some records into the device table by using the following statement as follows.

With the help of a statement, we inserted the above records into the device. The result of the above statement we illustrate by using the following snapshot.

Now insert some record into the device_type table by using the following statement as follows.

With the help of a statement, we inserted the above records into the device_type table. The result of the above statement we illustrate by using the following snapshot.

We can perform different operations with the help of restrict reference, null reference, and cascade reference option.

2. Second way to create foreign keys is by using the alter table command.

In this method, we can use the alter table command to add foreign keys into the table.

Rules and regulation for using the foreign key

Set Null: When we deleted rows from parent table then corresponding rows from child table are null.

Restrict: if reference rows is updated from parent table then referencing rows from child table is restricted.

No action: It works same as restrict function as mentioned above.

This is a guide to MariaDB Foreign Key. Here we discuss the definition, How does foreign key work in MariaDB? and examples. You may also have a look at the following articles to learn more –