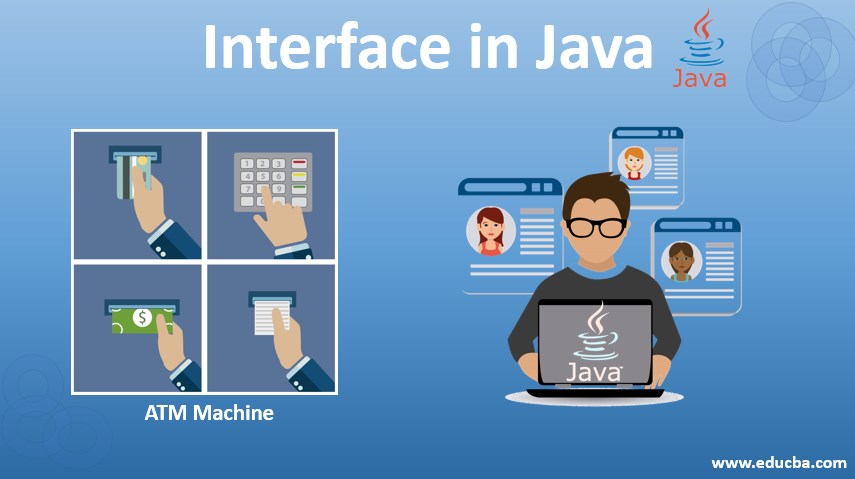 Introduction to Interface in Java

The Interface is a medium to interact between user and system devices. For example, in our real life, if we consider the interface to be given as an example is the air condition, bike, ATM machine, etc. Similarly, in Java, Interface also plays the same role; it is considered as an interactive medium between the system and the end-user. However, the main aim of the interface in java is to achieve 100% abstraction by hiding actual implementation to the user and thus making applications a bit user-friendly. Therefore, it basically comprises of static, abstract, and final methods.

There are three main reasons why do we need it.

How does the interface work in Java?

Therefore, as mentioned earlier with a real-life example, an interface in java is nothing but a contract between the client-side and service providers. The abstract class consists of both abstract class as well as normal methods or non-abstract classes, but the case is not the same with the interface. It has really helped the main framework of applications make them secured and came a lot to become user-friendly. It maintains IS-A-Relationship, which also helps make the inheritance and extend between classes possible, thus providing visibility.

The nested interface is yet another type of interface that we can suggest by its name as an interface within an interface and comes as a part of nested classes as well.

How to Declare Interface in Java?

Note: Whether we are declaring or not, every method by default is public or abstract.

Implementation of Interface in Java

Implementation of an interface in java is performed by using implements keywords.

Therefore, if a class implements an interface mandatorily, we should provide an implementation for every method of that interface; otherwise, that class must be declared as abstract. If an interface is getting implemented, it must declare the interface as public; otherwise, it will throw an error saying compile-time error.

Then there is one more essential aspect to be followed with interface declaration and implementation.

Note: At a time, a class can implement any number of interfaces simultaneously and can extend only one class.

Examples to Implement Interface in Java

Following are the examples of implementing an interface in java with different scenarios:

The above output tries to prove the point that the interface must be implemented by another class using the implements keyword rather than using the extends keyword.

One interface can extend another interface also once a class can implement an interface.

Many times, people get confused between abstract class and interface, but they are different. An interface contains only an abstract method, but java 8 can accommodate both default and static methods also which is like add-on. The interface gives its 100% and can achieve full abstraction, but this is not the case with the abstract class, which provides partial abstraction only.

This is a guide to Interface in Java. Here we discuss the introduction and how does the interface work in java, along with examples to implement an interface. You may also look at the following articles to learn more –