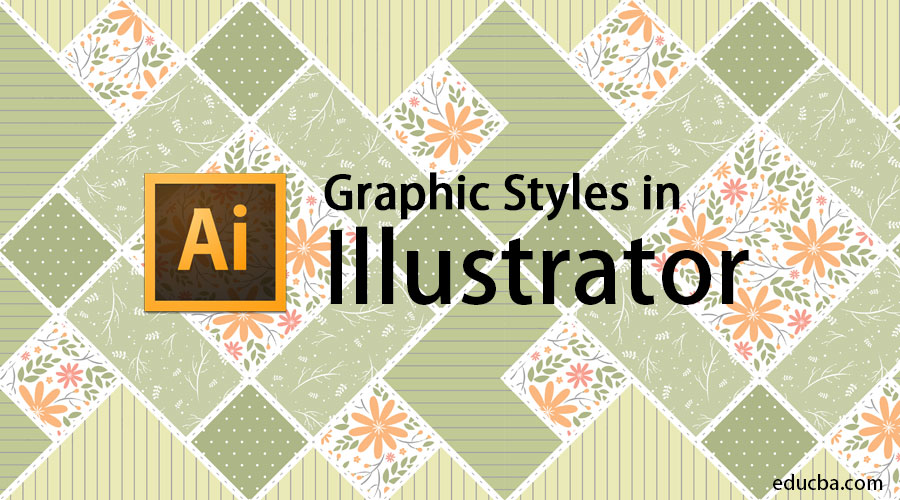 Adobe Illustrator is considered to be the powerhouse of effects and editing styles. The program is used widely by most of the editors and graphic designers. Generally, all the designers working on 2D projects and artworks use Adobe Illustrator. This program is one of its kind vector graphics software that is loaded with a robust toolset and enormous functions. Being a designer requires a lot of patience and time to create desired projects and outputs. In this topic, we are going to learn about Graphic Styles in Illustrator.

A designer is always looking for an alternative way to create any artwork or design that can save time and give efficient results as well. Adobe Illustrator is the perfect program to experiment with different styles and alternatives used for gaining desired results. One such feature in Adobe Illustrator is the use of Graphic Styles within the program. These graphic styles can either be created by the user or are also available pre-installed in the software. The basic use of Graphic styles is to save the time of the user and a lot of manual work can be saved.

A Graphic Style once created can be used infinite times by the user on any text or object specifically. The Graphic Styles are a set of properties that can be reused numerous times. These Styles helps in modifying the appearance and physical factors of any text or object with just a single click. These Graphic styles prove to be useful and conserve the time and hard work of the designer.

How to Create a Graphic Style?

Below is the step by step procedure that will help us to create a new graphic style in Adobe Illustrator.

Open A New Document Of A4 Size 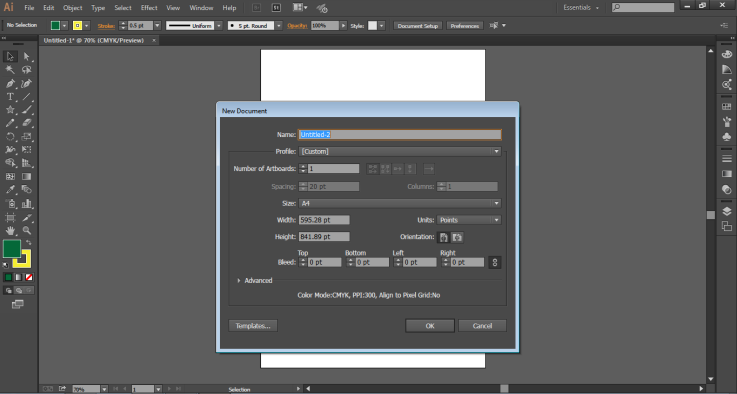 Go to Windows Panel and click on Graphic Styles to see the Dialog Box. 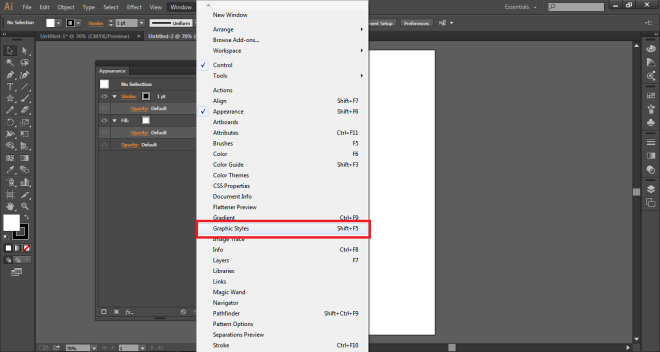 Next, Go to Windows Panel and click on Appearance to see the Dialog Box. 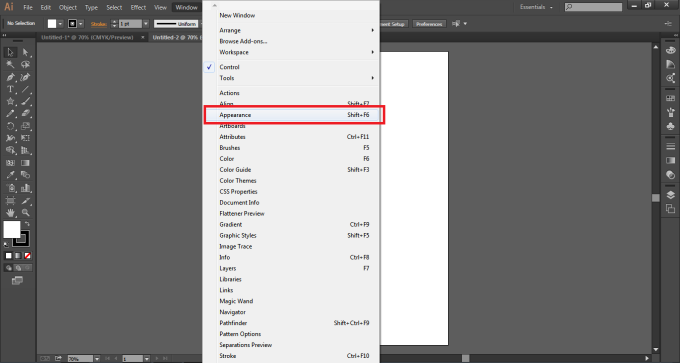 Now, when we create a Graphic style, the style is created and modified in the Appearance Panel while it is saved in the Graphic Style panel. Now, using the text tool write EDUCATION on the page. 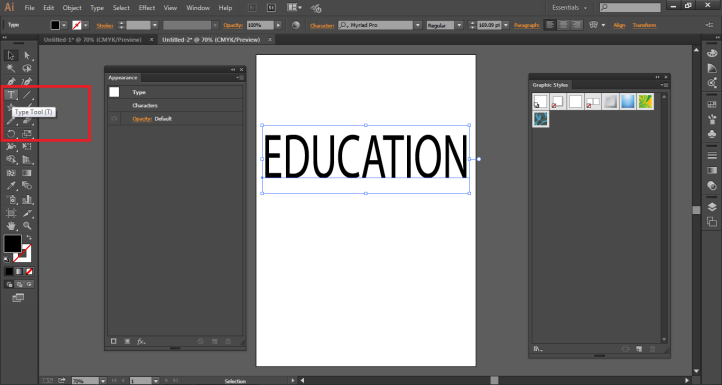 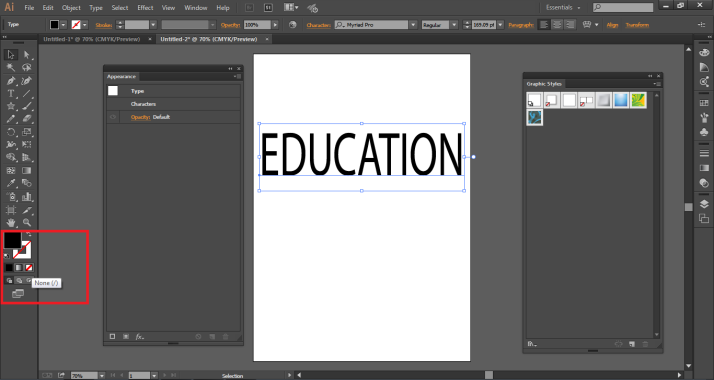 You will see the result below. 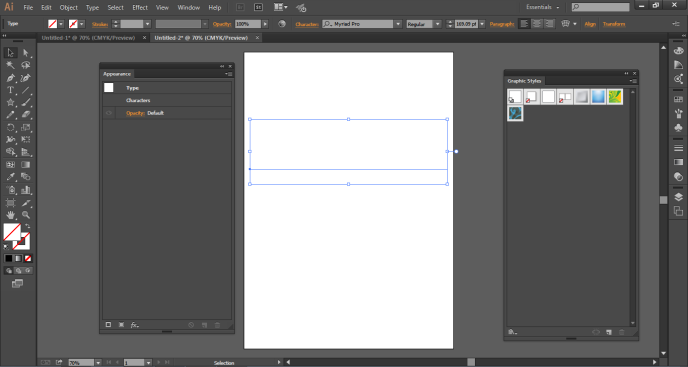 Go to the Appearance Panel and click on NEW FILL as shown in the figure. 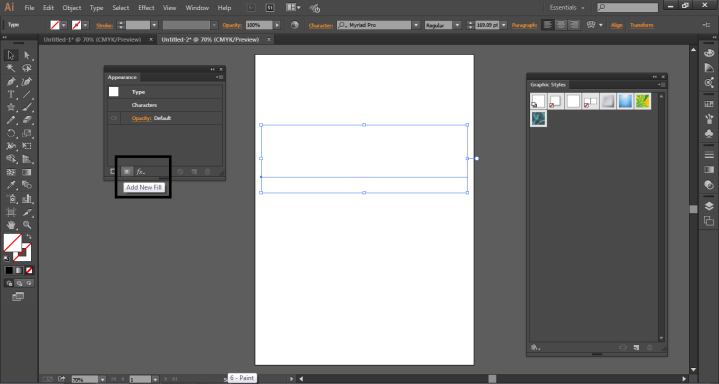 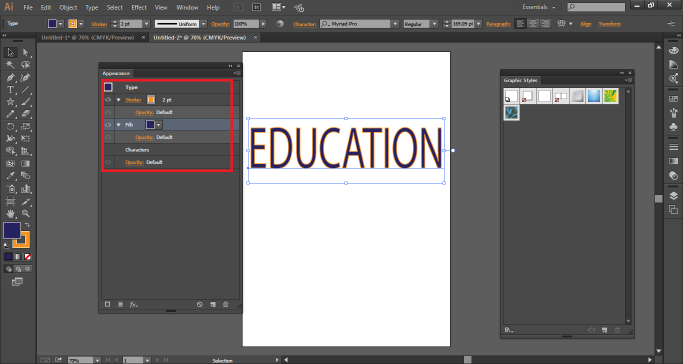 Now, to add more effects to this style click on the ADD NEW EFFECT option from the Appearance Panel. 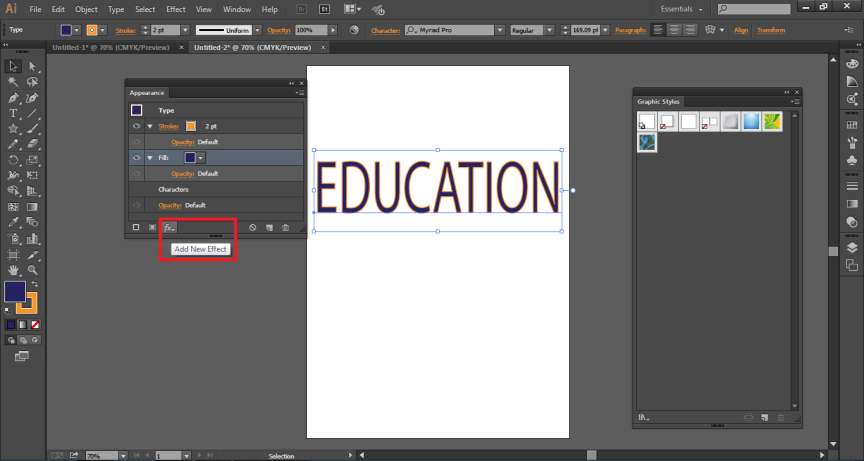 Select Transform from Distort and Transform Option. This option will create a number of copies of the same text. 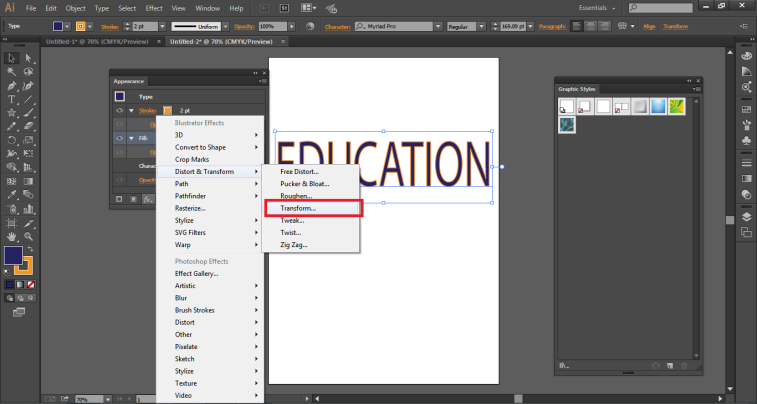 A dialog box will appear, in the Move Option write 0.5 Horizontal and 0.5 Vertical and provide the count for COPIES as 10. Click on preview as shown in the figure below. 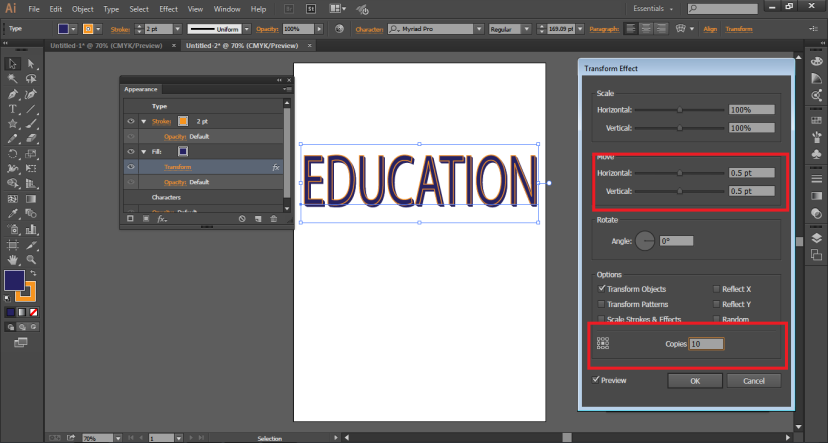 Similarly, any effect can be added to the text.

Now, this text can be made as a graphic style just by dragging the text into the GRAPHIC STYLE PANEL as shown in the figure. 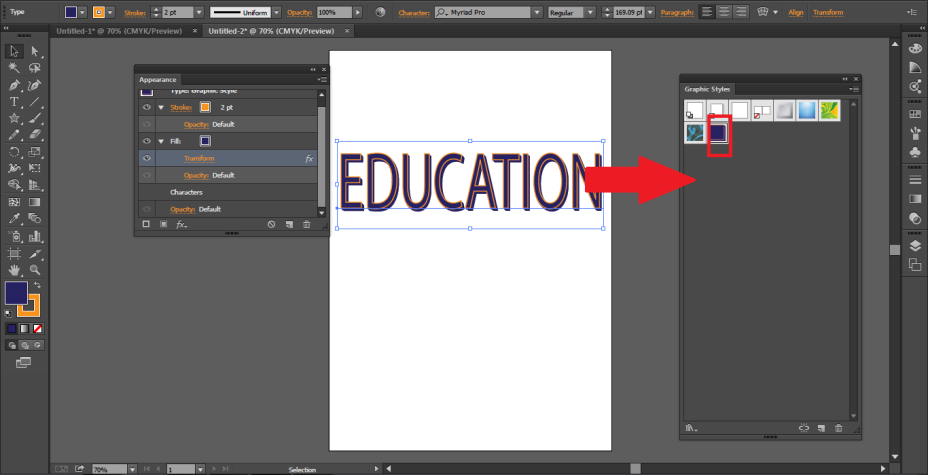 To check the graphic style, create another text and delete the older one. This time write down HELLO on the page. 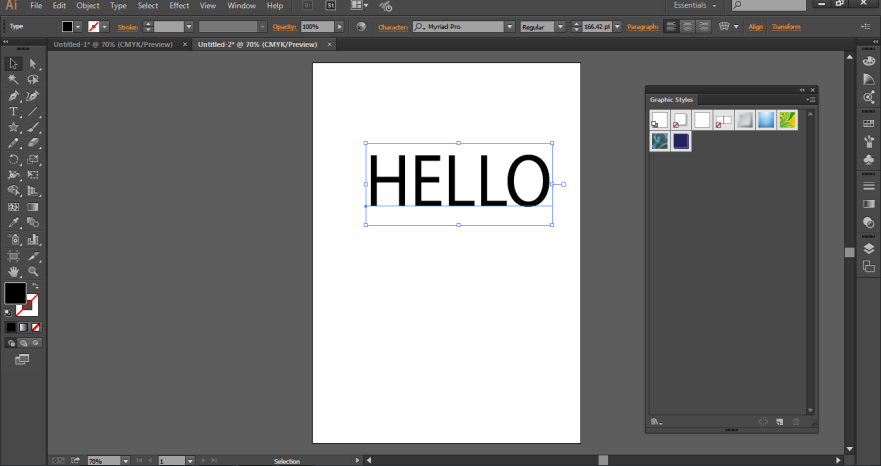 From the Graphic Style Menu, drag the recent created Style on this text. You will see that the HELLO text has been modified just like the EDUCATION text. 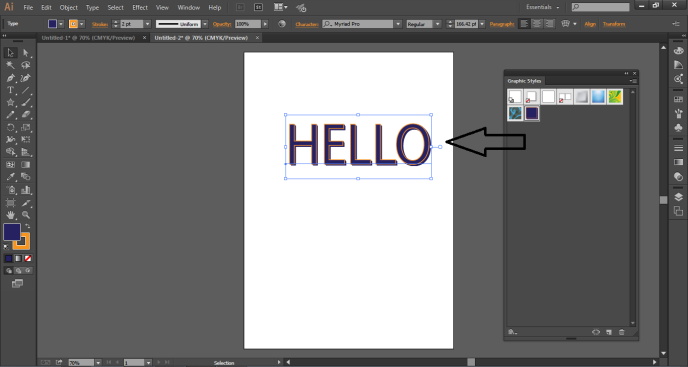 If you are using Graphic Styles for any TEXT or TYPE, you can click on the corner button of the Graphic Style menu and select USE TEXT FOR PREVIEW as shown in the figure.

Example to Apply Graphic Style to The Object 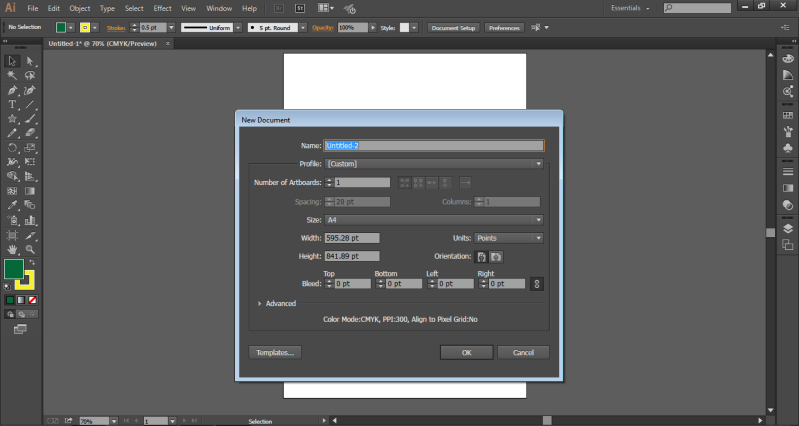 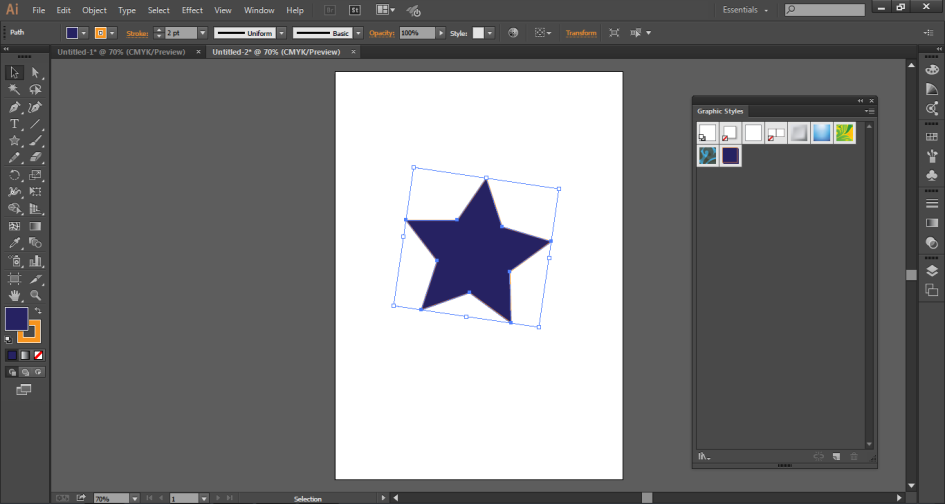 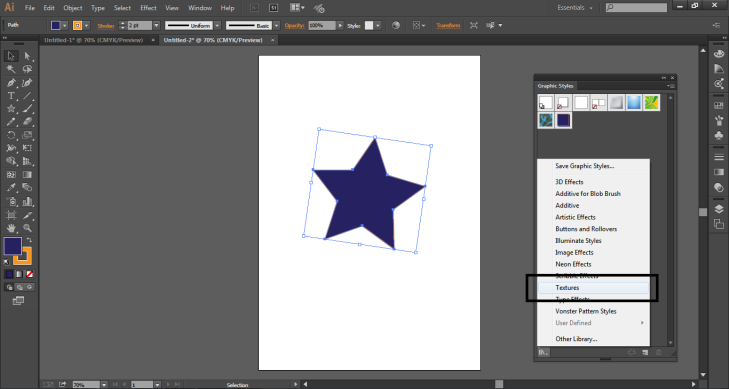 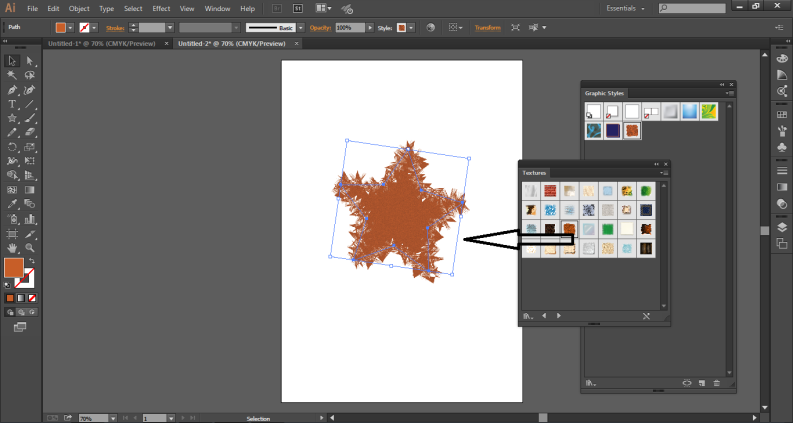 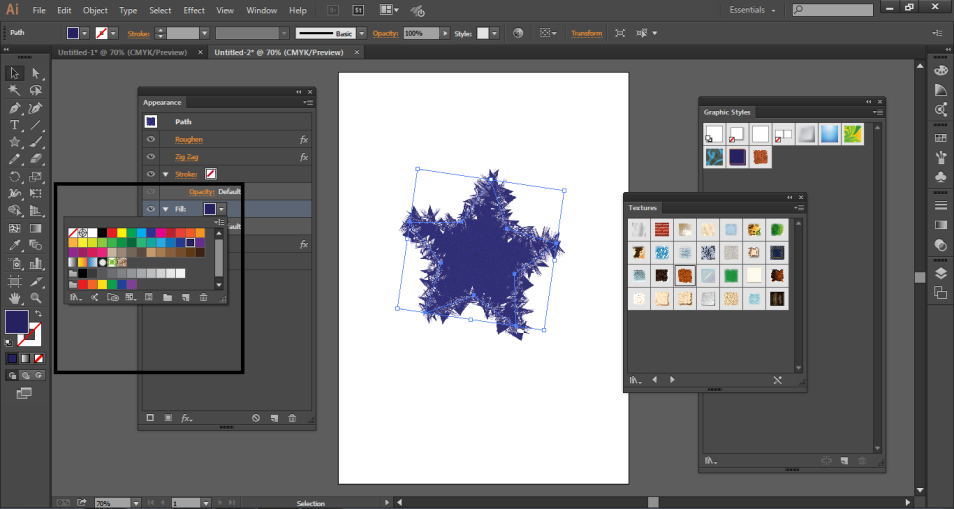 The Graphic Styles are very easy to use and understand while making working on the program easier as well. We can also import our Libraries to Graphic Style and create stunning artworks and effects.

This is a guide to Graphic Styles in Illustrator. Here we discuss How to Create a Graphic Style with the help of step by step procedure. You may also look at the following article to learn more –