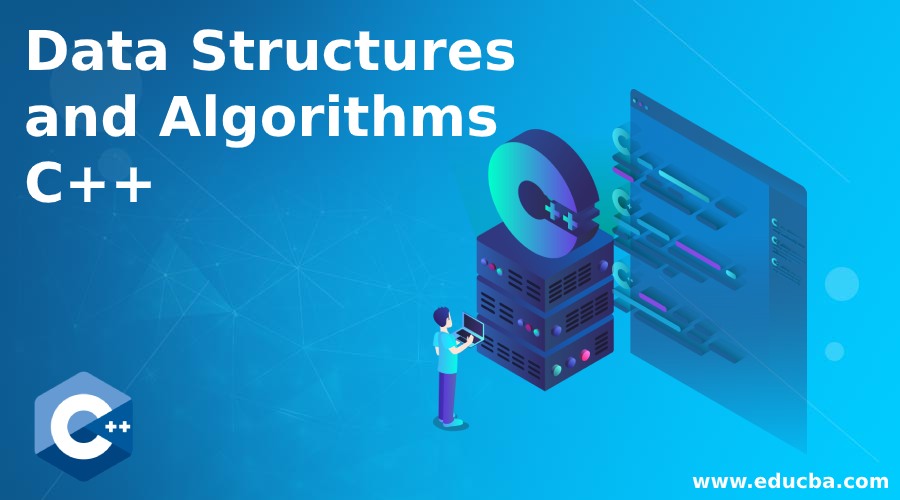 Data Structures and Algorithms C++ – means arranging or organizing the elements in a particular way. When we say we have to arrange elements, those elements can be organized in different forms. For example, socks can be arranged in various different ways. You can just keep it in your cupboard all messed up. Or you can keep it neatly folded. The best way can be folding and arranging them color wise. So for searching a particular pair of socks, the third arrangement is perfect.

The logical or mathematical model of a particular organization of data.

It is a particular way of organizing data in a computer so that it can be used.

Let’s discuss this one by one:

Array is a simplest type of data structures and algorithms C++. The array is defined as a Fix-size sequential collection of data elements of the same data type. E.g. a0=12, a1=21,a2=14,a3=15….We can represent one-dimensional array as shown in figure:

The lowest address corresponds to the first element

The highest address corresponds to the last element

We can combine declaration and initialization into a single statement as follows.

The disadvantage of the array are insertion and deletion of elements is slow as in ordered array and its fixed size storage.

List refers to a linear collection of items. A linked list is a series of connected nodes (data element) as shown in figure 3. Header node points to the first node of the list and the last node points to NULL indicated byÆ. As each node contains at least. 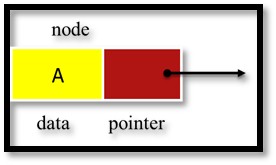 Linked List is represented in memory using two arrays. One array stores Information called info that is data to be stored and other stores next-pointer field called LINK that is an address of the next node.

An advantage of a linked list over an array:

Both an array and a linked list are representations of a list of items in memory. The important difference is the way in which the items are linked together. The main limitation of the array is element insertion into array and element deletion from the ordered array are difficult as rest elements have to be move. Insertion and deletion of elements from a linked list are very simple. 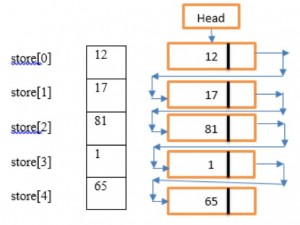 1. Singly linked list: contains only one linked field which holds the address of next node in the list and info filed which holds information to be stored.

2. Single Circular Linked List is a single list only but the last node of the list contains the address of the first node instead of null. That is content of head and next field of the last node are same.

4. Double Circular Linked List is doubly linked list but next field of the last node contains the address of the first node instead of null.

Implementation of linked list in C++ involves the creation of node, deletion of a node from the list, insertion of a newly created node into the list and searching a node with a particular key.

Code for creation of the node is given as follows:

Inserting a node into the list involves three cases 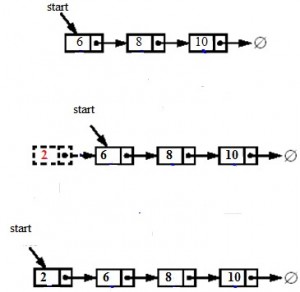 Code for inserting a node at the beginning:

3. Inserting a node at a given position involves the creation of new temp node, Then have to find the position of insertion of the newly created node.

Code for insertion of the node at a given a position: 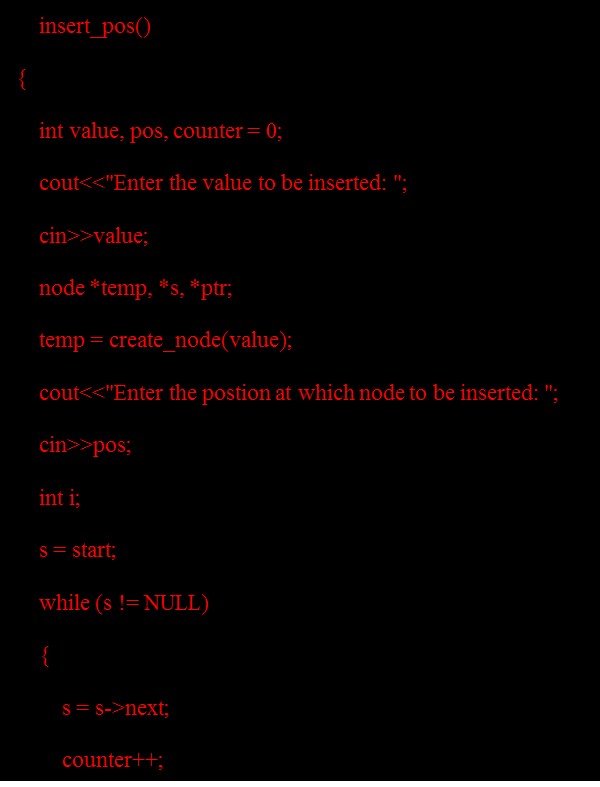 Traversing a node with a particular key (value) from a list will search a node from the list whose info will match with the key of a given node. The following C++ code will traverse a list. data structures and algorithms C++ 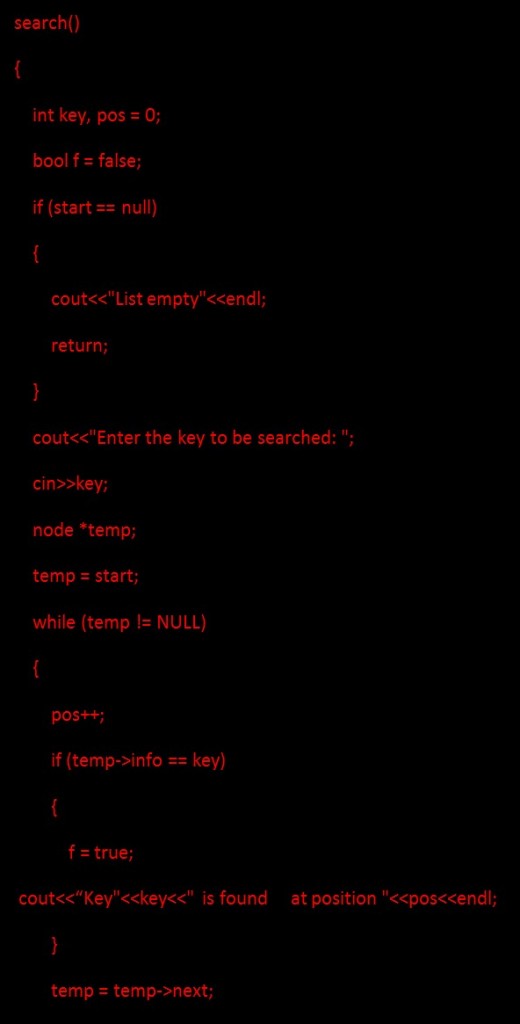 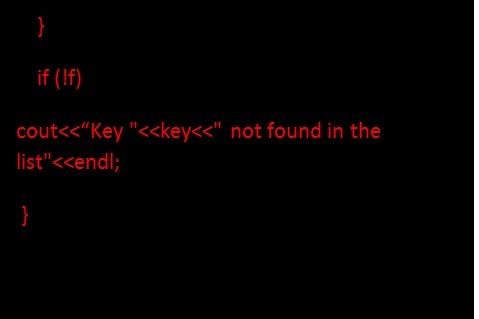 Stack uses LIFO principle means it works in Last in First Out order. That is the last element added to the stack is the first element of removal. So there are four basic operations that can be performed on the stack:

The following figure is an example of the stack where insertion into stack and removal from a stack of the item takes place from the top of the stack and nowhere else. 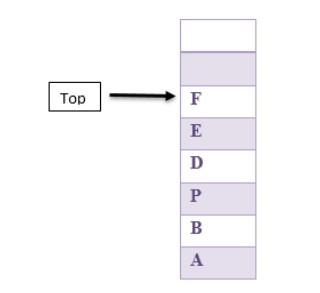 The condition resulting from trying to push an element onto a full stack.

The condition resulting from trying to pop an empty stack.

Here we have shown some push and pop operations on the stack. Suppose initially stack is empty then we added F, A, M, R, N. Then pop two times and push N, H, B, T, K, O, P. 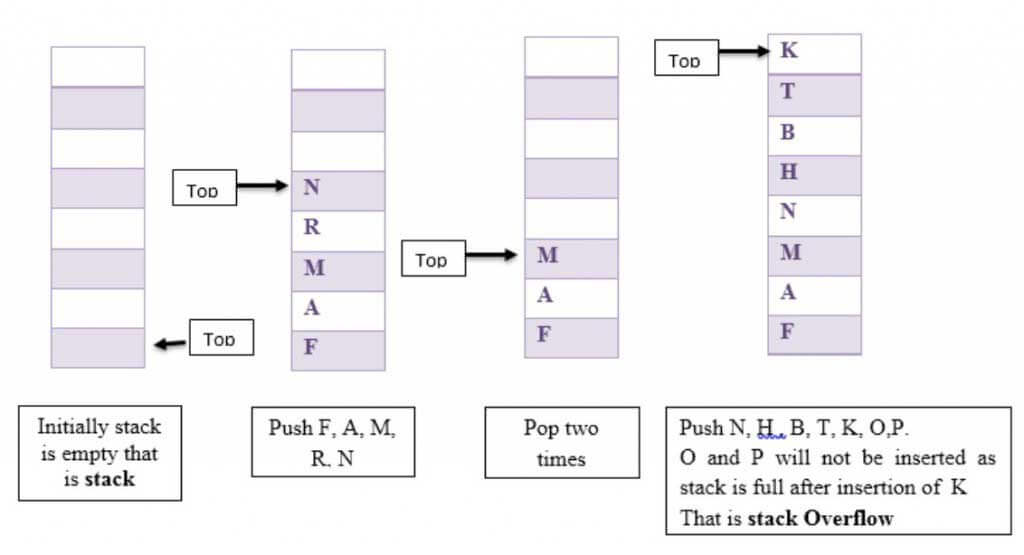 It can be implemented using an array or linked list both.

Following given code is depicts how the stack is implemented in C++ using Class. Here have defined one class named as a stack in which created an array named as a stick with dynamic size and two main functions push and pop.