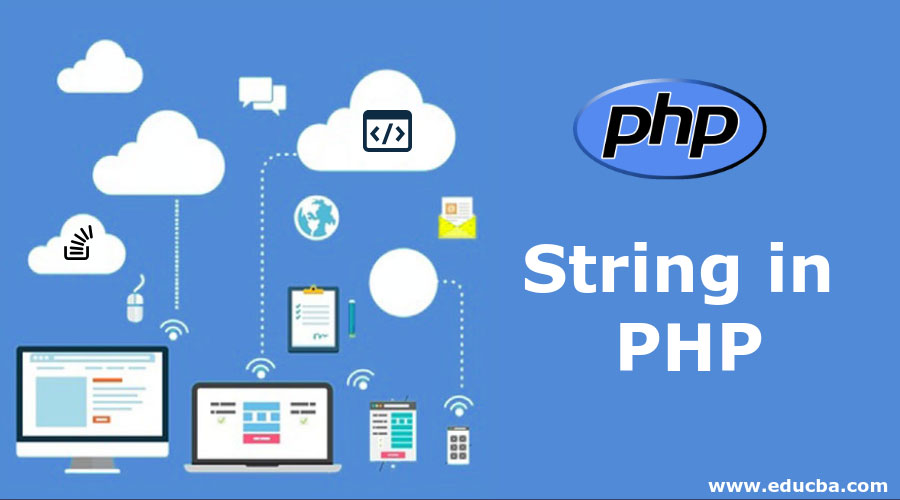 Introduction to String in PHP

Basically, we all know that a string is some collection of Characters. It is also one of the data types actually supported by the PHP programming language. Strings may contain alphanumeric characters. It can be created by the following ways listed:

How to declare String in PHP using various methods?

There are four different types of declaration.

Creating string/strings using the Single Quotes is the easiest and the simplest of creating a string. Now let’s have a look at the below-listed PHP syntax which is creating a simple string.

<?php
echo 'Login to the Page to view this page template';
?>

If this PHP Single Quote string is a part of the string value then we make it escape using the character of backslash. Check that code syntax below.

Mostly in the String creation in PHP language, Double Quotes will be used. Double Quotes String declaration method can create complex strings rather than the strings created using the single quotes.

We can also use variable names inside the double quotes so that variable values will be displayed as we want. Just have a look at the example of a double-quote declaration, variable declaration so that you will understand the concept of the String Declaration using the Double Quotes.

The above example will create a simple string variable “myname” with the value “Pavan Kumar Sake”. This string variable can now be used at any time in the PHP programming language as you want.

Here we will know what is Heredoc. The main methodology of Heredoc is to create the most complex strings in PHP when compared with the Double Quotes string declaration.

Heredoc will support all the features of the double-quotes. Along with that Heredoc will also allow you to create the string values without php string concatenation in more than one line. You can create as many lines with strings as you want. Multiple lines with strings can be created using the Heredoc method. One can even escape the Double Quotes inside the Heredoc method.

Let’s have an example of the PHP Heredoc method to create single/multiple string values.

<?php
$my_name = "Pavan Kumar Sake";
echo <<<EOT
When $my_name was a small boy,
He worked a lot and gained a lot
of knowledge yet he is simple like
the "small boy " in the childhood
EOT;
?>

<<<EOT is the string delimiter, EOT means End Of Text. EOT should be used/specified at the beginning of the string and also at the end. You can also use any variable declaration for <<<EOT.

Let us have a code example of Nowdoc method below:

<?php
$my_name = "Pavan Kumar Sake";
$my_variable = <<<'EOT'
When the big $my_name was a small boy,
He has done many funny things even this generation can’t imagine He is always like a "small boy "since from childhood
EOT;
echo $my_variable;
?>

Other than string declaration there are some string functions that will be very helpful in developing small web programs to the large projects. Kindly have a look at them. Also, know what is the output difference between the string double quote declaration and the single quote declaration.

“strtolower” converts all the string characters to the lowercase letters whereas “strtoupper” will convert them to upper case letters. “strlen” will provide the string length(characters count). “explode” function will convert strings into array variables. “substr” will return part of the string by using 3 basic parameters. “str_replace” will replace some string content using 3 basic arguments. “strpos” function will return the position of the specific string. “sha1” function returns hash code of the string. “md5” function provides md5 hash value for the string. Likewise, other strings function too.

This has been a guide to String in PHP. Here we discuss the introduction and how to declare String using various methods. You may also have a look at the following articles to learn more –