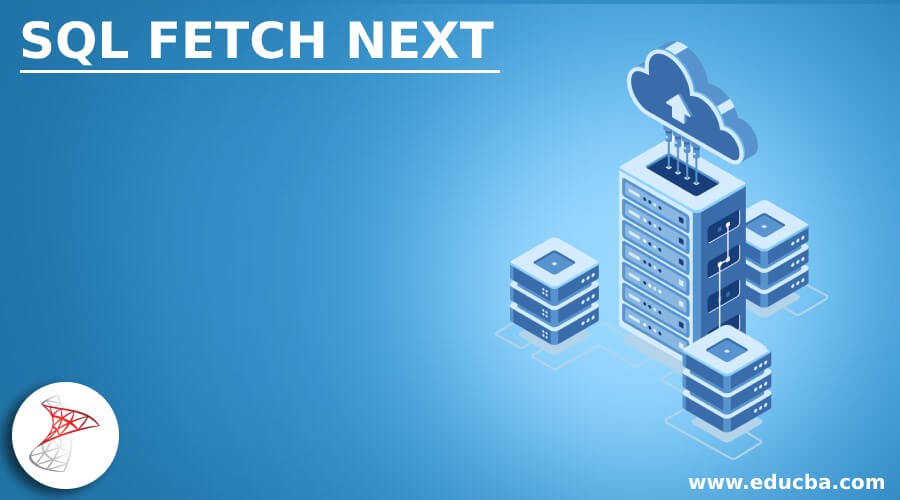 Introduction to SQL FETCH NEXT

FETCH is a command in standard query language (SQL) that is used to retrieve rows from a SELECT query based on the position of a cursor. When we use NEXT as direction in conjugation with FETCH, we get FETCH NEXT that retrieves the next single row. If there is no such row, then the command returns an empty result. We can use other directions such as PRIOR, FIRST, LAST, RELATIVE, ABSOLUTE along with FETCH command. All of them retrieve one single row in the specified direction. However, if we do not specify anything with the FETCH command, by default it will function as FETCH NEXT and will fetch the next row.

The basic syntax for using FETCH NEXT command in a SELECT query is as follow:

The parameters used in the above mentioned syntax are as follows:

Here we have seen the basic essential syntax used with FETCH NEXT command. You may use WHERE, GROUP BY etc. based on your requirement.

Examples of SQL FETCH NEXT

In order to discuss a few examples on FETCH NEXT command, we require a dummy table. Ergo, let’s create a database table called “registrations”. This table contains regis_id, username, city etc. corresponding to each user. Here is the create table statement for the same.

The table has been successfully created. Our next task is to insert a few records in it. We can use the following INSERT statement.

The data in the registration table looks something as follows:

Now we are all set to try a few examples with the help of this table.

a. Find the user details in the first row of the registrations table.

SELECT *
FROM registrations
FETCH NEXT ROWS ONLY;

b. Find the username and city corresponding two the first two rows in the table.

SELECT username,city
FROM registrations
FETCH NEXT 2 ROWS ONLY;

FETCH NEXT with OFFSET

Find the username and city corresponding to the first three records starting from the third row in the registrations table.

SELECT username,city
FROM registrations
OFFSET 2 ROWS
FETCH NEXT 3 ROWS ONLY;

FETCH NEXT with ORDER BY clause

Find the username, city and contact_no corresponding to the next two records starting from the sixth row in the ascendingly ordered registrations table (by username).

FETCH NEXT with WHERE clause

Find the username, city and contact_no corresponding to the first two records such that the users belong to Mumbai.

FETCH NEXT with GROUP BY clause

Find the city with the highest number of total registrations.

FETCH NEXT and CURSORS

Create a cursor for searching the registrations table in descending order of regis_id.

In this example, we have created a cursor called “search_cursor” on the registrations table.

In this post, we have seen the FETCH NEXT command in SQL that is used to retrieve the next specified number of rows from the result set of a SELECT statement.

This is a guide to SQL FETCH NEXT. Here we discuss the introduction to SQL FETCH NEXT along with the examples respectively. You may also have a look at the following articles to learn more –