You will also get verifiable certificates (unique certification number and your unique URL) when you complete each of the courses. We shall learn core concepts of several General-Purpose Programming Languages and developing several applications using them whether it is a scripting language or object-oriented programming language.

What you get in this Programming Languages Training?

To enable great learning experience to all the learners, the course called Programming Languages has been designed in such a way that it contains the complete list of courses and all the chapters listed in the form of course curriculum for the course with the complete course description of each and every course and contents in the format of separate chapters.

This course provides an in-depth range of skills set in the different programming languages which have been used most widely in the Information technology and software industry with comprehensive modules to provide practical knowledge on the programming language which could be applied in a real-time business environment.

The course provides complete knowledge on the understanding of the data types, structures and coding knowledge on various object-based programming languages Python, Core Java, C#, C Programming, R Programming, etc. which is all covered in this course.

The course covers 41 online video training modules and 322+ hours of video tutorials on various object-based programming languages. The whole module that is provided is based on recent trends and growing job opportunities in the software and IT industry.

The course provides 15 real-time hands-on projects with over 26+ hours of project tutorials that have been developed based on the real-time business scenarios to give practical working knowledge on the concepts learned.

On the whole, the course module provides Hands-on training and project experiences that are very helpful for students who want to make a career in the Software and Information technology domain. This course will help you gain knowledge and the complete skill set that is required in the software development and other Information Technology domain. 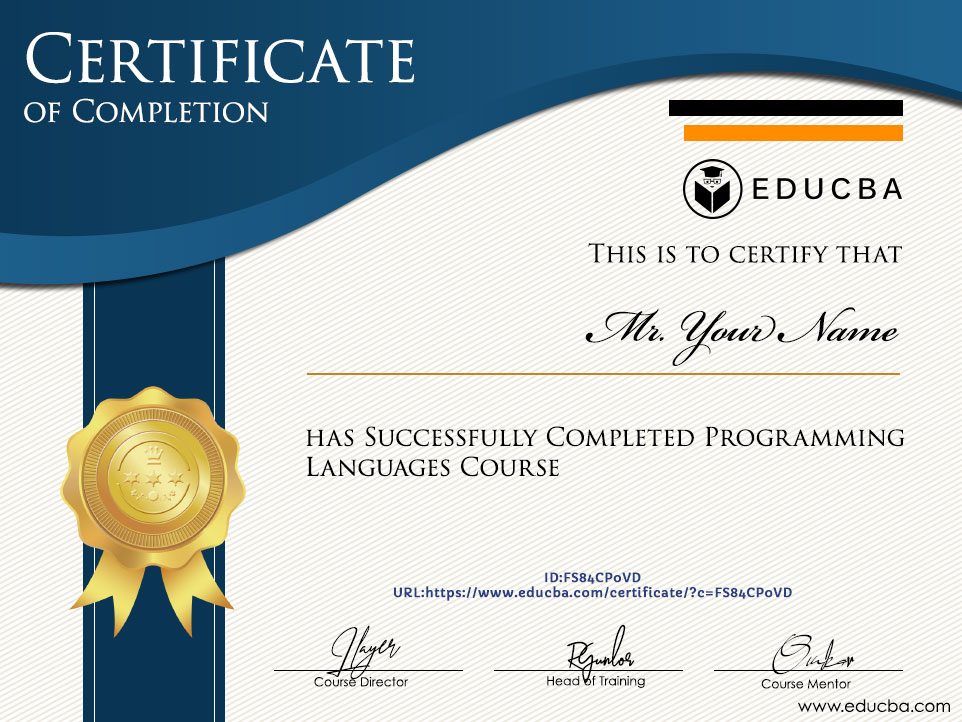 What is a Programming Language?

What tangible skills will I learn from this Programming Languages course?

Why should I choose this Programming Languages certification course?

I don’t have a background in computer science or web development technologies or technical engineering, can this Programming Languages training course still be considered a good option?

Would this programming languages certification add value to my profession?

Yes. this course would definitely add some value to the learners’ profile and also verifiable certifications including different valuable programming languages.

Is this a quick-fix to clear interview or do I still need to practice continuously while learning this Programming Languages certification training?

There are several career benefits upon learning this course and curriculum which are mentioned below:

This programming languages course was pretty good and fairly in-depth. It would have benefitted from some sort of quiz/test at the end of each module (or section). I would recommend it for anyone who wants to get a basic grounding in Python and anyone who wants to see what Python, as a language, can offer.

Excellent – Excellent – Excellent. I Just had to send you a message to say how much I love your site. I use it all the time, it is always clear and concise.
eduCBA has been awesome for me in terms of learning new functions, refreshing myself on old functions I may have forgotten how to use, and I love how you break down how something works into multiple steps.
Linked

I learned a lot about the basics of Java, from variables to lists to basic operators to strings to conditions to loops and functions from this programming languages. This is very useful and helpful. I learned a lot and I can’t wait to continue my pursuit in gaining more experience in the computer science and programming departments.
Linked

Simple, comprehensive and easy to follow. Very well laid out.This course on scala programming was genuinely worthwhile. Tutor had made sure to provide each and every delicate and minute details description in brief to know the things in easy & effective way.
Linked

A very clever guide of how to use some C# functions.
The first video regards what the tutor explains during the entire course.
Then, in the other four videos, the tutor createad some simple methods and explained the performance differences between different type of functions and constructs.
These video are even very useful as a reminder, for example: in case you forgot how to create things like arrays or list, you can just watch the videos and immediately remember how to use them. Awesome programming languages course
Linked