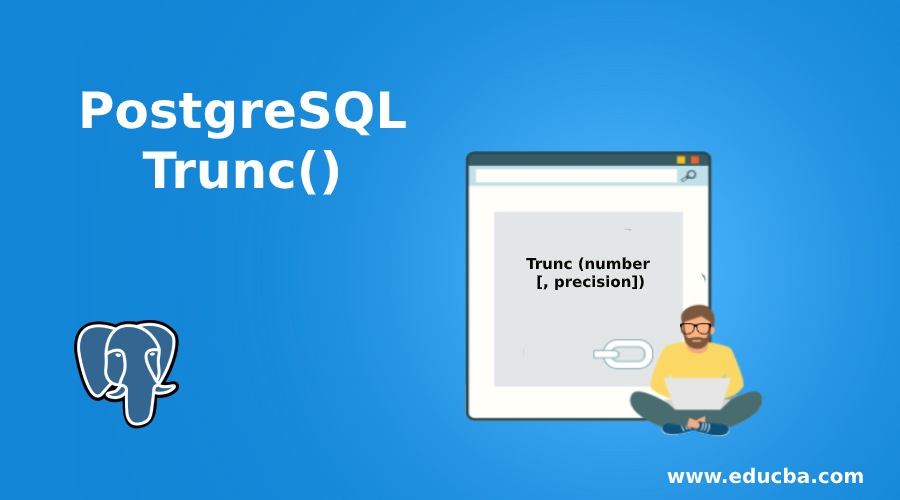 The trunc() function in PostgreSQL is used to truncate the decimal places to a certain precision. It can also return a number which is truncated to the whole number if there is no precision defined. The trunc() function is a mathematical function present in PostgreSQL. This function helps in manipulating numbers as required. The decimals can be modified to decimal places as needed by the project and make use. Let us have a look at the function and its different uses.

The following syntax illustrates the syntax of PostgreSQL trunc() function.

How Trunc() Function Works in PostgreSQL?

Let us have a look at how the trunc() function works.

Examples to Implement TRUNC() in PostgreSQL

We now know what the trunc() function is and how it works. To understand better let us have a look at some examples.

Another example here will eliminate your doubt that if the number is having the digits after the decimal point as 99 will the number be rounded off. Let us take a number: 125.999 and apply the trunc() function to it.

As you can see the result, the number is not rounded off. It simply truncates the numbers after the decimal point.

2. In this example, we will see how the trunc() function works when a positive number is sent in the argument as precision value. We have taken a number 123.456 with the precision of 2. The PostgreSQL statement for this will be as follows:

3. In this example, we will see how the trunc() function works when a negative number is sent in the argument as precision value.

We have taken a number 150.45 with the precision of -2. The PostgreSQL statement for this will be as follows:

4. In this example, we will try to truncate the numbers which are being returned by a query.

The above query takes two tables into consideration. It takes the amount of value from the BL1_RC_RATES table. This column takes decimal values and we truncate it to 2 decimal places. We are also taking the average of this field. The query then takes this averaged and truncated value along with the customer key. The query does inner join between these two given tables. There is also group by clause taken as we are using an aggregation function average which will need a group by clause. We are also using the order by clause and ordering the data on the basis of CUSTOMER_KEY. The output of the above query is as below. 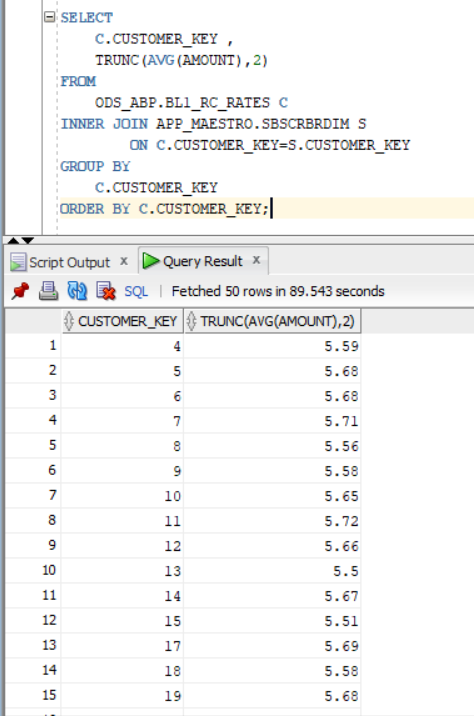 The trunc() function is a very useful mathematical function. You can easily manipulate your mathematical data by making use of this function. The decimal points can be removed at your convenience. It can be upto certain points or completely. This function is widely used when the data is related to telecom, banking, and retail industry. It helps in manipulating numbers as per the user needs and also helps in making a decimal number to a whole number easily.

This is a guide to PostgreSQL Trunc(). Here we also discuss the definition and how trunc() function works in PostgreSQL Trunc() along with different examples and code implementation. You may also have a look at the following articles to learn more –