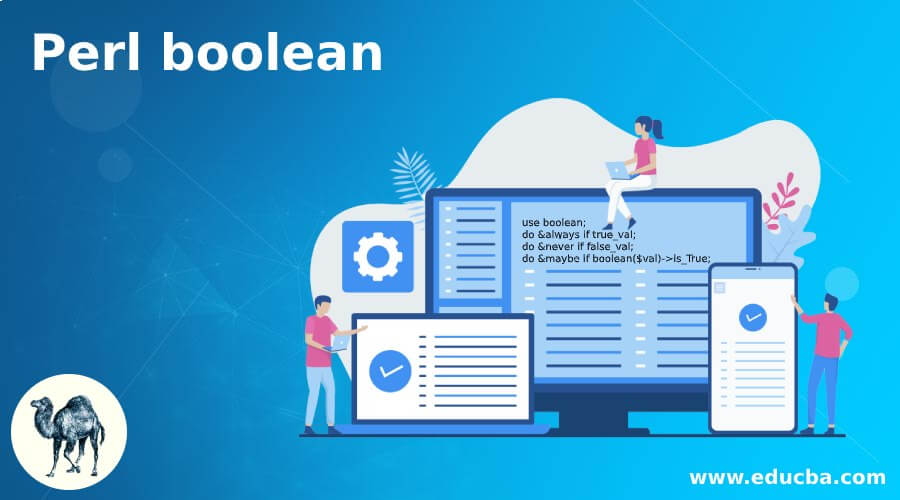 Perl boolean type is a type of value that, unlike other programming languages, behaves differently in a manner where the function using these values returns true or false. Perl programming language is not considered conventional when it comes for making the value as true or false. These values are used only for interpretation and significance that these are boolean values, not the actual values for manipulation. A boolean value is not majorly used in Perl language; rather, it is used only when the typical systems have made use of these as return types for identification and manipulation.

There is no proper syntax, but still, Perl boolean value is used many times wherever the need is to have a native boolean data type instead of scalar values, and its representation is as follows:

The module as boolean makes use of basic as data type which is used for making the entire system comprising f values which is true or false depending on the value.

How boolean Type Works in Perl?

There are many ways to represent the boolean values in Perl for which the programmer depends or work for with the help of making the process of evaluating the conditional checking, system checking and many other factors which depends on the boolean type of Perl. These values are not any kind of special values that need to have value as true or false. On the other hand, there are a number of ways in which the value is being taken care of in terms of boolean.

Given below are the examples of Perl boolean:

This program demonstrates the use of Perl statement, which is used as a conditional statement to check whether the value taken is true or false depending on the scenario and requirement.

This program demonstrates the false values for the variable being assigned a value as 0, as shown in the output.

This program demonstrates the use of undef with the condition in Perl, which is used for giving the output as shown.

This program demonstrates the empty string, which is used for checking the condition with the value to be returned as true or false as shown in the output.

This program is used for demonstrating the values by using warnings or strict as a standard file inclusion for a variable as shown in the output.

There are times when the value as string internally gets converted into the value as 0 and then when compared with the conditional check by evaluation is considered as shown in the output where the string is fed as an input to the value, and then it throws the value as true as shown.

This program demonstrates the use of unary operator ! which is used for making the value as truth from lie with the canonical format that is often used for manipulation.

Perl boolean is a type of boolean value used for making the Perl language use and identifies the return type by other methods and functions as true or false. Overall, Perl boolean, although not used so much significantly but once used, can solve many problems related to conditional check and evaluation, which programmers most often use.

This is a guide to Perl boolean. Here we discuss the introduction, how boolean type works in Perl? Along with examples, respectively. You may also have a look at the following articles to learn more –