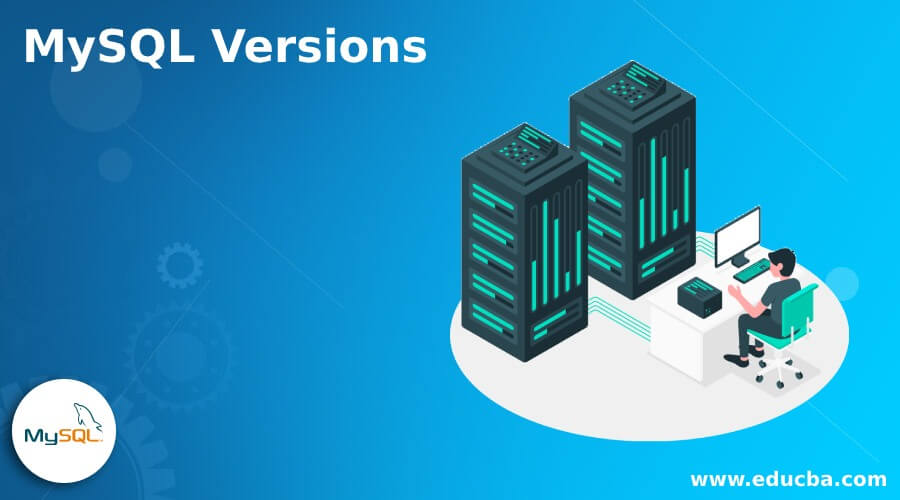 MySQL Versions is a technique that follows a sequence of numbering to track some information on MySQL working for development and maintenance purposes. This is a kind of challenging way to keep updated on the current and upcoming versions which contain improved functions and resolved solutions to any error bugs found in the previous versions.

Normally, versioning is defined as a process of classifying either distinct version numbers or names provided to a distinctive set of any software program whenever it is developed and also released. We use the name version 1.0 to denote the initial release of any program software. There is no decided format rule to be used for version by any industry or company standards and so they are free to use their own planned methods to assign it.

When we want to install the MySQL server in our system, firstly we have to select the version along with the distribution format to apply. You can find two methods for installing the MySQL server Primary one is Development Release, where it contributes the latest feature but is not recommended to be used in the production. The second one is General Availability Release (GA), which defines a stable or, production release and majorly applicable for production. Thus, a user must agree to choose the most current GA release.

For working with MySQL, the recent support is version number v5.8 and it includes several important changes, containing new features addition and removal, fixed bugs as wells as security issues, and so on. This specific version comprises of the release history from ange MySQL 8.0 to MySQL 8.0.21. This means the support is available from April’2018 to April’2026.

This MySQL version denotes the struggle period of the development process where new advanced functions and also incompatibility alterations are expected to be done. Here the developers work out to remove certain errors and try out the new features of the MySQL server.

This attribute defines that the version is completed essentially but still need to be tested thoroughly. Main changes are not predictable.

It says that the previous beta version has become a bit more or less stable and so we can proceed with the goal further to find out the errors and also resolve them.

This final attribute in MySQL version is responsible to have impression for MySQL developers informing that the version is now ready, stable and mature enough to be used for mission critical commitments.

With minor extensions, MySQL developers can be pleased but there may also occur any compatibility problems with several production versions. According to the MySQL documentation, a new MySQL version should always hold alpha status. Again, the status rises to status beta, gamma, and at last production with higher version numbers. Basically, MySQL users and developers must use, which have status production.

In 2008, the MySQL AB was developed by Sun Microsystems. Till MySQL 5.0, the first internal release was on 23 May 1995 but as the documentation the version 5.0 had some short comings that appeared in tables. Again, after release of MySQL version 5.1, it was found that the version support was poor for data warehousing, incorrect result bugs and crashing, and also unsteadiness to operate different CPU cores for handling a single query. Hence, on 27th January 2010, Sun Microsystem was acquired by Oracle.

After that, the following are launched with subsequent improvements and new functions in addition.

Let us see the history of the release of previous MySQL versions listed as follows:

Its released date was 3rd Dec 2010 and the end of support was Dec 2018. It included the releases of MySQL server 5.5 to MySQL server 5.5.62 versions with default storage engine InnoDB supporting referential integrity constraints and transactions and other improved features.

This version was released on 5th Feb 2013 and support ended on Feb 2021. It included the releases of MySQL server 5.6 to MySQL server 5.5.45 versions with enhanced performance to the query optimizer, fresh NoSQL-style memcached APIs, advanced transactional output in InnoDB, TIMSTAMP column type and can accomplish very huge tables, etc.

It was released on 21st Oct 2015 and support will end on Oct 2023. It includes the releases of MySQL server 5.7 to MySQL server 5.6.27 versions consisting of provision for a native JSON data type that is well-defined by RFC 7159.

Note: The MySQL server version 6 has stopped working after the acquisition of Sun Microsystem and now MySQL Cluster product versions 7 and 8 are being used by it. Due to different new and significant features being introduced, the company decided to begin a renewed fresh series for MySQL version. It announced for MySQL 8.0 as the previous version number series 6 and 7 were used before itself.

It defines the production which shows process of stable versions that holds substantial changes generally made with proper plan and corrections over old versions of MySQL or any other software applications. When the version number is increased it indicates some improvements introduced by implementing the new features in the program software, patched security holes and fixing bugs collectively.

This is a guide to MySQL Versions. Here we discuss the introduction along with the different MySQL versions respectively. You may also have a look at the following articles to learn more –