This Appium Training Certification includes 2 comprehensive Appium Course with 7+ hours of video tutorials and Lifetime Access. You get to learn how to execute the Appium test and doing a test case for Native Android App.

The world of testing is huge and there has always been a wide variety of it which never fails to amuse me.  The myriad testing options can always be categorized under the following basic domains, Manual, Automation and Performance Testing. With functional testing comes the responsibility of everything which is related to testing things manually along with the domain level of testing for the businesses as they would be doing if it has nothing to do with the technical side of it. The practice of black box, white box, and grey box and possibly every other kind of testing be it security, accessibility, database, API testing, web service testing, UAT, Agile testing, Blockchain, Big data, Cloud, Advisory, DevOps, Digital Assurance, Guidewire, game, infographics, Regression, Salesforce, Mobile testing, Usability testing, etc.  can all be categorized under the domain of functional or manual testing.  But as you must be fully aware that the world is moving rapidly towards automation, therefore automation tools are used to execute

Automation testing successfully. Some of the automation testing tools would include Selenium for web level of automation testing, HP QTP ( Quality Testing Professional), IBM RFT(Rational Functional Tester), Watir, Sahi, Tricentis TOSCA, Perfecto, APPIUM, etc. The latter tools are the ones that are used to automate mobile scripting and lessen the burden on manual QAs doing mobile testing. The last domain to talk about is performance testing which includes tools like Mercury Load Runner and Jmeter, topping the list of performance testing tools.  This kind of testing ensures that the performance of the website or any other web app which is targeted to be testing is being taken care of and all other parameters such as page hits, page views, website load are all put well in place and ensured that the website does not fail the test when put under load or stress. It encompasses some various levels of testing such as Stress Testing, Load testing, Endurance testing, Volume Testing, etc.

In this section, each module of the Appium Certification Course is explained. 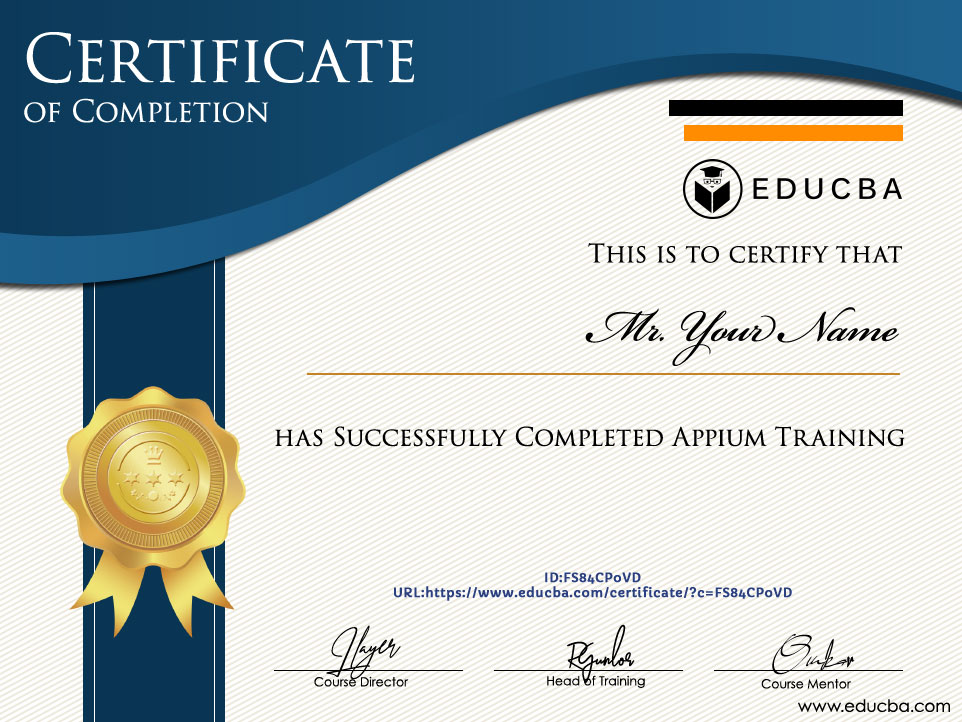 Appium is one of the most popular open-source testing and mobile automation tool which is utilized and used along with hybrid, native and basic mobile apps. It is used to drive iOS and Android applications by making use of WebDriver JSON wire protocol and automation tools such as Selenium web driver. There are many other tools that can be used for automating mobile native apps. Those tools are KIF, Kalabash, MonkeyTalk, Frank, etc. and most of these applications require the use of an extra agent who needs to be compiled along with your application code in order to make the tool interact with mobile apps. So, the problem could be like the app which will be tested and the one which will be submitted will differ as the automation agent libraries such as these will be removed before submitting. A key function that is handled by the Appium is the use of automation native as well as hybrid apps. Appium us a .js node server which makes the handling of such apps much easier. One of the major advantages of these kinds of applications is that the code which needs to be tested will be written in any language such as Ruby on Rails, or any framework. The support for Firefox is in pipeline but at present, it only supports iOS and Android-based apps.

Which tangible skills you will learn in this course?

The primary skill which will be learned in this Appium Certification will be related to automation testing. Testing or the practice of QA will be one of the key integral and essential components of Appium and by taking Appium Testing Training Course one will receive these tangible skills. This Appium Certification course is also aimed to provide you the skills related to selenium and other testing agents which will form an indirect part of the appeal tool.  Other skills related to other automation tools apart from testing will also be provided. Apart from just the technical perspective, the users will also be provided with information related to the business side of the application. The term quality assurance or testing involves the use of domain knowledge also apart from simple technical knowledge without which the testing is said to be incomplete. So, users taking the Appium Testing Training Course will also be given a walkthrough about the various domains they can use these tools.

The ideal target audience for Appium Testing Training Course is anybody who is interested to make use of mobile testing and automation in their businesses. This can include software professionals, such as software engineers, testers, SDETs i.e. Software Developer Engineer in Test, consultants, analysts, manual testing folks, people interested to learn automation testing, Web automation testing people, etc. Apart from the market industry-wide target audience, other sets of people who forms the part of an ideal audience include students, entrepreneurs who are interested in giving their mobile application an entirely different testing experience, owners of startups and MSMEs, etc.

I belong from a manual testing background and interested to switch into automation. Mobile related technologies always fascinate me. Should I take this Appium Certification course?

Yes, of course. We at EDUCA craft the course as per the need of everybody who has null to zero experience but has an interest in learning the technology. Appium Testing Training Course will provide you an in-depth understanding and knowledge of how testing automation tool s work and function. They would serve as the guiding path to you so that you get a jump in your career and do not always stay as a manual tester.

Do I need to keep practicing or this Appium Certification is a one-time thing?

The contents and the concept which are targeted in Appium Testing Training Course are created as such that once you understand them and work on them in detail, you will not require a chance to re-reading the theory and the conceptual part. But in order to do well with the scripts created with automation tools, we recommend you to not lose touch of it as getting yourself upgraded periodically is very beneficial in all domains plus you will be well acquainted with the upcoming technologies and versions for the particular tool. This will serve as an added advantage in your interviews.

The career benefits of the Appium Testing Training Course are many. If you belong from a software testing domain and are into manual testing this course will serve as a boon to you as you will be taught about various automation testing tools and how to use one popular mobile testing tool. If you already belong from an automation testing background, then this tool will be a good add on in your resume as this will target the mobile technologies which are a rare skillset to find among the leagues of software automation testers. If you belong from a third category and do not belong to the domain of testing at all, then this Appium Certification is meant for you as this will directly jump you to the technology which is popular and in high demand these days. You can expect your way and profile getting too high once you start to work with tools such as Appium. We would recommend taking the Appium Testing Training Course.

Great course. Recommended for people needing a refresher. Extreme programming was excellent. The mobile testing portion was very insightful. The instructor was detailed and thorough in explanation. Everyone should take this course if they need a refresher on mobile testing.

This is an awesome course, perfect for learning from scratch, I actually knew some part but it makes me want to learn again. Recommended for people who wanna learn Appium testing from scratch. it’s very easy to understand and implement it to a virtual or real environment for work purpose only.

The training has helped me look into the mind of what a tester would see if he/she were to look at a vulnerable server/computer and how to help administer what a company should do to prevent attacks. Nice experience.