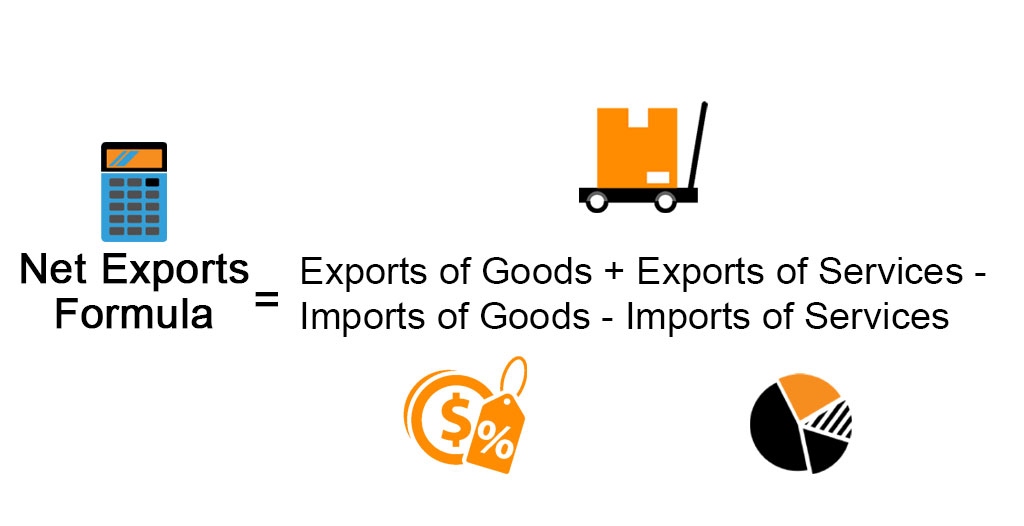 What is Net Exports Formula?

The term “net exports” refers to the aggregate of all that a nation pays for imports from abroad or receives for exports to foreign countries during a certain period of time. In other words, net exports measure the total trade of a nation and as such, it is also known as balance of trade. Consequently, the value of net exports of any nation can be a proxy to assess the financial health of that nation. The formula for net exports can be derived by adding up the value of exports of goods and exports of services minus the value of imports of goods and imports of services. Mathematically, it is represented as,

Let’s take an example to understand the calculation of Net Exports in a better manner.

Let us take the case of the below mentioned anonymized country to illustrate the computation of net exports. According to the recently published balance of trade, the following information is available, Calculate the next exports of the country on the basis of the given information.

Net Exports is calculated using the formula given below 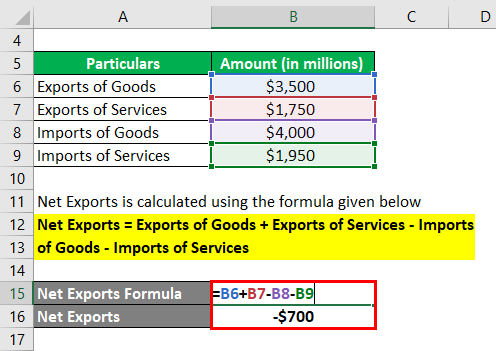 Therefore, the country is currently on a trade deficit of $700 million due to a higher value of imports vis-à-vis exports.

Let us now take the example of the US to illustrate the computation of net exports for an actual country. As per the data published by the US government on February 28, 2019, the following information is available for the year 2018. Calculate the net exports of the US for the year 2018 on the basis of the given information. Also, comment if the economy is trading in surplus or deficit.

Net Exports is calculated using the formula given below

Therefore, given information indicates that the US had a trade deficit of $625.6 billion during 2018 primarily due to the higher value of imports of goods.

The formula for net exports can be derived by using the following steps:

Step 1: Firstly, determine the value of finish goods exported to foreign countries by the manufacturing companies of the country.

Step 2: Next, determine the value of services provided to the foreign nations by the service-based companies. For example, IT support, KPOs, etc.

Step 3: Next, determine the value of finish goods imported from foreign countries.

Step 4: Next, determine the value of services of the foreign countries availed by the domestic players.

Relevance and Use of Net Exports Formula

It is very important to understand the concept of net exports because it is considered one of the crucial variables for calculating the gross domestic product (GDP) of any country. Also, the value of net exports of any nation can be a leading indicator of the financial health of that nation.

If the net exports of a nation are negative, then it is known as trade deficit which indicates that the country’s imports of goods and services from the foreign nation are higher than its exports to them. Such a situation may force a country to borrow funds from other countries in case it is unable to pay for its net imports. In the long run, it may not be desirable as the country will become a net consumer, which may force it to go deeper into the debt trap in order to fund its net consumption, which means it will have a lesser amount of funds available for its own future economic growth.

On the other hand, if the net exports of a nation are positive, then it is known as trade surplus which indicates that the country’s exports of goods and services to foreign countries are higher than its imports from them. Such countries have more than enough potential to pay for their domestic consumption, but their economy may be too dependent on exports. As such, the risk of export-oriented can be mitigated by developing a large domestic market that can guard it’s country’s economy against the impacts of exchange rate fluctuations, trade war among nations or other catastrophic developments in their consumer countries.

You can use the following Net Exports Formula Calculator