This After Effects Training includes 1 courses, 3 Projects with 20+ hours of video tutorials and Lifetime access.

You will also get verifiable certificates (unique certification number and your unique URL) when you complete each of the 3 After Effects courses. This course is anyone who wants to learn video editing, compositing, creating videos,videos effects using this sophiticated tool.

Rotoscopying Projects on After Effects

Compositing Projects on After Effects

Tracking Projects on After Effects

What you get in this After Effects Training?

About After Effects Training Course

To make things easy for you, here’s a comprehensive After Effects Training Course. Before we ever talk about the target audience, FAQs, let’s look at the course curriculum in detail –

After Effects Course – Certificate of Completion 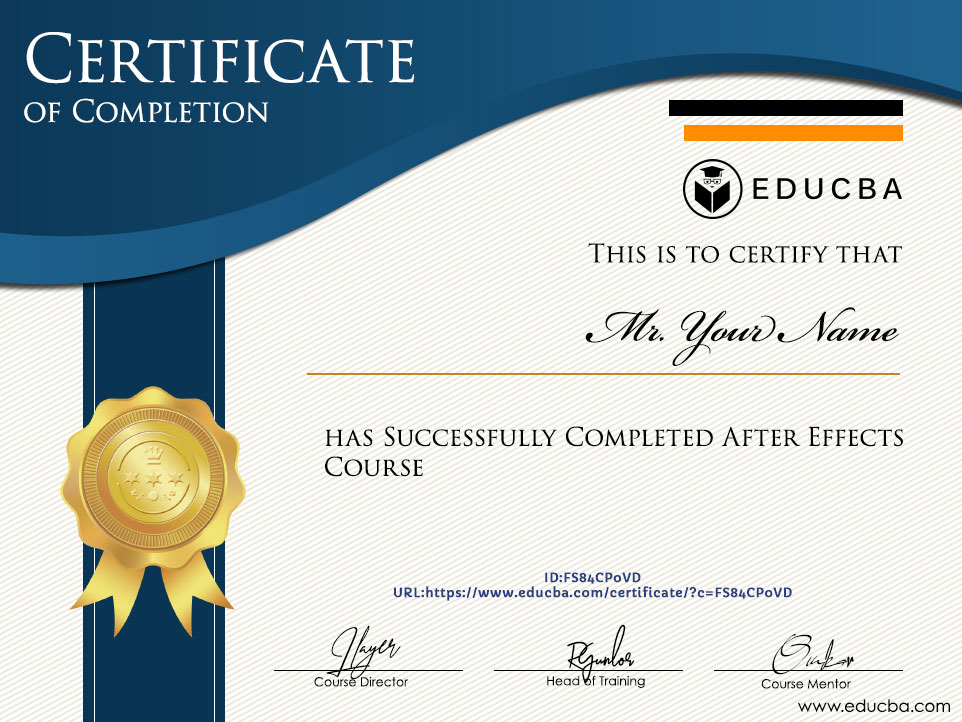 What is After Effects?

After Effects is an application for visual effects, motion graphics and compositing in 2D and 3D developed and serviced by Adobe Systems. After-effects are used in the post-production of films, Advertisement making, television broadcasting, travel film, titles and many more with smart video editing effects, rendering, compositing, motion tracking, keying, and animation.

It’s easy to edit videos and adding text and audio to frames with keying options for playing all simultaneously. The latest release had High Definition Rendering footage creating and exporting options. Few users preferred plug-ins are also available as per requirements. 3D and 4D rendering are also available

All Photoshop, illustration, and Adobe formats are accessible for importing and editing them in the video. There is an after-effects temple for video and text which creates an effective look of edit with premiere pro compositing option for each effect. The shape layers, masks, tools, keying, expression and presets are used to make the video as best output as required.

After-effects are called Photoshop of video, the video taken will be opened as it is whether its 4K, Drone shot or 24 frames per second with timelines matched along with the video. Compositions can be edited and modified easily. Quick render time has many resolution values. Camera angle, light effects, color concerns, null object and many other objects to make the video interesting.

After-effects are highly used in movie making for imposable stunts, mix and run 2 or more videos by cleaning all unwanted subjects using masks and retaining the subjects wanted in a video. Improving quality and visual standards within the video. Green mats and other solid colors that are used in television broadcasting or VFX movie making can be removed easily and add the required background as per frame.

Average Salary$17 per hour
The average salary for a Graphic Designer is $17.05 per hour in the United States.
[Source - Indeed]

Which skills you will learn in this After Effects course?

Why should I do this After effects training?

Please check the curriculum for the details, of course, this After Effects course helps in making the career mark in motion graphic, video editing, advertisement making. 2d and 3d animation effects can be added the real-time user will know it.

I am an engineer can I do this After effects training course?

No, but before if you are familiar with Photoshop, Illustration it’s easy to handle and understand the basics of after-effects as the interface windows and tool handling are pretty similar and help to learn the course.

How is after effects different from other software in competition?

To know this difference you should pursue the course to experience the difference, for example, review a few videos which are available before and after After effects making.

Do we have relevant job openings in India?

Yes, we do have job openings in India as there are any feature films, animation movies, Advertisements, etc which need motion graphs, VFX, 2D and 3D designing and animation with graphics and effects with best output of video for visual ultimate’s.

Would this After Effects training course help me in my career building?

Yes, After effects are going to add values to ideas and bring them to reality in the form of video as required. There is also good growth in the market of animation and graphics for multiple areas in the market in movie making, advertising, broadcasting, etc

After effects course is the best one for motion graphics, VFX, Video effects, compositing and feel. The curriculum has all set of properties available in after effects. This course at the right time added values to me. I would recommend this after effects training to my colleges.

My After Effects Course Experience

Had valuable time for upskilling with after effects. I could compare myself after learning the course. The effects, keying and framing of video bites are quite interesting. The After Effects course has reasonable time and successful technical learning on the interface with the examples of real-time use age of after-effects is well explained. I suggest this After Effects course for student how is learning animation 2D and 3D.